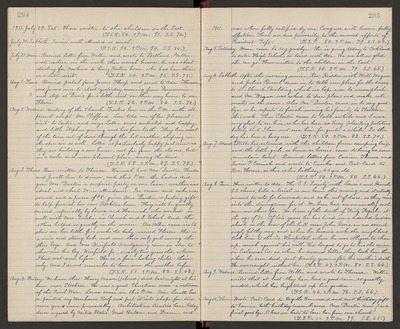 July 31. Mon. Received letter from Willie and wrote to Portland. Willie wrote earlier in the week than usual because he was about starting for Nashua to bring Walter home, who had been there on a little visit. (T.S.R. 60. 2 P.M. 95. S.S. 75.)

Aug. 1. Tues. Received postal from James Thorp and wrote to Ada. Theresa and James were to start yesterday morning from Dunsmuir and stop at Davis for a little visit on their way home to see Flossie. (T.S.R. 52. 2 P.M. 86. S.S. 72.)

Aug. 2. Wednes. Meeting of the Church Trustees here in the P.M. with all present except Mr. Clifford. Low told me of her pleasant visit to Exeter, and says Lottie seems contented and happy, and little Stephen growing and has four teeth. They live most of the time out of doors through the hot weather, sleeping in the open air as well. Lottie is particularly happy just now as they are building a new house, not far from the old one, but in a cooler and more pleasant place, among the trees. (T.S.R. 58. 2 P.M. 87. S.S. 73.)

Aug. 3. Thurs. Have written to Theresa. Hannah had Mrs. Dustin, Freda and Jewett here to dinner, and this P.M. the ladies Aid gave Mrs. Dustin a surprise party on our lawn - weather was ideal and about 30 in attendance. Ice cream and cake were served and a purse of $8. given Mrs. Dustin a parting gift to help furnish her new Stockton home. They will be greatly missed, especially by Laura and Hannah, who worked so well with Mrs. Dustin in Church and S. School. And the others helped so greatly in the music. Ora Allen came into show me her little five week's old baby, named Flossie. She is a nice and strong babe and now their only girl among the three boys. And Mrs. Winfield Montgomery came in also to show me her boy. Winfield, Jr., nearly two years old, whom I had not seen before. He is a fine - looking child - their only. And I do not remember to have seen the mother before. (T.S.R. 51. 2 P.M. 82. S.S. 68.)

Aug. 4. Friday. We learn that Henry Mason (colored) died last night at his home near Stockton. He was a good Christian man - a veteran of the Civil War. Laura came in this P.M. Mr. Lovett has re-painted my Warehouse Roof and put it into shape, for two more years wear, presumably. Arbitration treaties have today been signed by United States, Great Britain and France, and

Aug. 6. Sabbath. After the morning services, Rev. Kidder with Will Wagner and Julius Bruml came in to talk over plans for the Annex to the Church Building which we hope soon to accomplish and Mr. Wagner was asked to draw plans and make estimates on the same. Also Mr. Dustin came into say goodbye, as he expects to finish moving his family to Stockton this week. Then Chester came to talk awhile I was very glad to see him, as he has been so busy planting potatoes lately that I have not seen him for quite a while. So the day has been a busy one. (T.S.R. 50. 2 P.M. 83. S.S. 70.)

Aug. 7. Mond. Estella has returned with the children from camping trip and the little girls, as brown as berries, came to bring us some mountain trout. Received letters from Eunice, Theresa and Susie P. Cornish and wrote to Eureka and Post-Card to Bro. Horace, as this is his birthday, 64 yrs. old. (T.S.R. 50. 2 P.M. 80. S.S. 66.)

Aug. 8. Tues. Have written to Ada. The C.E Society with Laura's and Hannah's S.S. classes, held a Social on our lawn this evening and it actually seemed too cold for lemonade and cake out - of - doors, so they came into the dining room form it. We have had an unusually cool summer thus far. We learn of the death of Fritz Fogarle, at the age of 72. Of late years he has lived in a deserted Indian shack on the brow of the hill near John Keri's, in an exceedingly filthy way, and when he became sick the neighbors took him to the Co. Hospital, where he was obliged to clean up, much against his will. He longed to go to his old mine in Calaveras Co. so when he seemed better they took him there where he soon died, just twenty years after his mother's death. He was naught without her. (T.S.R. 47. 2 P.M. 80. S.S. 66.)