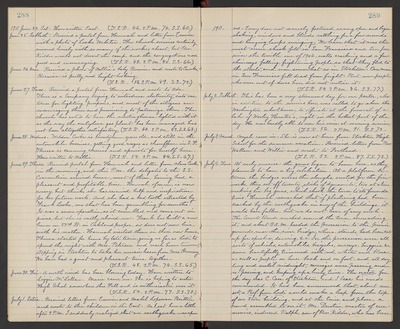 June 25. Sabbath. Received a postal from Hannah and letter from Eunice with a photo of Locke Webster. The church services certainly seemed lonely with so many of the workers absent, but Rev. Kidder would not desert the camp, and the congregations were good and encouraging. (T.S.R. 48. 2 P.M. 80. S.S. 66.)

June 27. Tues. Received a postal from Hannah and wrote to Ada. There is a Company trying to introduce electricity into our town for lighting purposes, and most of the citizens are encouraging them and promising to patronize them. The church has voted to have the meeting house lighted with it as the way the acetylene gas plant has been managed has not been altogether satisfactory. (T.S.R. 60. 2 P.M. 83. S.S. 68.)

June 28. Wednes. Weldon Cooke is twenty seven years old, and still in the automobile business, getting good wages as chauffeur in S.F. Theresa is canning cherries and apricots for herself here. Have written to Nellie. (T.S.R. 54. 2 P.M. 84. S.S. 67.)

June 29. Thurs. Received postal from Hannah and letter from Alma Cooke in the morning, and this P.M. the delegates to the S.S. Convention arrived home, most of them, having had a pleasant and profitable time. Hannah of course, is now weary, but thinks she has received help and inspiration for her future work. And she had a bad tooth extracted by Frank Locke, one that has been grumbling for months. It was a severe operation, as it crumbled and came out in pieces, but she is vastly relieved now. Frank has built a new house on 53rd St. in Oakland proper, so does not now live with his mother. Hannah visited them in their new home. Theresa started for home by late train, going as far as Lodi to spend the night with Mrs. Petersen and reach home tomorrow, stopping in Stockton to take her music lesson from Mrs. Hennery. We have had a quiet and pleasant time together. (T.S.R. 48. 2 P.M. 74. S.S. 65.)

July 1. Satur. Received letters from Eunice and Mabel Lopeman Brittin and wrote to the children in the East. As I sat here a little after 2 P.M. I suddenly realized that an earthquake was upon

1911. us. Every door not securely fastened swing open and began shaking, windows and blinds rattling for a few seconds and hanging lamps swinging. We learn that it was the most severe shock felt in San Francisco and San Jose since the terrible one of 1906, walls cracking and a few chimneys falling, frightening people so that they fled to the streets, and even somewhat so in Stockton. One man in San Francisco fell dead from fright. But some people who were out of doors here did not notice it. (T.S.R. 54. 2 P.M. 86. S.S. 77.)

July 2. Sabbath. This has been a very strenuous day for our pastor, who in addition to the services here, was called to go above the Washington school house, to officiate at the funeral of a babe of Wesley Hunter's, right in the hottest part of the day. he was hardly able to use his voice at evening service. (T.S.R. 56. 2 P.M. 91. S.S. 72.)

July 4. Tues. At early sunrise the guns began to boom here, as they planned to have a big celebration. At a platform between the bridges across the sloughs, erected for the fireworks, they set off twenty sticks of dynamite, two at a time making ten big guns, which shook the town to its foundations. Hannah remarked that if plastering had been cracked by the earthquake in any of the buildings, it would have fallen, but we do not hear of any such. The Cornet Band mached around the town, serenading it, and about 11 A.M. headed the procession to the picnic grounds near the river bridge, where stands had been set up for speaker, dancing, &.c. In the procession were all sorts of vehicles, automobiles, bicycles, surreys, buggies, &.c. some beautifully trimmed with red, white and blue, as well as people on horse-back and on foot, and all day long and until midnight, carriages were passing and re-passing, and keeping up a lively time. The orator for the day was C. Case of Stockton, and I hear his words commended. It had been announced that, about sunset, a Prof. from Lodi would make a leap from the top of our Store building, and at the time and place, a crowd assembled to see it. Mr. Dustin, master of ceremonies, induced Ralph, son of Rev. Kidder, who has been