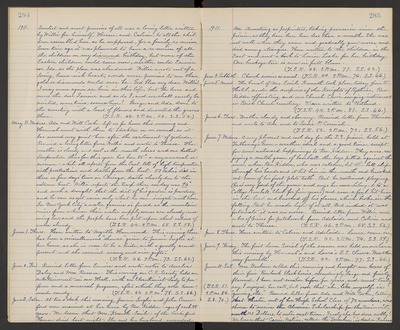 1911. Sweetest and most precious of all was a loving letter written by Willie for himself, Horace and Calvin, to all the children assembled here, as he supposed, for a family re-union. Sometime ago, it was planned to have a re-union of all the children on my diamond birthday, but none of the Eastern children could come now, neither could Eunice nor Ida, so the plan was abandoned. Willie wrote out of a loving, home-sick heart, words more precious to me than gold or diamonds could ever be. God bless my dear Willie. I may never again see him in this life, but He loves and serves the dear Saviour and so do I, and we shall surely be united, sometime, somewhere! George and Ada drove to the cemetery with a load of flowers and decorated the graves there. (T.S.R. 44. 2 P.M. 64. S.S. 54.)

May 31. Wednes. Ada and Will Cooke left us for home this morning and Hannah went with them to Stockton on a errand, so it has seemed very quiet here after the excitement of yesterday. Received a loving letter from Willie and wrote to Theresa. The weather is cloudy and cool as the month closes and our hottest temperature thus far this year has been 85-, a very unusual occurrence - while all reports from the East tell of high temperature with prostrations and deaths from the heat. 53 babies died in three or four days time in Chicago, deaths clearly due to the extreme heat. Willie reports the temp. there one day was 96- and such a drought that the dirt of his garden is powdery and he can as yet raise only what he can irrigate with hose. In New York City a water famine is feared as the mountain rivers from whence their water supply comes are already running low, and the people have been put upon short rations of water already. (T.S.R. 44. 2 P.M. 68. S.S. 58.)

June 1. Thurs. Have written to Myrtle Hammond. This evening there has been a miscellaneous "shower" given to Jennie Inglis at her home, as she is soon to be a bride, with a goodly crowd present, and she received many and nice gifts. (T.S.R. 46. 2 P.M. 73. S.S. 62.)

June 2. Fri. Received letter from Eunice and wrote notes to Amelia Daley and Mrs. Russem. This evening our C.E. Society held an entertainment in our Hall, with an Elocutionist lady to perform and a musical program, after which they sold home-made candy. (T.S.R. 44. 2 P.M. 78. S.S. 66.)

June 3. Satur. At ten o'clock this morning, Jennie Inglis and John Crawford were married at her home by Rev. Kidder, ages of each 48 years. We learn that Mrs. Knauth - Emile - of the Lockeford House died last night. She and her husband succeeded

1911. Mr. Armstrong as proprietors, taking possession since the picnic, so they have been here less than a month. She was not well when they came and gradually grew worse and died among strangers. Have written to the children in the East and sent a book to Louise Locke for her birthday. Our buckeye tree is now in full bloom. (T.S.R. 48. 2 P.M. 77. S.S. 62.)

June 5. Mond. The burial of Mrs. Emile Knauth took place today from the Hotel, under the auspices of the Knights of Pythias, Rev. Kidder officiating, and our Church Choir singing - interment in Brick Church cemetery. Have written to Portland. (T.S.R. 44. 2 P.M. 81. S.S. 66.)

June 7. Wednes. A very pleasant and cool day for the S.S. picnic held at Tretheway's Grove - weather ideal and a good time, except for some untoward happenings to Rev. Kidder. They were enjoying a match game of baseball, the boys pitted against the men, when Rev. Kidder, who was catcher, let the ball slip through his hands and it hit him in the mouth and knocked out some of his front plate teeth. But he continued playing (he is very fond of the game and says he once belonged to a College Baseball Club for five years) and soon a foul hit him in the head and knocked off his glasses, which broke in the falling. But he made light of it all. And indeed it was fortunate it was no worse. Received letter from Willie and a box of pieces for patchwork from Adelaide and Calvin and wrote to Theresa. (T.S.R. 46. 2 P.M. 68. S.S. 56.)

June 10. Sat. Mrs. Barbour called this morning and brought one boxes of their fine Burbank blackberries, exceedingly large and finely flavored. I have not seen her before for years, and must truly say, I enjoyed her call, but note that she, like myself, is "growing old". Received letter from Ada and Will Cooke, telling that Hester, out of her High School Class of 72 members, was chosen to received the Alumni Scholarship for the University worth 125 Dollars, to enter next term. Surely she has done nobly! We learn that Carrie Nation, called the "Smasher", is dead in Kansas (T.S.R. 51. 2 P.M. 86. S.S. 70.)