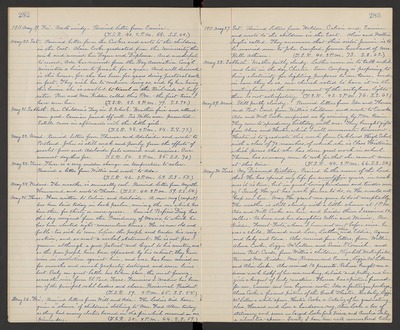 May 20. Sat. Received letter from the Cookes and wrote to the children in the East. Alma Cooke graduated from the University this week and received her Degree and Diploma - And wonderful to record, Ada has received from the Bay Association Cong'l Ministers a license to preach for a year. And well deserved is this honor, for she has been for years doing pastoral work in fact. They wish her to continue doing so, and by her having this license she is enabled to travel on the Railroads at half rates. Rev. and Mrs. Kidder called this P.M. - the first-time I have seen her. (T.S.R. 43. 2 P.M. 79. S.S. 72.)

May 22. Mond. Received letters from Theresa and Adelaide and wrote to Portland. John is still weak and poorly from the effects of scarlet fever and Adelaide feels worried and anxious. Our warmest day thus far. T.S.R. 50. 2 P.M. 85. S.S. 70.)

May 25. Thurs. Have written to Calvin and Adelaide. A new rug (carpet) has been laid today in back parlor, covering the one which has been there for thirty or more years. General Porfirio Diaz has this day resigned from the Presidency of Mexico, to which he has been elected eight consecutive times. He is now old and feeble - too sick to come before the people and tender his resignation, and so sent a verbal statement. He is not progressive although a good patriot and loyal to his country, and as the poor people have been oppressed by his cabinet, they have risen in revolution against him, and was has been carried on for months and much property destroyed and some lives lost. Only great battle has taken place, the one at Jaurez, across the river from El Paso, Texas. Francisco I. Madero has been one of the principal rebel leaders and chosen Provisional President. (T.S.R. 59. 2 P.M. 65. S.S. 55.)

1911. May 27. Sat. Received letters from Weldon, Calvin and Eunice and wrote to the children in the East. Alice and Nellie Inglis called. They announce that their sister Jennie is to be married soon to John Crawford, former husband of Mrs. Belle Athearn. (T.S.R. 40. 2 P.M. 73. S.S. 62.)

May 28. Sabbath. Weather partly cloudy. Luther came in to talk awhile and later in the day, Chester. Some company is proposing to bring electricity for lightning purposes to our town, and in care they do so, our church voted to have it in the meeting house, as the management of the acetylene lights there is not satisfactory. (T.S.R. 42. 2 P.M. 76. S.S. 62.)

May 29. Mond. Still partly cloudy. Received letters from Ida and Theresa and Post-Card from Willie's children and wrote to Eureka Ada and Will Cooke surprised us by arriving by P.M. train. They come to spend my birthday with me. They brought gifts from Alma and Hester, which I will enumerate tomorrow - Hester is to graduate this week from Oakland High School with a class of 72 members, of which she is Class Historian which proves that she has done good work in school. Theresa has so many men to cook for that she cannot come at this time. (T.S.R. 44. 2 P.M. 66. S.S. 54.)

May 30. Tues. My Diamond Birthday. Praised be the name of the Lord that He has spared my life for seventyfive years, in weakness it is true, but in great loving kindness and tender mercy! Surely He yet has work for me to do, or He would not keep me here. May He grant me grace to do it acceptably. The weather is still cloudy with a little shower at 1 P.M. Ada and Will Cooke are here and besides them I received 12 callers. Rebecca and her daughters Nellie and Winnie, Rev. Kidder, Forrest Foote, whom I have not met before since he was a child, Howard and Lou, Luther Alice and Eddie, Agnes and baby and Edna. Also received four letters, from Willie, Alma Cooke, Lizzie McLellan and Susie P. Cornish, and seven Post-Cards, from Willie's children, Elizabeth Westerfield, Rev. and Mrs. Kidder, Mrs. Russem and Emma, Lizzie McLellan and Alice Cooke. Also received 12 presents. Rebecca brought me a drawn-work hdkf. of her own making, delicate and pretty, and her girls a bouquet of lovely carnations. Theresa has a picture framed for me, Eunice sent me begonia roots, Ida a fertilizer package, Alma Cooke a framed picture of the Greek Theater, Berkeley, Lizzie McLellan a white apron, Hester Cooke a Catalog of her graduating class, Howard and Lou a handsome rug, Alice Locke a box of stationery and some enlarged Lockeford Views, and Amelia Daley a silver tea-spoon - Surely I have been well remembered today.