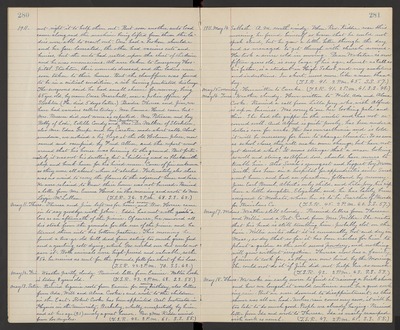 1911. not right it to help them out. But soon another auto load came along and the machine being lifted from them the ladies were able to crawl out. One had a broken shoulder and her face lacerated, the other had various cuts and bruises, but the auto had rested upon the chest of the driver and he was unconscious. All were taken to Emergency Hospital, Stockton, their wounds decreased, and the ladies were soon taken to their homes. But the chauffeur was found to be in a critical condition, a rib having penetrated his lungs. The surgeons said he had small chance for recovery, being 65 yrs. old, by name Oscar Marshall, once a police officer of Stockton. (He died 5 days later.) Besides Theresa and Jim, we have had various callers today. Mrs. Emma Hurd came but Mrs. Russem did not come as expected. Mrs. Petersen and boy Bobby of Lodi, Estelle Condy and Mrs. Snyder Mrs. Dr. Walker of Stockton, also Mrs. Edna Grupe and boy Carsten made short calls. About sundown, we noticed a big blaze at the old Holman place, now owned and occupied by Fred Allen, and the report went around that his house was burning to the ground. But fortunately it was not his dwelling but a building used as blacksmith shop and bunk-house for his hired men. Caused of fire unknown so they were all absent when it started. Fortunately also there was no wind to carry the flames to the adjacent house and barn. We were relieved to know their home was not burned. Received a letter from Mrs. Emma Hurd in the morning and wrote to Mrs. Lizzie McLellan. (T.S.R. 36. 2 P.M. 68. S.S. 62.)

May 11. Thurs. Theresa and Jim left us for home this morn - and Bro. Horace came in to say goodbye with John. Eddie has met with a quite a loss as an aftermath of the picnic. Of course, he removed all his stock from the grounds for the use of the picnic and he turned them into his bottom pasture. This morning he found a two-yr-old bull dead from eating too much green feed and a yearling colt dying, which Geo. worked over but could not save it. Both animals were high-priced and valuable, so the $50. he receives as rent for the grounds, falls far short of his loss. (T.S.R. 42. 2 P.M. 70. S.S. 62.)

May 13. Satur. Received begonia roots from Eunice for my coming birthday, also letters from Ada, Will and Alma Cooke, and wrote to the children in the East. Robert Cooke has been appointed Asst. Instructor in Physics in the University, Berkeley, wholly unexpectedly by him, and at his age (21) surely a great honor. Rev. & Mrs. Kidder arrived from Los Angeles. (T.S.R. 42. 2 P.M. 61. S.S. 55.)

1911. May 14. Sabbath. A.M. north windy. When Rev. Kidder rose this morning he found himself so hoarse that he could not speak aloud, but he grew a little better through the day and so managed to get through with church services - He took a severe cold in moving. Dean Webster is now fifteen years old, is very large of his age, almost as tall as his father, is a student in High School, and very ambitious and industrious. In short, seems more like a man than a boy. (T.S.R. 41. 2 P.M. 65. S.S. 57.)

May 16. Tues. Weather cloudy. Have written to Will, Ada and Alma Cooke. Received a call from Lilla Jory, who, with Alfred is up on business. Was sorry to see her looking pale and thin. She had the grippe in the winter and has not recovered well. And Alfred is quite poorly, has been under a doctor's care for weeks. He has neurasthenia and is told it will be necessary for him to change climate. So as soon as school closes, they will make some change, but have not yet decided what. It seems strange that a man looking so well and strong as Alfred does, should have nerves to trouble him. Also Sarah's youngest and biggest boy, Warren Smith, has been in a hospital for appendicitis since Sarah went home, and had an operation, followed by recovery - Jesse Earl Bruml, Albert's only child, and Lila Joey, his wife have a little daughter, Elizabeth, and he has lately been assigned to Modesto, where he is to be Searcher of Records. for Stanislaus Co. (T.S.R. 45. 2 P.M. 60. S.S. 57.)

May 17. Wednes. Weather still cloudy. Received letters from Theresa and Willie and a Post-Card from Mrs. Miller. She writes that his head is still troubling him - probably clot on the brain. Willie writes that it is unusually hot and dry in Mass., so dry that so far it has been useless for him to plant a garden as the soil seems powdery, and nothing will grow without irrigation. Theresa now has a family of nine to cook for, as they are now hired by the Moreings. She could not do it if Jim did not help her so much. (T.S.R. 42. 2 P.M. 63. S.S. 53.)

May 18. Thurs. We woke in early morn to find it raining a brisk shower and how we longed it would continue and be a good soaking rain. But we were doomed to disappointment, as this shower was all we had. Unless rain comes very soon, it will be too late to do much good. People are already haying. Received letters from Ida and wrote to Theresa. Ida is nearly swamped with work as usual. (T.S.R. 47. 2 P.M. 61. S.S. 55.)