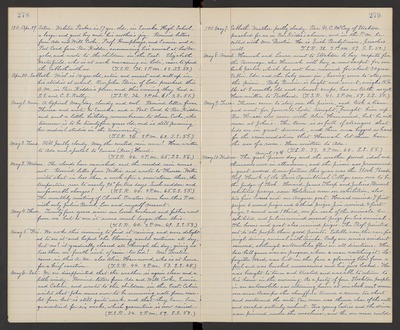 1911. Apr. 29. Satur. Webster Parker is 17 yrs. old, in Eureka High School, a large and good boy and his mother's joy - Received letters from Ada and Will Cooke, Prof. Humphreys, and Eunice and a Post Card from Rev. Kidder, announcing his arrival at Los Angeles, and wrote to the children in the East. Elizabeth Westerfield, who is at work canvassing in Lodi, came to spend the Sabbath with us. (T.S.R. 36. 2 P.M. 62. S.S. 52.)

May 1. Mon. A typical May - day, cloudy and cool. Received letter from Theresa and wrote to Eureka and a Post Card to Rev. Kidder and sent a little birthday remembrance to Alma Cooke, who tomorrow is to be twentyfour years old, and is still pursuing her medical studies in the University. (T.S.R. 36. 2 P.M. 62. S.S. 55.)

May 3. Wednes. The clouds have vanished and the needed rain comes not. Received letter from Willie and wrote to Theresa. Willie writes that in less than a week after a snow storm there, the temperature rose to nearly 90- for two days. Such sudden and unfavorable changes! (T.S.R. 40. 2 P.M. 65. S.S. 55.) The monthly meeting Church Trustees cam here this P.M. with only Justin Bruml, Lou and myself present

May 5. Fri. We woke this morning to find it raining and were delighted to see it and hoped the blessing would continue all day, but no! it gradually cleared all through the day, giving us less than one-fourth inch of rain - too bad! Mr. Dustin came in this A.M. also Alice Hammond, who is at home for a brief vacation. (T.S.R. 44. 2 P.M. 53. S.S. 48.)

May 6. Sat. We are disappointed that the weather is again clear and a little windy - Received letters from Ada and Will Cooke, Eunice and Calvin, and wrote to the children, in the East. Calvin writes that John seems now to be recovering well from scarlet fever but is still quite weak, and that they have been quarantined for six weeks, which quarantine is now raised. (T.S.R. 34. 2 P.M. 59. S.S. 53.)

May 8. Mond. Hannah and Laura went to Stockton to buy carpets for the Parsonage, also Hannah will buy a new carpet for our back parlor, which has not been renewed for about 30 years. Nellie, Edw. and the baby came in, having come to stay over the picnic. Baby Bernice is bright and smart, weighs 18 1/2 lbs. at 8 months old and almost creeps, has no teeth as yet. Have written to Portland. (T.S.R. 41. 2 P.M. 59. S.S. 50.)

May 9. Tues. Theresa came to stay over the picnic, and took a team and went for James to Lodi tonight, and brought him up. Bro. Horace also came with Alice Hammond, but he will room at John's. The town is so full of strangers that beds are in great demand, and three men begged so hard for the accommodation that Hannah let them have the use of a room. Have written to Ada. (T.S.R. 37. 2 P.M. 60. S.S. 55.)

May 10. Wednes. The great Annual 12th picnic day and the weather proved ideal and thousands were in attendance, and the picnic was pronounced a great success. A new feature this year was the Stock Parade. Prof. Hawk of the Davis Agricultural College cam over to be the Judge of Stock. Howard, James Thorp and Julius Bruml exhibited Jerseys, some Holsteins were on exhibition, also two fine horses and one Angora goat. Howard received 7 first prizes, 6 second prizes and 6 third prizes. Jim received 2 fist prizes, 2 second and 1 third, one for each of the animals he exhibited, and Julius received second prize for his animal. The horses and goat also received prizes. The Prof. pointed out to the people their good points. Estelle won the race for single driving animal with Sincho. Only one serious accident occurred, although automobiles flew in all directions. The base-ball game was in progress, when a man watching it, Lafayette Ward, was hit in the face a glancing blow from a foul and was knocked unconscious and his jaws locked. He was brought to town and treated and was able to return to his home in the morning. As a party of four Stockton people in an automobile was returning home at one 'clock next morn over near Acampo the chauffeur turned a corner too short and overturned the auto. One man was thrown clear of the auto and escaped entirely unhurt. Two young ladies and the driver were pinned under the machine, and the one man could