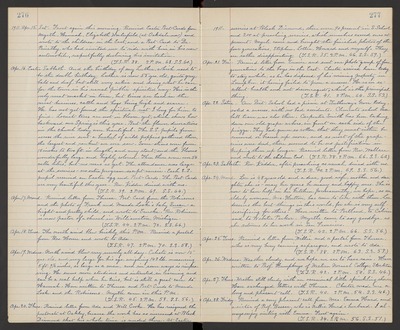 1911. Apr. 15. Sat. Frost again this morning. Received Easter Post-Cards from Myrtle, Hannah, Elizabeth Westerfield (at Oakdale now) and wrote to the children in the East, and a Post-Card to Dr. Priestly, who had invited me to ride with him in his new automobile, respectfully declining his invitation. (T.S.R. 38. 2 P.M. 68. S.S. 60.)

Apr. 16. Easter Sabbath. And the birthday of my Luther, which used to be the double birthday. Luther is now 55 yrs. old, quite grey, bald and deaf, but still very active and doing what he can for the town in his usual public-spirited way. He's in the only meat market in town, but times are hard in the meat-business, cattle and hogs being high and scarce. He has not yet found the spiritual rest I long for him to find. Locust trees are not in bloom yet, which shows how backward our Spring is this year. But the flower decorations in the Church today were beautiful. The S.S. pupils from across the river sent a bushel of wild poppies gathered there, the largest and rankest we ever saw. Some stems were from 18 inches to two ft. in length, and very stout, and the blooms wonderfully large and highly colored. Then there were over 50 calla lilies, but no roses as yet. The attendance was large at the services - no extra program except music. Each S.S. pupil received an Easter egg and Post-Cards. The Post-Cards are very beautiful this year. Rev. Kidder dined with us. (T.S.R. 39. 2 P.M. 69. S.S. 64.)

Apr. 17. Mond. Received letter from Theresa, Post-Card from the Robinsons and the photo of Frank and Maude Locke's baby Susan - a bright and pretty child, and wrote to Eureka. Rev. Robinson is now pastor of a church in Williamston, Michigan. (T.S.R. 44. 2 P.M. 72. S.S. 66.)

Apr. 19. Wednes. North wind blew very severely all day. Celeste is now 15 yrs. old, and very large for his age, weighing 143 lbs. measuring 5 ft. 9 1/2 inches, as large as a man, and in some ways is improving. He seems more studious and interested in learning and can be a real help when he tries, but is still a great care to Hannah. Have written to Theresa and Post-Cards to Maude Locke and the Robinsons. Myrtle came in this P.M. (T.S.R. 45. 2 P.M. 58. S.S. 56.)

Apr. 20. Thurs. Received letter from Ada and Will Cooke. He has resigned the pastorate at Oakley, because the work has so increased at Black Diamond that his whole time is needed there. At Easter

1911. services at Black Diamond, there were 90 percent in S. School and 200 at preaching services, which numbers exceed ours at present. Myrtle came and brought the finished photos of the four generations. Stephen, Lottie, Howard and myself. They are rather disappointing. (T.S.R. 35. 2 P.M. 66. S.S. 59.)

Apr. 21. Fri. Received letter from Eunice and sent our photo group of four generations to the boys in the East. Chester arrived home today to stay awhile, as he has disposed of his mining property in Lumpkin, it having failed to prove a success. He is in excellent health and not discouraged, which is the principal thing. (T.S.R. 41. 2 P.M. 64. S.S. 53.)

Apr. 22. Satur. Our Dist. School had a picnic at Tretheway's Grove today, voted a success, with no bad accidents. Clements school baseball team was also there. Carpenter Smith has been taking down our old grape arbors, in front on each side of the piazza. They had grown so rotten that they must either be removed or braced up more, and as most of the graperies were dead, there seemed to be no justification in keeping them up longer. Received letter from Rev. Wallace and wrote to the children East. (T.S.R. 38. 2 P.M. 66. S.S. 60.)

Apr. 24. Mond. Lou is 48 years old and a dear, good wife, mother and daughter she is - may her years be many and happy ones. She is now to have help in her kitchen permanently, we hope, as an elderly woman, Mrs. Hutton, has come to live with them. Lou deserves the best things in this world, for she is very self- sacrificing for others. Have written to Portland, to Calvin and to Webster Parker. Myrtle came to say goodbye, as she returns to her work in San Francisco. (T.S.R. 42. 2 P.M. 66. S.S. 56.)