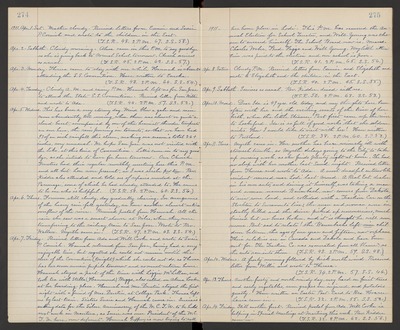 Apr. 5. Wednes. This has been a very stormy day. Wind blew a gale and rain came abundantly till evening, when there was almost or quite a cloud-burst, accompanied by one of the heaviest thunder tempests we ever have, the rain pouring in torrents, so that we have had .93 of an inch rainfall this storm, making our season's total 26+ inches, very unusual. We hope San Jose was not visited with the like, at this time of Convention. Lottie came in to say goodbye, as she intends to leave for home tomorrow. Our Church Trustees had their regular monthly meeting here this P.M. and all but Lou were present, so I was scribe pro tem. Rev. Kidder also attended and told us of repairs needed at the Parsonage, some of which he had already attended to. He seems to be one who is helpful. (T.S.R. 50. 2 P.M. 60. S.S. 56.)

Apr. 6. Thurs. Forenoon still cloudy, day gradually clearing. In consequence of the heavy rain fall yesterday, we have another almost entire overflow of the river. Received postal from Hannah. All the rain she saw was a smart shower at Niles, when they were transferring to the railway train to San Jose. Wrote to Rev. Wallace. Myrtle came in. (T.S.R. 47. 2 P.M. 63. S.S. 54.)

Apr. 7. Friday. Received letter from Ada and Will Cooke and wrote to Susie P. Cornish. Hannah returned from San Jose, having had a very enjoyable time, but regretted she could not remain until the close of the Convention (tonight) which she could not do, as Theresa has her seven music pupils tomorrow and so must return home. Hannah stayed a part of the time with Lizzie McLellan, and took tea with Stella (Hammond) Baggs, also called on Alma Locke at her boarding-place. Hannah and Mrs. Dustin stayed the first night with a friend of Mrs. Dustin, at College Park. Theresa left us by last train. Sisters Susie and Hannah came in. Susie is seeking data for the Silver Anniversary of the W.C.T.U. to be held next week in Manteca, as Susie was once President of the W.C.T.U. here, now defunct. Hannah Geffroy is now trying to sell

1911. her home place in Lodi. This P.M. has occurred the Annual Election for School Trustee, and Will. Young was chosen to succeed himself. The School Board now is, Messrs. Charles Weber, Fred. Figge and Will Young. Very little attention was paid to the election and our school is poor. (T.S.R. 41. 2 P.M. 65. S.S. 56.)

Apr. 10. Mond. Dear Ida is 49 yrs. old today and my thoughts have been often with her and the exciting events of the time of her birth, when the little Steamer Pert first came up the river to Lockeford. Ida is so full "of good works" that she seldom writes. How I would like to visit with her! Have written to Portland. (T.S.R. 38. 2 P.M. 60. S.S. 52.)

Apr. 11. Tues. Myrtle came in. Her mother has been seriously ill with stomach trouble, so Myrtle delays going to the City to take up nursing work, as she finds plenty sight at home. She had no sleep with her mother last Sund. night. Received letter from Theresa and wrote to Ada. A most dreadful automobile accident occurred near Lodi last Mond. A Real Est. dealer in his own auto, and driving it himself, was taking a man and woman named Baumbach, new-comers from Dakota, to view some land, and collided with a Traction Car on the Stockton to Sacramento line; the man and woman were instantly killed and the driver picked up unconscious, much bruised but no bones broker, and it is thought he will soon recover. But sad to relate! the Baumbachs left nine children between the ages of one year and fifteen, now orphans. Their relatives are in Canada and Dakota and have been sent for. The Traction Co. was exonerated from all blame, as the auto ran into them. (T.S.R. 43. 2 P.M. 59. S.S. 48.)