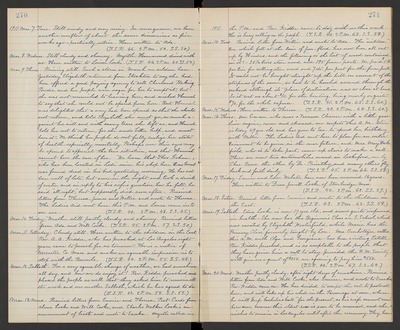 Mar. 9. Thurs. Raining still. Such a storm in March we seldom have. Yesterday Elizabeth returned from Stockton to say she had been offered a good paying agency to sell Cleveland Baking Powder, and her people were eager for her to accept it, but she was not reconciled to leaving here, and wished Hannah to say that she could not be spared from here. But Hannah was delighted that a way had been opened so that she should not return, and told Elizabeth she must go, so much against her will and with many tears she left us, and Hannah told her not to return, for she needs better help, and must have it, We think her people do not fully realize her state of health, especially mentally. Perhaps now their eyes may be opened to appreciate the true situation, and that Hannah cannot have the care of her. We learn that Thos. Gehan, who has been located in Lodi since his shop here was burnt was found dead in his bed yesterday morning. He has not been well of late, but arose in the night and took a drink of water, and in reply to his wife's question how he felt, he said "all right", but supposedly died soon after. Received letters from Theresa, James and Willie and wrote to Theresa. The Ladies Aid met here this P.M. and Laura came into see me. (T.S.R. 44. 2 P.M. 48. S.S. 45.)

Mar. 12. Sabbath. For a very agreeable change of weather, we had sunshine all day, and how we do enjoy it! Rev. Kidder preached and pleased the people so well that they asked him to remain all the week and over another Sabbath, which he has agreed to do. (T.S.R. 42. 2 P.M. 58. S.S. 55.)

Mar. 13. Mond. Received letters from Eunice and Theresa, Post-Cards from Alma Locke and Will Cooke, and Charles Walker Locke's announcement of birth and wrote to Eureka. Myrtle called in

Mar. 14. Tues. Received letter from Willie and wrote to Ada. The "witness" tree which fell at the time of Jan. flood has now been all cut up by Hindus, and the following is the list of wood contained in it: - 38 1/2 tiers stove wood and 195 fence posts. We paid $1 1/4. per tier for cutting stove wood and 7 cts. per post for the fence posts. It could not be brought straight up the hill on account of the steepness of the same, so had to be hauled around through the orchard although its place of destination was so close at hand. So it cost us about $10. for the hauling, being nearly or quite $70, for the whole expense. (T.S.R. 41. 2 P.M. 65. S.S. 60.)

Mar. 16. Thurs. Mr. Cowan, who runs a Vacuum Cleaner with a little gasoline engine, came and cleaned our carpets this A.M. Alice - is today 49 yrs. old and has gone to Sac. to spend her birthday with Nellie. The Ladies Aid met here to plan for an entertainment to be given in the near future, and Mrs. May Wakefield, who is to take part, came up stairs to make a call. There are now two automobiles owned in Lockeford, one by Chas. Bacon, the other by Dr. Priestley, and many others fly back and forth daily. (T.S.R. 45. 2 P.M. 66. S.S. 58.)

Mar. 19. Sabbath. Edna Locke is now 17 yrs. old, and seems quite improved in health. She now has the Beginner's Class in S. School, which was vacated by Elizabeth Westerfield, while Marie has the Primary Class, formerly taught by Lou. Mrs. Overholtzer called this A.M. with Olga and Georgiana - has been visiting Estelle. Rev. Kidder preached, and is so acceptable to the people that they have given him a call to stay, provided the H.M. Society. will give us a grant of $250. We agreeing to pay him $550. (T.S.R. 44. 2 P.M. 67. S.S. 62.)

Mar. 20. Mond. Weather partly cloudy, after eight days of sunshine. Received - letters from Ada and Will Cooke, also Eunice, and wrote to Eureka. Rev. Kidder came in. He has decided to accept the call to pastorate here, and will take up his abode in the Parsonage at once, where he will keep "bachelor's hall" for the present, as his wife cannot come here now, because their eldest son is soon to be married, and she wishes to remain in Los Angeles until after the ceremony. They have