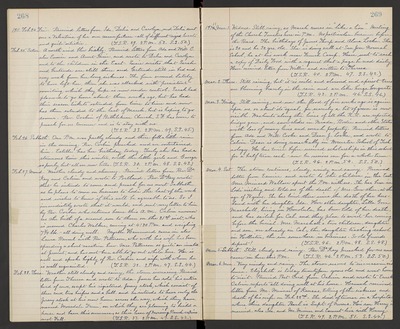 Feb. 25. Satur. A north wind blew briskly. Received letters from Ada and Will C. also Eunice and Aunt Susie, and wrote to Delia and Carolyn and to the children in the East. Susie writes that Sarah and Gertrude are still there and Gertrude still in bed and very weak from her long sickness. the fever seemed lately to have left her, then she was attacked with persistent vomiting, which they hope is now under control. Sarah had planned to go home about three weeks ago, but has had their season tickets extended from time to time and now has them extended to the last of March, but is hoping to go sooner. Rev. Corbin of Bethlehem Church, S.F. has come to preach for us tomorrow and is to stay with us. (T.S.R. 33. 2 P.M. 49. S.S. 45.)

Feb. 26. Sabbath. Our P.M. was partly cloudy and there fell a little rain in the evening. Rev. Corbin preached and we entertained him. Estelle has her birthday today. Truly she has had a strenuous time this winter, with the little girls and George so poorly, but all are now better. (T.S.R. 30. 2 P.M. 48. S.S. 43.)

Feb. 27. Mond. Weather cloudy and showery. Received letters from Rev. DeKay and Calvin and wrote to Portland. Rev. DeKay wrote that he intends to come and preach for us next Sabbath as he plans to come on business to Lodi, the last of the week and wishes to know if this will be agreeable to us. So I immediately wrote that it would, and sent my letter to him by Rev. Corbin who returns home this A.M. Calvin announces the birth of a second son to them on the 21st inst, who is named Charles Walker, coming at 4:30 P.M. and weighing 7 3/4 lbs. - all doing well. Myrtle Hammond came in also Laura Bruml with Rev. Patterson, who with his wife has been spending a short vacation here. Mrs. Patterson is quite an invalid at present, and has not been able to go out while here. He is well and speaks highly of Rev. Corbin and wife, with whom he is well acquainted. (T.S.R. 32. 2 P.M. 47. S.S. 44.)

Feb. 28. Tues. Weather sill cloudy and rainy, the storm increasing. Received letter from Theresa and wrote to Ada. James has sold his entire herd of cows, except his registered Jersey stock, which consist of three cows, two heifers and a bull, and he intends to have only the Jersey stock at his new home across the way, which they have named "Mossdale Farm", on which they are planning to build a house and barn this summer, as their lease of Moreing Ranch expires next Fall. (T.S.R. 37. 2 P.M. 47. S. 42.)

1911. Mar. 1. Wednes. Still rainy, so March comes in "like a lion". Meeting of the Church Trustees here in P.M. No particular business before the Board. The birthdays of James Thorp and Alma Locke. She is 20 and he 32 yrs. old. She is doing well at San Jose Normal School, he at his work near French Camp. Have sent to each a copy of "Daily Food" with a request that a page be read daily. Have received letter from Willie and written to Theresa. (T.S.R. 40. 2 P.M. 47. S.S. 42.)

Mar. 3. Friday. Still raining, and now the flood of five weeks ago is again upon us, or about its equal, for scarcely a bit of green is now. visible. Washouts along the lines of all the R.R. are reported, bridges gone, and snowslides in Nevada, Bodie and other States with loss of many lives and much property. Received letters from Ada and Will Cooke and Dean J. Locke, and wrote to. Calvin. Dean is doing remarkably in Worcester School of Technology. He has twice before received scholarships in the school for a half term each - now he receives one for a whole term. (T.S.R. 46. 2 P.M. 54. S.S. 50.)

Mar. 4. Sat. The storm continues, cloudy, windy and rainy. Received letter from Eunice and wrote to the children in the East. Mrs. Minard Wallace spent the P.M. with us. She has been in Lodi visiting and told us of the death of Mrs. Gove there, at the age of 78 years. She has lived there since the death of her husband with the daughter Ida. Her other daughter, Lilla Gove Marshall, living in Honolulu, has been told of her death, and has sailed for Cal. and they plan to await her coming before the burial. Mrs. Marshall's two children, daughter and son, are already in Cal., the daughter teaching school in Hollister, the son somewhere in business. So old friends depart! (T.S.R. 46. 2 P.M. 48. S.S. 48.)

Mar. 6. Very windy and rainy. The storm seems to increase in violence. Elizabeth is today twenty four years old and went home to visit. Received Post-Card from Calvin and wrote to Eureka Calvin reports all doing well at his home. Hannah received letter from Mr. Minner of Kansas, Telling of the sickness and death of his wife on Feb. 22nd. She died of tumor in a hospital where their daughter Pearl is Supt. of Nurses. His son Harry is married, also Ida, and Mr. Minner and Earnest live with Harry. (T.S.R. 49. 2 P.M. 51. S.S. 44.)