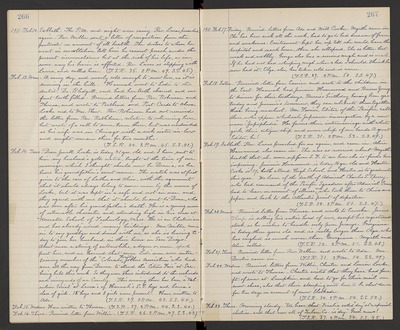 1911. Feb. 12. Sabbath. The P.M. and night were rainy. Rev. Lucas preached again. Rev. Miller sent a letter of resignation from the pastorate on account of ill health. The doctors to whom he went in consultation tell him he cannot preach under the present circumstances but at the risk of his life, as in some way his brain is affected. Rev. Lucas is stopping with Laura, and called here. (T.S.R. 35. 2 P.M. 49. S.S. 45.)

Feb. 13. Mon. A rainy day, and nearly cold enough to snow here, as it is snowing in the hills. Hannah went to Lodi to the dentist, Dr. Blodgett, and had her teeth cleaned and one front tooth filled. Received letters from Rev. Robinson and Theresa, and wrote to Portland and Post-Cards to Alma Locke and to Mrs. Shaw. Rev. Robinson had not received the letter from Rev. Rathbone, relative to returning here but wrote of a call to some town there, but was undecided as his wife was in Chicago with a sick sister-in-law and might remain there for two months. (T.S.R. 44. 2 P.M. 45. S.S. 42.)

Feb. 14. Tues. Dean Jewett Locke is today 21 yrs. old and I have sent to him my husband's gold watch, bought at the time of our marriage, which I thought should now be Dean's, as he bears his grandfather's exact name. The watch was at first given to the care of Luther and Alice, with the agreement that it should always belong to some man by the name of Locke, but it was kept in a safe and not in use, and they agreed with me that it should be sent to Dean, who was born after his grandfather's death. He is a young man of estimable character and standing high in his class at Worcester School of Technology, Mass. He is an Electrician and has already "wired" many buildings. Mrs. Miller came in to say goodbye and dined with us, as she is leaving today to join her husband in their home in San Diego. About noon a string of automobiles, a dozen or more, sped past here, and we learned that some Lodi men were entertaining members of the "Colorado Fruit Jobbers Association" who had come all the way from Denver to attend the "Citrus Fair" at Sac. being held this week. So they were thus introduced to the orchards and vineyards of our County. This evening there has been a "Valentine Social" at Laura's of Hannah's S.S. boys and Laura's class of girls. 15 boys and 8 girls were present. Have written to Ada. (T.S.R. 29. 2 P.M. 43. S.S. 40.)

1911. Feb. 17. Friday. Received letters from Ada and Will Cooke. Myrtle came in. She has been sick all the week, had to go to bed because of fever and weakness. Excitement kept her up till she could leave the hospital and reach home, then she collapsed. She is better but weak and wobbly. George also has a serious cough and is weak. If he had not had whooping cough when a lad I should think he now had it. Olga, also, has taken cold and is worse. (T.S.R. 29. 2 P.M. 50. S.S. 47.)

Feb. 18. Satur. Received letter from Eunice and wrote to the children in the East. Hannah had Jimmie Hammond and Burres Young to dinner for their birthdays, Burres's birthday having been yesterday and Jimmie's tomorrow, they can celebrate them together there being no school. Mr. Ferrier, Editor of the Pacific, call those who oppose wholesale Japanese immigration by a new name - "Japophodes". He favors their intermarriage with white girls, their citizen-ship and owner-ship of our lands. A great Editor, he! (T.S.R. 31. 2 P.M. 52. S.S. 49.)

Feb. 19. Sabbath. Rev. Lucas preached for us again, and came in. Alice Hammond also came in. She was so worried about Myrtle's health that she came up from S.F. to see how she is - finds her improving. Jimmie Hammond is today 16 yrs. old and Hester Cooke is 17, both attend High School, and Hester is to graduate this year. We learn of the death of Admiral Charles S. Sperry, who had command of the Pacific Squadron after Admiral Evans had to leave on account of illness, and who took them to China and Japan and back to the Atlantic point of departure. (T.S.R. 32. 2 P.M. 51. S.S. 47.)

Feb. 20. Mond. Received letter from Theresa and wrote to Eureka. James Thorp is selling his entire herd of cows, except his registered stock, as he wishes to handle only pure Jerseys. Georgiana is today three years old and is really larger than Olga, who has coughed so much worse than Georgiana. Myrtle and Alice called. (T.S.R. 32. 2 P.M. 51. S.S. 48.)

Feb. 22. Wednes. Received letters from Willie, Chester and Louise Locke and wrote to Theresa. Chester writes that they have had four ft. of snow at Lumpkin, and had to go for their mail on snow-shoes, also that their stamping mill had to be shut-down for ten days on account of snow blockade. (T.S.R. 34. 2 P.M. 54. S.S. 52.)