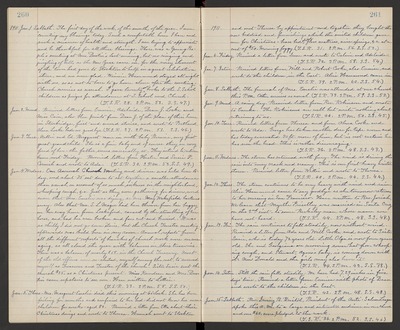 1911. Jan. 1. Sabbath. The first day of the week, of the month, of the year. I am "counting my blessings" today. Such a comfortable home I have and such a measure of health and strength. I am trying to appreciate and be thankful for all these blessing. There was a Young People's meeting at Mrs. Dustin's last evening, but no ringing and jingling of bells as the New Year came in, for the noisy element of the town had gone to Stockton to help in a great celebration there, and we were glad. Winnie Hammond stayed all night with us, so as not to have to go home alone after the meeting. Church services as usual. I gave twenty one books to the S. School children as prizes for attendance at S. School and Church. (T.S.R. 28. 2 P.M. 52. S.S. 47.)

Jan. 3. Tues. Nellie and Ed. Bergquest came in with baby Bernice, my first great-grandchild. She is a fine baby and of course they are very fond of her - the father seems unusually so. They intend to return home next Friday. Received letters from Hester and Susie P. Cornish and wrote to Ada. (T.S.R. 30. 2 P.M. 52. S.S. 49.)

Jan. 4. Wednes. Our Annual Church Meeting and dinner was held here today, and about 35 sat down to eat together, a smaller attendance than usual, on account of so much sickness in the neighborhood, whooping cough, &.c. Just as they were gathering for dinner, word came that Mrs. Emslie was dying, so Mrs. May Wakefield hastened away. Also that Mrs. S. L. Magee had been thrown from her buggy on her way home from Lockeford, caused by the stumbling of her horse, and had her arm broken and face cut and bruised. It was so chilly I did not go down stairs, but the Church Trustee meeting afterwards was held here in my room. Annual reports from all the different reports of branches of church work were encouraging, as all closed the year with balances in their treasuries. There was a balance of nearly $58. in the Church Treasury. Most of the old officers were re-elected, myself among the rest, to succeed myself as Treasurer and Trustee of the church. Sister Susie sent the church $25. as a Christmas present. Miss Knudsen and Mrs. Dustin came upstairs to see me. Have written to Lottie. (T.S.R. 33. 2 P.M. 58. S.S. 50.)

Jan. 5. Thurs. Mrs. Margaret Emslie died this morning at 6 o'clock. She has been failing for months and confined to her bed - did not know her own children for weeks - aged 82. Received a letter from Etta about their Christmas doings and wrote to Theresa. Hannah went to Stockton

Jan. 12. Thurs. The storm continues to be very heavy with wind and rain. Alice Hammond came to say goodbye as she tomorrow returns to her nursing in San Francisco. Have written to Bro. Josiah. We learn that Myrtle Priestley was married in Santa Cruz on the 2nd inst. to some Berkeley man whose name we have not heard. (T.S.R. 44. 2 P.M. 48. S.S. 48.)

Jan. 13. Fri. The rain continues to fall steadily, now without wind. Received a letter from Ada and Will Cooke and wrote to Sister Susie, who is today 72 years old. Little Olga is now four years old. She and Georgiana are recovering somewhat from whooping cough, and Stewart, Agnes's baby, is coming down with it. Now Donald and the girls may also have it. (T.S.R. 44. 2 P.M. 42. S.S. 38.)