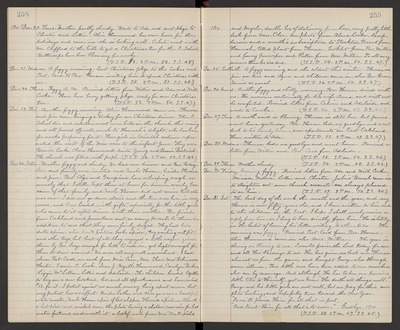 1910. Dec. 20. Tues. Weather partly cloudy. Wrote to Ada and sent pkgs. to Chester and Lottie. Alice Hammond has come home for the holidays and came in - she is looking well. Celeste went with Mr. Clifford to the hills to get a Christmas tree for the S. School. Buttercups have been blooming for weeks. (T.S.R 42. 2 P.M. 52. S.S. 48.)

Dec. 23. Fri. Another foggy morning. Alice Hammond came in. Theresa and Jim came, bringing a turkey for our Christmas dinner. The S. School tree and entertainment were held in the church this evening and all passed off well, much to Hannah's delight, who has been for weeks preparing for it. Four girls in Oriental costume represented the visit of the Wise-men to the infant Jesus. They were Bernice Locke, Clara Hammond, Anita Young and Bernice Dietrich. The church was filled with people. (T.S.R. 34. 2 P.M. 52. S.S. 48.)

Dec. 24. Satur. Weather foggy and cloudy. We had our dinner and tree today. Geo, and family were invited and Uncle Horace, besides Theresa and Jim. But Olga and Georgiana have whooping cough so severely that Estelle kept them at home for dinner, soonly Geo. came of that family, and Uncle Horace did not arrive till all was over. I did not go down stairs and the tree was here in my room, and O so loaded with gifts, especially for the little girls who came to it after dinner with their mother. For friends from Oakland and Jamestown sent so many presents to them in addition to ours that they were fairly dazed. They had two dolls apiece, also 3 or 4 picture books apiece, toy washing outfit, and other toys, but best of all they enjoyed a little wagon given them by Geo. large enough for both to ride in, yet light enough for them to draw around. We were all very well remembered. I had eleven Post-Cards, one each from Miss Cain, Mrs. Shaw, Mrs. Robinson Hester, Eunice C. Locke, Dean J. Myrtle Hammond, Carolyn Parker Lizzie McLellan, Lottie and Adelaide. The children banded together to buy me a new bedstead, bed, and all appurtenances and have raised $50. for it. I protest against so much money being spent on me, but my protest has no effect. Besides Luther and Alice gave me a beautiful white sweater, Uncle Horace a pair of bed slippers, Theresa a picture, Alice H. a hot plate and nickel cover, the plate having a shallow reservoir for hot water fastened underneath it, a hdkf. each from Mrs. Westerfield

1910. and Myrle, double box of stationery from Lou, very pretty little book from Mrs. Ober, her photo from Alma Locke, lamp burner and a month's subscription to Stockton Record from Hannah, Potted plant from Theresa, booklet from Rev. Miller and fancy penwiper and blotter from Mrs. Miller To all my sincere thanks are due. (T.S.R. 34. 2 P.M. 50. S.S. 47.)

Dec. 26. Mond. Another foggy and chilly morning. Bro. Horace dined with us. He mournes continually for his wife Anna and will not be comforted. Received letters from Calvin and Adelaide and wrote to Eureka. (T.S.R. 26. 2 P.M. 49. S.S. 46.)

Dec. 31. Sat. The last day of the week, the month and the year, and my Horace is now fifty years old, and I have written to him and to the children in the East. I hope I shall surely receives a reply from him, as I long to hear directly from him. He is lately in the habit of leaving his letter writing to others to do. The morning was foggy. Received Post-Card from Bro. Horace - Alice Hammond came in also Mrs. Miller. The year is closing in blessing to us. I would praise the Lord today for one and all His blessings to us. He has given us back our Theresa almost as from the grave, and brought George also through severe illness. Two little ones have been added to our numbers, also one by marriage. And although He has taken our precious little Otis to Himself, yet we know "He doeth all things well". George and his little girls are not well, but we pray for their complete healing, and hopefully turn toward the New Year. "So we'll praise Him for all that is past, "And trust Him for all that's to come". Goodbye, 1910. (T.S.R. 33. 2 P.M. 47. S.S. 45.)