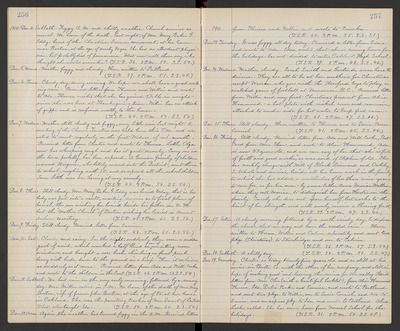 1910. Dec. 4. Sabbath. Foggy A.M. and chilly weather. Church services as usual. We learn of the death, last night, of Mrs. Mary Baker G. Eddy, head of the Christian Science movement, at her home near Boston, at the age of nearly 90 yrs. She had no attendant physician, but probably died of pneumonia. What now will those say who thought she would never die? (T.S.R. 36. 2 P.M. 52. S.S. 52.)

Dec. 6. Cloudy day, rainy evening. We hope we shall have a good waking rain. Received letters from Theresa and Willie and wrote to Ada. Theresa writes that she has gained 2 1/2 lbs. in weight since she was here at Thanksgiving time. Willie has an attack of grippe and is confined mostly to the house. (T.S.R. 44. 2 P.M. 52. S.S. 50.)

Dec. 7. Wednes. Weather still cloudy and foggy, very little rain last night. A meeting of the Church Trustees was held here this P.M. and we voted to meet regularly on the first Wednes. of each month. Received letter from Chester and wrote to Theresa. Little Olga now has whooping cough and has it quite severely. Every one in the town, probably, has been exposed. A German family of children named Wiegum, who lately moved into the District, sent them to school, coughing with it, and so exposed all the school children. Some little ones are having it very severely. (T.S.R. 44. 2 P.M. 54. S.S. 54.)

Dec. 8. Thurs. Still cloudy. Mrs. Mary Baker G. Eddy was buried today, that is, her body was put into a vault, awaiting decision as to final place of burial, the son wishing her burial beside his father in N. H. but the "Mother Church" of Boston wishing her buried in Mount Auburn cemetery. (T.S.R. 45. 2 P.M. 61. S.S. 56.)

Dec. 10. Sat. Cloudy and rainy. In the night, suddenly there came a sudden gust of wind, which wrecked a half blind on one of our sitting-room windows, and brought a rose-bush, climbing on front porch, heavy with buds, down to the ground in a heap. Then it subsided as suddenly as it came. Received letters from Ada and Will Cooke and wrote to the children in the East. (T.S.R. 48. 2 P.M. 56. S.S. 54.)

Dec. 12. Mon. Again the weather has turned foggy in the A.M. Received letters

Dec. 14. Wednes. Weather cloudy. Sarah Smith and Gertrude were here to dinner. They are all to be at her mother's for Christmas except Warren, who goes with, the Stanford boys to play a matched game of football at Vancouver, B.C. Received letter from Willie and my first Christmas present from Alice Hammond - a hot plate with nickel cover and reservoir attached to under side for hot water to keep food warm. (T.S.R. 41. 2 P.M. 47. S.S. 44.)

Dec. 16. Friday. Still cloudy. Received letter from Ada and Will Cooke, Post- Card from Mrs. Shaw, and wrote to Alice Hammond. Ada is now 53 years old, and we can say of her that she "is full of faith and good works", as was said of Stephen of old. She has weekly charge with Will of Black Diamond and Oakley S. Schools and services, besides all her home work in the family to which she has added a motherless of less than nine years, to care for, as for her own - by name Esther Anna Marian Wallen whom they call Marian, to distinguish her from Hester in the family. Surely she does not spare herself, but works to the limit of her strength, and will surely receive a blessing for it. (T.S.R. 39. 2 P.M. 47. S.S. 44.)

Dec. 17. Satur. A cloudy morning followed by a north windy day, to disperse the clouds, that we may not have the needed rain. Have written to Horace, Willie and Calvin separately and sent two pkgs. (Christmas) to Sturbridge and one to Calvin. (T.S.R. 36. 2 P.M. 57. S.S. 54.)

Dec. 19. Monday. Chester is today twenty five years old and is still at his mine in Butte Co. with the others of his company, and still in hope of "making good" and leaving the mines for the valley. Rec'd letters from Mrs. Ober (with a beautiful booklet), from Alice Hammond Theresa, Ida, Delia Parker and Eunice, and wrote to Portland and sent two pkgs. to Willie, one to Susie Cornish, and two to Eunice, and an express pkg. to Ida, and wrote to Portland. Alma Locke called. She has come home from Normal School for the holidays. (T.S.R. 31. 2 P.M. 50. S.S. 49.)