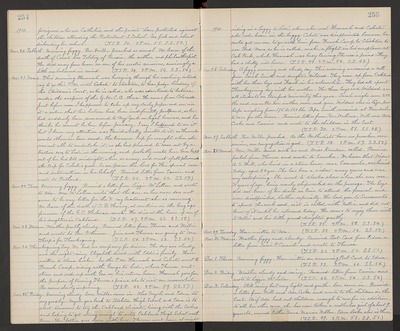 1910. foreigners who are Catholics, and the priests have protested against the children attending the Protestant S. School. Ida feels sad about disbanding her school. (T.S.R. 34. 2 P.M. 55. S.S. 50.)

Nov. 20. Sabbath. Morning foggy. Miller preached as usual. We learn of the death of Count Leo Tolstoy of Russia, the author and philanthropist. He died away from home on one of his erratic missions, seemingly a little unbalanced in mind. (T.S.R. 34. 2 P.M. 56. S.S. 54.)

Nov. 21. Mond. This morning Hannah was hurrying through her washing, intending to go this P.M. with Celeste to Stockton, to hear Judge Lindsay of the Children's Court, as he is called, who was advertised to lecture under the auspices of the Y.M.C.A. there. He comes from Colorado. Just before noon I happened to take up my daily paper and saw in it a notice that his lecture had been indefinitely postponed, as he had suddenly been summoned to New York on legal business, and he thinks he cannot be here before January. I say I happened to see it but I know my attention was Providentially directed to it, as Hannah would otherwise have made the tiresome trip for naught, when she was not able to undertake it, as she had planned to come out by a traction car to Lodi in the evening, and probably would have been kept out of her bed till midnight, when so weary, and most of all planned the trip for Celeste's good. So we praise the Lord for His special care and intervention on her behalf. Received letter from Eunice and wrote to Portland. (T.S.R. 42. 2 P.M. 62. S.S. 59.)

Nov. 22. Tues. Morning foggy. Received a letter Lizzie McLellan and wrote to Ada. Mrs. McLellan writes that the sore on her nose does not seem to be any better for the X-ray treatment she is receiving. We learn of the death of O.B. Harvey, at one time in the long ago foreman of the G.C. Holman ranch. He died at the home of one of his daughters in Oakland. (T.S.R. 47. 2 P.M. 63. S.S. 58.)

Nov. 24. Thanksgiving Day. We had no company for dinner. The day was cloudy and the night rainy. Elizabeth dined with Eddie's family. Have written to Alma Locke. In the P.M. Hannah and Celeste went to French Camp, riding with George to Lodi, where Theresa met them and rode up with Geo. on his return home. Hannah goes for the purpose of tuning Theresa's piano, she to visit me meanwhile. She seems slowly improving. (T.S.R. 48. 2 P.M. 59. S.S. 57.)

Nov. 25. Morning cloudy. Mrs. Miller came in. Also Myrle and Edna to say goodbye. Myrle goes back to Stockton High School and Edna is to start tomorrow to try the Oakland climate, living with the Cookes and hoping to get strong enough to enter Oakland High School next term. Her father goes down with her. Theresa went home at night

1910. riding in a buggy to Lodi, where she met Hannah and Celeste who rode home in the buggy - Celeste was disappointed because he could get no one to go with him from French Camp to Stockton to see Bud Mars, as he is called, make a flight in his aeroplane at Oak Park, while Hannah was busy tuning Theresa's piano. They had a chilly ride home. (T.S.R. 43. 2 P.M. 54. S.S. 48.)

Nov. 26. Saturday. A foggy morning and cloudy day. This morning we received a call from Sarah Smith and daughter Mildred. They came up from Oakland with her three boys and Frank in his automobile. They had all spent Thanksgiving day with her mother. The three boys and Mildred are all students in Stanford University this year. Sarah weighs some 200 lbs, and resembles her mother more each year. Mildred also is large, perhaps weighing from 175 to 180 lbs. Papa Smith remained at Ferndale to care for the home. Received letters from Rev. Wallace, Will and Ada Cooke and Eunice and wrote to the children in the East. (T.S.R. 30. 2 P.M. 51. S.S. 48.)

Nov. 28. Mond. Mrs. Miller dined with us and Miss Knudsen called. Received postal from Theresa and wrote to Eureka. We learn that Widow A.E. Hill, who lived in a stone house near Camanche, was buried today, aged 84 yrs. She has been a widow many years and was very enterprising. She went to Alaska alone when she was over 70 years of age, being nearly shipwrecked on the passage. The boys did not know of her death in time to attend the funeral, and were disappointed, Luther especially. He had gone to Sacramento to spend the week-end, as it is called, with Nellie, and did not know of it until he returned today. He seems to enjoy these visits to Nellie and his little grand-daughter greatly. (T.S.R. 35. 2 P.M. 58. S.S. 54.)

Dec. 3. Saturday. Still rainy but very light and gentle. Lou came in. Received a letter from Will and Ada Cooke and wrote to the children in the East. As if Ada had not children enough to care for in addition to all her other cares, she has now taken a motherless girl of about 9 years old, named Esther Anna Marian Wellen. Edna Locke also is there. (T.S.R. 47. 2 P.M. 52. S.S. 51.)