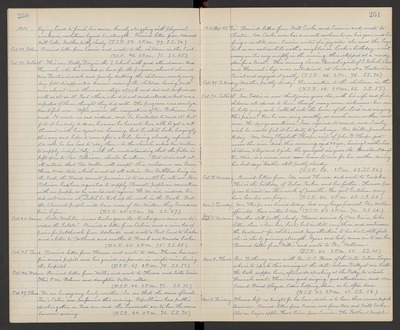 Oct. 23. Sabbath. This was Rally Day in the S. School with good attendance. And Hannah, who has worked so hard for the program, almost alone, as Mrs. Dustin is weak and poorly, drilling the children nearly every day, felt disappointed because some of the children having parts were absent and others were stage-struck and did not perform so well as at drill. But others, who did not understand what was expected of them, thought they did well. The program was surely a beautiful one. After service, the resignation of Rev. Robinson was read. It made us sad indeed, and he hesitated to send it, but felt it his duty to do so, because he has not been able to get a settlement with his Agent in Lansing, but he still looks longingly this way and hopes to come after a while, having already refused two calls he has had to stay there. So the church asked Rev. Miller to supply indefinitely, with the understanding that the field is left open to Rev. Robinson, should he return. But it is not at all certain that Rev. Miller will accept this, unless we can have Home Miss. Aid, which is not at all certain. Rev. Rathbone being in the East, the Board cannot promise it to us until he returns. Rev. Robinson had been requested to supply Clements people in connection with our people, so he would not require H.M. Aid, indeed he did not receive it only until he took up the work in the Bank. But the Clements people will have none of Rev. Miller - they have seen him before. (T.S.R. 45. 2 P.M. 74. S.S. 67.)

Oct. 24. Mond. Locke Webster is now twelve years old - twelve years since we divided the Estate! Received a letter from Calvin and a nice box of prices for patchwork from Adelaide and wrote a Post-Card to Locke and a letter to Portland and another to Frank and Maude Locke. (T.S.R. 46. 2 P.M. 75. S.S. 68.)

Oct. 27. Thurs. We are having very lovely weather. In our Hall the drama of "Uncle Tom's Cabin" was performed this evening. Republicans had public speaking there on Tues. eve, and the Democrats are to have the same tomorrow evening. (T.S.R. 44. 2 P.M. 76. S.S. 70.)

1910. Oct. 28. Fri. Received letters from Will Cooke and Eunice and wrote to Chester. Mr. Cooke now has a small carbuncle on his jaw, and his finger is still sore. Eunice writes of a "joy ride" she and the boys took in an automobile with a neighbor on Locke's birthday - went many miles very swiftly in the evening, then stopped at a candy store for a treat. This evening Laura Bruml's girls of S. School class and Hannah's boys were entertained at Laura's at a Hallowe'en Social and enjoyed it greatly. (T.S.R. 46. 2 P.M. 78. S.S. 70.)

Oct. 30. Sabbath. Son Eddie is now thirtynine years old, with his wife and five children all spared to him, through many severe sicknesses - how can he help going each Sabbath into "the house of the Lord" and singing His praises? For he can sing sweetly, so much more so than most men. He does go sometimes, I am rejoiced to record, and I only wish he would feel it his duty to go always. Rev. Miller preached today. Mrs. Mary Elizabeth Thorpe, wife of John B. Thorpe, just across the river, died this morning, aged 44 yrs., leaving 8 motherless children, 6 boys and 2 girls, the youngest six years old. Her eldest daughter, Alice, is a nurse, and come home to care for her mother, during her last days. Weather still partly cloudy. (T.S.R. 50. 2 P.M. 63. S.S. 56.)

Oct. 31. Monday. Received letters from Ida and Theresa and wrote to Eureka. This is the birthday of Delia Parker and her father. Theresa proposes to visit us this week if possible. Her girl Gretchen may leave her - has sore finger. (T.S.R. 40. 2 P.M. 65. S.S. 60.)

Nov. 2. Wednes. Weather still partly cloudy. Theresa arrived by P.M. train, looks better than when here last, but is still very thin, and continues the treatment for colitis, and pays attention to her diet, still feels she is slowly gaining strength. Agnes and baby came in to see her. Received letter from Willie and wrote to Rev. Wallace. (T.S.R. 43. 2 P.M. 65. S.S. 60.)

Nov. 3. Thurs. Geo. Tretheway came with Rev. A.C. Bane, of the Anti-Saloon League who is to speak this evening at the Anti-Saloon Rally at our hall. He took supper here, afterwards speaking at the Rally, to which Hannah went. There was good singing, good attendance, and our Cornet Band played, Eddie helping them, as he often does. (T.S.R. 43. 2 P.M. 61. S.S. 58.)

Nov. 4. Friday. Theresa left us tonight for her home, as she is to have three music pupils tomorrow. Received letters from Eunice and from Ada and Will Cooke. Also an Oregon apple, Hood River, from Eunice. The Portland people