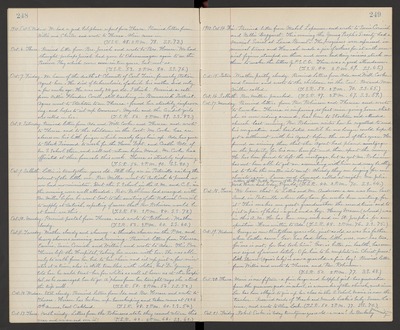 Oct. 7. Friday. We learn of the death at Clements of Carl Trier, formerly Station Agent here. He died of tuberculosis, of which his mother died only a few weeks ago. He was only 24 yrs. old. I think. Received a call from Nellie Flanders Corell, still teaching in Brunswick District. Agnes went to Stockton to see Theresa - found her steadily improving, and hopes to sit up tomorrow. Myrle and the Condict girls also called on her. (T.S.R. 56. 2 P.M. 89. S.S. 82.)

Oct. 8. Saturday. Received letters from Ada and Will Cooke and Theresa and wrote to Theresa and to the children in the East. Mr. Cooke has an abscess on his little finger which nearly lays him up. Ada has gone to Black Diamond to work for the Home Dept. and Cradle Roll of her S. School there, and will not return before Mond. Mr. Cooke has officiated at three funerals this week. Theresa is steadily improving. (T.S.R. 56. 2 P.M. 90. S.S. 80.)

Oct. 9. Sabbath. Lottie is twentythree years old. Still they are in Porterville waiting the advent of the little one. Rev. Miller went to Antioch to preach so we had no minister. But the S. School in the A.M. and C.E. in the evening were well attended. Rev. Rathbone had arranged with Rev. Miller before he went East to the meeting of the National Council to supply at Antioch, expecting of course that Rev. Robinson would be at home ere this. (T.S.R. 54. 2 P.M. 84. S.S. 78.)

Oct. 11. Tuesday. Weather cloudy and showery - a thunder shower in the P.M. and heavy showers morning and evening. Received letters from Theresa, Eunice, Susie Cornish and Willie, and wrote to Ada. This P.M. Theresa left the Hospital, taking her nurse with her. She was able only to walk from her bed to her chair and sit up just a few minutes at a time, also is still troubled with colitis, but Dr. Young told her he could treat her for colitis as well at home as the hospital, so he encouraged her to go. A 'phone from her tonight says she stood the trip well. (T.S.R. 50. 2 P.M. 56. S.S. 52.)

1910. Oct. 14. Fri. Received letter from Mabel Lopeman and wrote to Susie Cornish and Nellie Bergquest. This evening the Young People's Society had a Musical Social at Laura Bruml's. The programs were expressed in musical terms and Hannah made a jar of cookies for it with musical figures stamped on them and some had tiny raisins stuck on them to make the letters Y.P.S.C.E. There was a good attendance. (T.S.R. 44. 2 P.M. 69. S.S. 65.)

Oct. 17. Monday. Received letters from Rev. Robinson and Theresa and wrote to Eureka. Theresa is improving so fast since going home that she is now riding around, has been to Stockton and attended church last evening. Rev. Robinson writes how he regretted to send his resignation and hesitated until he no longer could hope to get a settlement with his Agent before the end of this year. He found on arriving there that the Agent had placed mortgage on the property for his own benefit and then spent the money. He has been forced to lift the mortgage, but as yet Mr. Robinson has not been able to get an accounting with him and may be obliged to take the matter into court. Already they are longing for our climate again. Laura and Leonard called at night. Mrs. Julia Ward Howe died today, 91 yrs. old - Author of the "Battle Hymn of the Republic." (T.S.R. 44. 2 P.M. 70. S.S. 64.)

Oct. 18. Tues. We learn that to Lottie and Mr. Anderson a son was born last Sund. in Porterville where they have for weeks been waiting for it. This makes me great-grandmother the second time and to just a pair of babies - a girl and a boy. Henry Mason (colored) was in this A.M. He has been very sick and in St. Joseph's for an operation. Have written to Ada. (T.S.R. 48. 2 P.M. 76. S.S. 75.)

Oct. 19. Wednes. George is now thirtythree years old, just as old as was his father when Luther came. Geo. has had three little ones, now has two, for "one is not, for God took him." Geo. is better in health, has seen no signs of worms lately. O for him to be complete in Christ Jesus! Little Stewart (Agnes's baby) is now a year old - a fine boy! Received letter from Willie and wrote to Theresa and Rev. Robinson. (T.S.R. 50. 2 P.M. 77. S.S. 68.)

Oct. 20. Thurs. Marie is now fifteen - a fine, large and helpful girl - has graduated from the grammer grade in school, is a member of the church, and since Lou has been obliged to give up her class in the S. School, Marie is now the teacher. Received cards of Frank and Maude Locke's baby. Susan Lucena, and wrote to Alma Locke. (T.S.R. 50. 2 P.M. 77. S.S. 70.)