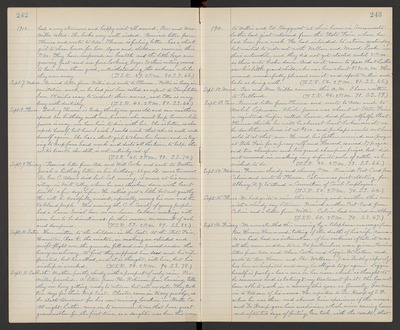 1910. had a very strenuous and happy visit all around. Rev. and Mrs. Miller called. She looks very well indeed. Received letter from Theresa and wrote to Ada. Theresa is feeling better - has a stout girl to clean house for her. Agnes and children came in this P.M. They have improved in health and the little boys are growing fast and are fine looking boys. So their outing seems to have done them good, notwithstanding the sickness while they were away. (T.S.R. 47. 2 P.M. 80. S.S. 66.)

Sept. 7. Wednes. Received letter from Willie and wrote to Theresa. Willie is busy in sanitation work, as he had just been called as expert to Templeton Inn, 55 miles away, to inspect their sewers, and Etta is very busy with dentistry. (T.S.R. 42. 2 P.M. 80. S.S. 66.)

Sept. 8. Thurs. Darling Theresa is today thirtyone years old and can neither spend her birthday with me, because she must keep house while James is away, nor have him to dine with her. She is better, so she reports herself, but how I wish I could write that she is well and herself again. She has a stout girl to clean her house, and is trying to keep from hard work and diets all the time, to help the colitis trouble she still is not entirely rid of. (T.S.R. 45. 2 P.M. 88. S.S. 74.)

Sept. 9. Friday. Received letter from Ada and Will Cooke and wrote to Brother Josiah a birthday letter, as his birthday - 66 yrs. old - comes tomorrows Dr. Geo. C. Adams died last Sat. evening, it seems, at his summer cottage in Mill Valley, where he was stricken down with heart trouble a few days before. He rallied just a little but not greatly. He will be dreadfully missed, especially among his own and the Oakland people. This evening the C. E. Society of young people had a Lawn Social here on our lawn. Outdoor meetings will soon have to be discontinued for this season on account of cool and dampness. (T.S.R. 53. 2 P.M. 89. S.S. 82.)

Sept. 10. Satur. Have written to the children in the East. At the State Fair, Hamilton, Chas. K. the aviator, in making an extended and swift flight over the grounds, fell and was pinned under the heavy machinery. At first they supposed him died and his wife fainted, but he rallied, and it is thought, will live, but his airship is wrecked. (T.S.R. 54. 2 P.M. 92. S.S. 78.)

Sept. 11. Sabbath. Weather partly cloudy with a prospect of early rain. Rev. Miller preached. A letter from Rev. Robinson from Lansing, tells they are busy getting ready to return but sets no date. They took ten days for their trip East. Chester came in to say goodbye, as he starts tomorrow for his new mining location in Butte Co. At night, Luther came in to announce to me that I was great- grandmother for the first time, as a daughter was born this morn

1910. to Nellie and Ed. Bergquest at their home in Sacramento. Luther had just returned from the State Fair, where he had been for a week. He had intended to return yesterday but waited to ride out with Wallace and Maud Locke in their automobile, and they did not get started until 3. P.M. as their auto broke down. And so it came to pass that Luther saw his little grandchild, who was born about 8:30 A.M. He seemed wonderfully pleased over it and reports Nellie and babe as doing well. (T.S.R. 56. 2 P.M. 81. S.S. 65.)

Sept. 13. Tues. Received letter from Theresa and wrote to Ada and to Mabel Lopeman. While James was absent at State Fair a registered heifer, called Leona, died from alfalfa bloat. Theresa thinks he will be almost heart-broken over it, as he doubtless valued it at $200. and perhaps would not have sold it at that sum. He and his father received one prize at State Fair for a Jersey calf and Howard received 17 prizes and two champion and two grand champion prizes, but did not succeed in making any definite sales of cattle, as he wished to do. (T.S.R. 42. 2 P.M. 73. S.S. 66.)

Sept. 16. Friday. We were startled this morning by a telephone message from Bro. Horace Hammond, telling of the death of his wife Anna. As we had had no intimation of her sickness of late, it was all the more sudden to us. No particulars were given. Received letters from Ada and Alma Cooke and Lizzie McLellan and wrote to Bro. Horace and Rev. Wallace. Josie Dudley is poorly - has been in hospital and may be obliged to go again. Lizzie herself is poorly - has a sore on her nose which is thought to be cancerous and is taking X-ray treatment for it. She has not been able to work in a cannery this year as formerly. Geo. came in to tell me of his worms. He reported to Dr. Knorp of S. F. when he was there and showed him specimens of the worms, and Dr. Knorp gave him medicine, which, since coming home and after two days of fasting, Geo. took, with the result, that