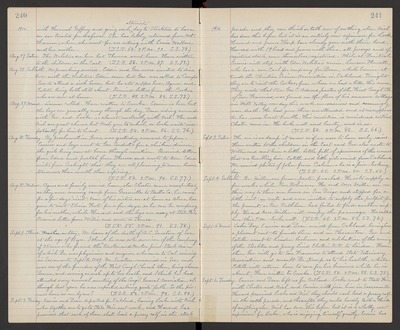 1910. with Hannah Geffroy and going each alternate day to Stockton to have an ear treated for deafness. She has lately returned from Mt. Hermon, where she went for an outing with Lucia Wallace and her mother. (T.S.R. 54. 2 P.M. 92. S.S. 78.)

Aug. 28. Sabbath. No preaching services. Eddie and Geo. were invited to dine here with the Websters. Eddie came but Geo. was called to Campo Seco to attend a sick horse, but he ate supper here, Agnes and Estelle being both still absent. Received letters from the Cookes who are now at home. (T.S.R. 48. 2 P.M. 82. S.S. 73.)

Aug. 29. Mond. Laura called. Have written to Eureka. Eunice is here but the boys are generally away through the day, Dean riding around with Geo. and Locke is almost constantly with Niel. He and Niel are great chums, but Niel goes to school, so Locke waits impatiently for him to be out. (T.S.R. 54. 2 P.M. 86. S.S. 76.)

Aug. 30. Tuesday. By proclamation Korea was yesterday annexed to Japan. Eunice and boys went to Geo. Condict's for a chicken dinner the girls being now at home through vacation. Received letter from Edna and postal from Theresa and wrote to Ada. Edna writes from Seabright that they are all planning to come home tomorrow, their month then expiring. (T.S.R. 54. 2 P.M. 94. S.S. 77.)

Aug. 31. Wednes. Agnes and family arrived home, also Chester came unexpectedly as they were moving camp from Greenville to Butte Co. he came for a few days visit. None of his sisters are at home as Alma has gone to visit Elvira Foote for a few days, so he can be company for his mother, while Howard and the boys are away at State Fair. Received letter from Willie and wrote to Theresa. (T.S.R. 55. 2 P.M. 91. S.S. 78.)

Sep. 1. Thurs. Weather sultry. We learn of the death of A.C. Sweetser of Sac. at the age of 91 yrs. I think he was sole survivor of the Company of 25 men who formed the "Boston and Newton Joint Stock Ass'n" of which Dr. was physician and surgeon, who came to Cal. arriving in Sacramento, Sept. 16. 1849. Mr. Sweetser remained in Sac. and was one of the founders of the First Cong'l Church there, being chosen Deacon, and serving as such up to his death, and I think he had attended evening annual meeting of the Cong'l General Association although last year he was reported as being quite feeble. So the pioneers leave us one by one! (T.S.R. 52. 2 P.M. 92. S.S. 82.)

Sept. 2. Friday. Eunice and Dean departed for Oakland, leaving Locke with Niel, who together are to go to State Fair next week, and Howard has promised that each of them shall lead a Jersey calf in the stock

1910. parade and they can think or talk now of nothing else. Niel has done this before but it is an entirely new experience for Locke. Howard and James Thorp have already gone with their herd, Howard with 19 head and James with three, all Jerseys and of registered stock, some themselves registered. While at Fruitvale Eunice will stop with Edw. Webster's cousin, Lawson Howatt, who has a son Earl for company for Dean, while Eunice attends the Christian Science Association in Oakland. Tonight they are to visit the Cookes, from whom we had a letter this morn. They write that Rev. Geo. C. Adams, pastor of the First Cong'l Ch. of San Francisco, was found on the floor of his summer cottage in Mill Valley one day this week, unconscious and seemingly near death. He had gone there unattended and it is supposed he has some heart trouble. His condition is considered critical. Chester came in. He looks well and hearty, and is so. (T.S.R. 54. 2 P.M. 86. S.S. 66.)

Sept. 3. Satur. The air is so damp it seems as if we were to have early rains. Have written to the children in the East and Geo. also wrote to Willie and sent him a little bottle full of specimens of the worms that are troubling him. Estelle and little girls arrived from Oakland. We received photos of John from Calvin - he is a fine-looking boy. (T.S.R. 48. 2 P.M. 80. S.S. 68.)

Sept. 4. Sabbath. Rev. Miller, our former pastor preached. He is to supply a few weeks while Rev. Robinson. He and Mrs. Miller are on their way to their own home in San Diego, and stopped for a little visit en route and were invited to supply the pulpit for the present, as Rev. Rathbone had failed to find another supply. He and Mr. Miller will occupy the parsonage. He called here this P.M. - looks well. (T.S.R. 48. 2 P.M. 83. S.S. 74.)

Sept. 5. Mond. Labor day. Eunice and Dean arrived from Oakland, having had a pleasant visit to friends there and in Pleasanton. Geo. and Estelle went to Linden barbecue and celebration of the coming of the Stockton and Jenny Lind Electric R.R. to Linden. From there Geo. will go to San Francisco to attend State Veterinary Association and consult Dr. Knorp as to his health, while Estelle will return here to care for his business while he is absent. Have written to Eureka. (T.S.R. 50. 2 P.M. 88. S.S. 73.)

Sept. 6. Tuesday. Eunice and Dean left us for Portland. Locke went to State Fair with Chester and Niel, and Eunice will join him in Sacramento. Howard promised Locke and Niel they should each lead a Jersey calf in the cattle parade, and thereafter they could hardly talk or think of anything else. Niel has done this before but it is a wholly new experience for Locke, who is enjoying himself greatly. Eunice has