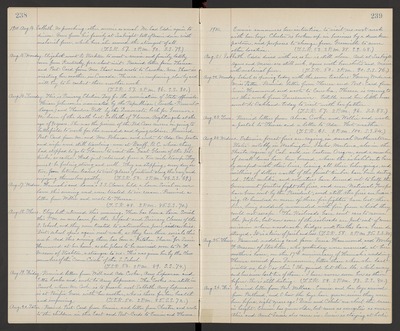 Aug. 15. Monday. Elizabeth went to Stockton to meet a cousin and family lately come from Kentucky for a short visit. Received letter from Theresa and Post-Card from Mrs. Shaw and wrote to Eureka. Mrs. Shaw is visiting her mother in Canada. Theresa is improving slowly and will try to be content there another week. (T.S.R. 57. 2 P.M. 96. S.S. 80.)

Aug. 16. Tuesday. This is Primary Election Day for the nomination of State officials. Hiram Johnson is nominated by the Republican (Lincoln-Roosevelt League) and Theodore Bell by the Democrats, both for Governor. We learn of the death last Sabbath of Florence Nightingale at the age of 90 years. She was the pioneer of the Red Cross nurses in going to battlefields to work for the wounded and dying soldiers. Received Post-Card from Mr. and Mrs. Robinson and wrote to Ada. Our pastor and wife were still traveling - were at Banff, B.C. where they had stopped to go to Glocier to visit the "Great Glacier of the Selkirks", so called. Had just returned from a ten mile tramp. They must be feeling strong and well. They are stopping, every day or two, from between trains, to visit places of interest along the way and enjoying themselves greatly. (T.S.R. 52. 2 P.M. 86. S.S. 69.)

Aug. 18. Thurs. Elizabeth returned this morning. There has been a Lawn Social this P.M. on our lawn for the Infant and Primary Classes of the S. School, and they were treated to watermelons, pears, and cookies. Dist. school opens again next week, so they have these socials this week. And this evening there has been a "Kitchen Shower" for Susie Hammond at her home, as she plans to be married soon to W. F. Mason of Stockton, a stranger to us. This was given her by the Class members of the "Crown Circle" of the S. School. (T.S.R. 52. 2 P.M. 89. S.S. 74.)

Aug. 19. Friday. Received letters from Will and Ada Cooke, Amy Lopeman and Etta Locke and wrote to Amy Lopeman. The Cookes are still in Sunol, where Mr. Cooke is to preach next Sabbath. Amy Lopeman is at Pacific Grove with her mother, who is there for her health and improving. (T.S.R. 50. 2 P.M. 85. S.S. 72.)

Aug. 20. Satur. Received Post-Card from Eunice and letter from Chester and wrote to the children in the East and Post-Cards to Eunice and Theresa.

1910. Eunice announces her intention to visit us next week with her boys. Chester is broken up in business by a drunken partner, and proposes to change from Greenville to some other location. (T.S.R. 52. 2 P.M. 88. S.S. 68.)

Aug. 22. Monday. School is opening today with the same teachers. Henry Wade and Miss Pattee. Received letter from Theresa and Post-Card from Susie Hammond and wrote to Eureka. Theresa is coming to us this week from Dunsmuir. Estelle and her little ones went to Oakland today to visit with her father. (T.S.R. 57. 2 P.M. 96. S.S. 83.)

Aug. 24. Wednes. Extensive forest fires are raging in several Northwestern States - notably in Washington, Idaho, Montana, also in the Shasta region of Cal. and in Eastern Oregon, and a number of small towns have been burned, where the inhabitants barely escaped with their lives, losing all their belongings, and millions of dollars worth of the finest timber have been destroyed. State militia, and volunteers have turned out to help the Government foresters fight the fires, and even National Troops have been sent by the President, and still the fires are burning. A hundred or more of these firefighters have lost their lives, being suddenly surrounded with fire from which they could not escape. The Railroads have sent cars to rescue the people, but now some of the railroads are put out of commission where woodwork, bridges and trestles have been destroyed. It is a time of peril and loss. (T.S.R. 58. 2 P.M. 95. S.S. 80.)

Aug. 25. Thurs. Received wedding card from Susie Hammond and Worley F. Mason of Stockton, who yesterday were married at her mother's home, on the 17th anniversary of Hannah's wedding. Theresa arrived from Dunsmuir, better than when she last visited us, but O so thin! She gained but three lbs, while away and has since lost two of them. I have never seen her so thin before. She is still dieting. (T.S.R. 58. 2 P.M. 93. S.S. 80.)

Aug. 26. Fri. Received letter from Rev. Wallace. Eunice and her boys arrived from Portland, and O how the boys have grown since they were here before, eight years ago! Dean and Celeste are about the same in height. Eunice has grown older, but seems as energetic as ever. Alice and Aunt Susie also came in. Susie is staying at Lodi