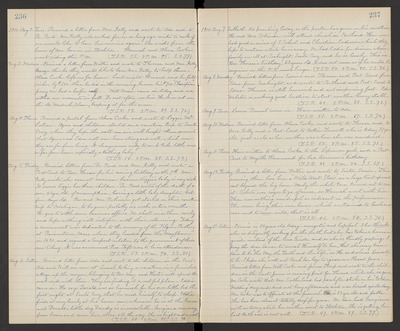 Aug. 3. Wednes. Received a letter from Willie and wrote to Theresa and Mrs. Kelly George thinks they would like to have Mrs. Kelly to help them. Alma Cooke left us for home. Last night Howard said he felt richer by $500. than he did in the morning, because his $700. "Champion" Jersey cow had a heifer calf. Will Moore came in today and we settled our accounts in full. Do not often see him. He lives out on the old Wardrobe place, keeping it for the owner. (T.S.R. 53. 2 P.M. 89. S.S. 72.)

Aug. 4. Thurs. Received a postal from Alma Cooke and wrote to Lizzie McLellan. Agnes and children started on a vacation trip to Santa Cruz, where they hope the salt sea air will benefit them so much that Agnes and Edna will come home strong and well, which now they are far from being. It always seems risky to me to take little ones so far from home, especially a teething baby. (T.S.R. 50. 2 P.M. 88. S.S. 73.)

Aug. 5. Friday. Received letters from Dr. Pond and Mrs. Kelly and wrote a Post-Card to Bro. Horace for his coming birthday on the 7th. Mrs. Kelly writes she cannot come now because Lizzie's baby is very sick. It seems Lizzie has three children. Dr. Pond writes of the death of a son, 41 yrs. old, of consumption, leaving a little baby daughter, but five days old. Rev. and Mrs. Robinson got started on their vacation trip to Michigan, to be gone probably six weeks or two months. He goes to settle some business affairs. We shall miss them sorely and hope nothing will interfere with their returning. Today a monument was dedicated to the memory of the Pilgrim Fathers at Provincetown, Mass. where they landed from the "Mayflower" in 1620, and signed a Compact relative to the government of their new Colony. It was announced Pres. Taft was to be in attendance. (T.S.R. 53. 2 P.M. 94. S.S. 81.)

Aug. 6. Satur. Received letter from Ada and wrote to the children in the East. Ada and Will are now at Sunol, taking a vacation, in a furnished cottage up the canyon, belonging to Rev. May, and Hester will spend the week-ends with them. They are finding it a restful place. Eddie came in. He says Donald was so homesick for his own little bed the first night at Santa Cruz that he cried himself to sleep. Eddie finds it very lonely at his house now, whenever he is at the house and Donald's little dog Dandy is inconsolable. Georgiana ran away from home and came here alone all the way. She is bright and smart. (T.S.R. 60. 2 P.M. 95. S.S. 78.)

1910. Aug. 7. Sabbath. No preaching today as the pastor has gone on his vacation. He and Mrs. Robinson will attend church in Portland. Here we had good sessions of S. School and Christian Endeavor, which they hope to sustain while he is away. We had Eddie for dinner, whose family are all at Seabright, Santa Cruz, and he is lonely. This is Bro. Horace's birthday, 63 years old. It does not seem as if he could be engineer on the R.R. much longer. (T.S.R. 50. 2 P.M. 90. S.S. 76.)

Aug. 8. Monday. Received letters from Eunice and Theresa Post-Card from Edna from Seabright, and wrote to Portland and Post-Card to Edna. Theresa is still homesick and not improving fast. Edw. Webster is seeking good location to start another livery stable. (T.S.R. 48. 2 P.M. 88. S.S. 71.)

Aug. 12. Friday. Received a letter from Willie and wrote to Sister Susie. This evening there has been a "Wild West Show" in a large tent spread out beyond the big barn. Nearly the whole town turned out to see it. Celeste was eager to go, of course, so Hannah went with him. There was nothing wonderful or indecent in the performance. The men bring their own horses, which are trained to buck and rear and to seem wild, that is all. (T.S.R. 46. 2 P.M. 84. S.S. 70.)

Aug. 13. Satur. Eunice is 36 years old today - energetic and hopeful. She thinks she is diligently seeking for the truth, but she has taken a human guide instead of the true Guide, and so she is blindly groping. I pray the dear Savior to reveal Himself to her, that she may know him to be "the Way, the Truth and the Life," as He so declares himself to be. I hope she will not teach her boys to ignore our blessed Jesus. Received letters from Will Cooke and James Thorp and wrote to the children in the East. James is canning fruit for Theresa while she is gone Mr. Cooke writes that Mrs. Sutherland had paralytic stroke on her "Golden Wedding" day, and died not long afterwards and was buried yesterday. Mr. Cooke was to officiate at the funeral. She is 83 yrs. old and feeble. She has been almost totally deaf for years. We have had Georgiana with us today while her mother went to Stockton. She is getting her last teeth and is not well. (T.S.R. 47. 2 P.M. 89. S.S. 77.)