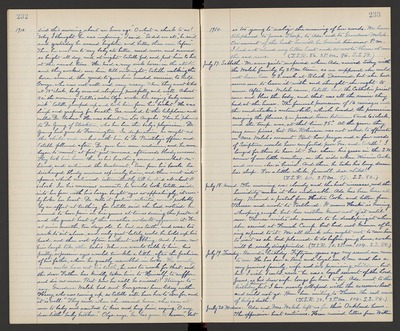 1910. died this morning, about an hour ago." O what a shock to us! "Why I thought he was improving", I said. "So did we all", he said and yesterday he seemed brighter and better than ever before". Then he went on to say baby ate better, cooed more and seemed so bright all day, and at night - Estelle feed and put him to bed at the usual time. He had a very sick horse in the stable and they worked over him till midnight, Estelle walking the horse around the yard to give him needed exercise, to help George, who was not well and very weary. When they went to bed at 12 o'clock, baby seemed sleeping peacefully and well. About 4 in the morning, Estelle's sister Olga awoke her saying "baby seems sick." Estelle jumped up and took him from his basket. He was limp and gasping for breath. Geo. rushed to the telephone and called Dr. Barbour. He was absent in Los Angeles. Then he phoned to Dr. Young of Stockton, who has been the baby's physician. Dr. Young had gone to Farmington. In desperation he caught up the child and rushed with him to Dr. Priestley's office and Estelle followed after. Dr. gave him some medicine, and he soon began to vomit, at first just mucous, afterwards bloody mucous. They took him home then, as his breathing seemed somewhat relieved, and continued the treatment. Soon from his bowels he discharged bloody mucous copiously twice, and then went into spasms, which continued intermittently till he died at about 11 o'clock. In his conscious moments, he would look, Estelle said, into her face with his large bright eyes so appealingly it nearly broke her heart. Dr. calls it gastric-enteritis, caused probably by an effort at teething, for Estelle said she has noticed he seemed to have pain in his gums at times during the past week and the great heat of the weather no doubt aggraved it. For at nine months, ten days old, he had no teeth, and was too weak to sit alone, and only just lately could he hold up his head, and then not often without wobbling. And I never saw him laugh like other babies. When we would talk to him, his pretty, expression eyes would twinkle a little, after the fashion of his father, whom he greatly resembled in looks. He surely never could have cut his teeth, he was to weak for that, and the dear Father has kindly taken him to Himself, to suffer and die no more. But how he will be missed! Strange to say, Grandma Walsh had sent Georgiana home today with Harry, who was coming up, so Estelle will have her to care for and "it is well." They said when she arrived home she ran at once to baby and wanted to kiss and hug him, saying, "O my dear little baby brother." Olga says, "he has gone to heaven," but

July 17. Sabbath. We were quite surprised when Ada arrived today with the Walsh family by 2 P.M. train, as we supposed she could not leave her S.S. work at Black Diamond, but she had some one to leave it with and thought she ought to come. After Mrs. Walsh came, Estelle had the Catholic priest come and bless the body, and that was all the service they had at the house. The funeral procession of 16 carriages and the undertaker-s automobile, which headed the procession carrying the flowers, &.c. passed here between 5 and 6 o'clock, and the temp. was, at that time 95-. At the grave they sang some pieces, but Rev. Robinson was not asked to officiate on Mrs. Walsh's account. But how prayer and a few words of Scripture would have comforted poor Geo. and Estelle! I longed for them to have it. Geo. chose his grave in the S.W. corner of our little cemetery, on the side where Winnie Cooke and no one else is buried. And there he takes his long, dream less sleep. For a little while, farewell, dear child! (T.S.R. 60. 2 P.M. 97. S.S. 82.)

July 18. Mond. The morning was cloudy and the heat increases, and the humidity makes it less endurable. Ada has been here all day. Received a postal from Hester Cooke and letter from Theresa and wrote to Portland. It seems Hester is having whooping cough, but her mother knew not of it until now, Theresa writes she seemed to be developing it when she arrived at French Camp, but had not known of being exposed to it. We all think she ought not to come here to visit as she had planned to do before going home, so she will be sorely disappointed. (T.S.R. 70. 2 P.M. 104. S.S. 88.)

July 19. Tuesday. Howard's birthday. Fiftyone years ago my second son came to me. He has been a true and loyal son to me and has a very precious family, wife and six promising children, but how I wish I could write he was a loyal servant of the Lord Jesus, as his dear wife longs for him to be. Ada went to the birthday dinner but I have nearly collapsed with the excessive heat and could not go. Have been writing to Theresa the sad news of baby's death. (T.S.R. 72. 2 P.M. 104. S.S. 84.)

July 20. Wednes. Ada and Mrs. Walsh left us for this Oakland homes. The oppressive heat continues. Have received letters from Willie