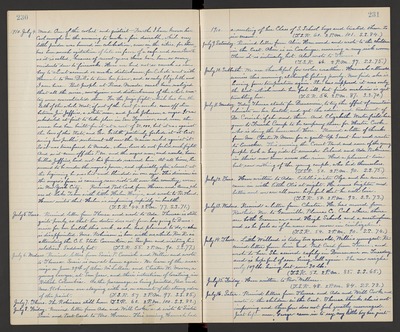 1910. July 4. Mond. Once of the coolest and quitest - Fourths I have known here Cool enough in the morning to make a fire desirable, while very little powder was burned in celebration, even in the cities, for there has been much agitation of late in favor of a "safe and sane Fourth" as it is called, because of recent years there have been so many accidents due to fireworks. Here we had not so much as one boy to shout around or make disturbance, for Celeste went with Hannah to Mrs. Dill's to tune her piano, and so only Elizabeth and I were here. But people at Reno, Nevada, must have realized that all the noise, [?] and disturbances of the whole country were concentrated there. For the prize fight, which has been the talk of the whole West, if not of the East for weeks, came off there between Jim Joffries, a white man, and Jack Johnson, a negro. It was scheduled at first to take place in San Francisco, and even the arena has been built for it at a cost of $30,000, but it was against the laws of this State, and Geo. Gillett positively forbade it at last, seeing now public sentiment all over the Union ruled against it. So it was transferred to Nevada, whose laws do not forbid such fights. And so it came off this P.M. and the negro won, and would have killed Jeffries, has not his friends rescued him. At all times, he seemed to be under the negro's power, and especially after, almost at the beginning he was hit and blinded in one eye. This decision in the negro's favor is causing race riots all over the country, even in New York City. Received Post Card from Horace and Anna, who are at Lake Tahoe with little Helen Harjis, and wrote to Portland. Horace writes that Helen is improving rapidly in health. (T.S.R. 44. 2 P.M. 77. S.S. 71.)

July 5. Tues. Received letter from Theresa and wrote to Ada. Theresa is still quite poorly, so that her doctor does not favor her going to Dunsmuir for her health this week, as she had planned to do, so she is disappointed. Mrs. Robinson is here with us, while Rev. R. is attending the C.E. State Convention in San Jose and visiting his relatives. Suddenly hot. (T.S.R. 55. 2 P.M. 90. S.S. 77.)

July 6. Wednes. Received letters from Susie P. Cornish and Willie and wrote to Theresa. Susie is now at home again. We learn of the marriage on June 29th of Alice McLellan and Chester W. Moore, a young lawyer, at San Jose, and their intention of locating in British Columbia. As the parsonage is being painted, Rev. and Mrs. Robinson are staying with us, on account of the strong odor of the paint. (T.S.R. 57. 2 P.M. 97. S.S. 85.)

July 8. Friday. Received letter from Ada and Will Cooke and wrote to Sister Susie and Post Card to Bro. Horace. This evening Hannah had

July 10. Sabbath. We are thankful for cooler weather. Hannah attended services this mornings, although feeling poorly. Now finds she is having fever temperature again. She has supposed it was only he heat which made her feel ill, but finds malaria is yet troubling her. (T.S.R. 56. 2 P.M. 87. S.S. 70.)

July 11. Monday. Today Theresa starts for Dunsmuir, to try the effect of mountain climate on her health, and get the advice and treatment of Dr. Cornish, if she needs them. And Elizabeth Westerfield has gone to French Camp to be campany these for Hester Cooke who is doing the houseworks there. Received a letter of thanks from Mrs. Chester W. Moore for a quilt top I sent her and wrote to Eureka. This evening the Cornet Band and some of the young people took a hay ride to serenade Leland and Ada Parkinson in their new home across the river. Had a pleasant time but saw nothing of the young couple, who hid themselves. (T.S.R. 50. 2 P.M. 90. S.S. 75.)

July 13. Wednes. Received a letter from Chester. He has moved from Rawhide, Nev. to Greenville, Plumas Co. Cal. where there are both Grammar and High Schools and a meetinghouse and so he feels as if he were once more in civilization. (T.S.R. 54. 2 P.M. 90. S.S. 74.)

July 14. Thurs. Little Willard is today two years old, Willie's youngest. Received letter from him and Post Card from Theresa, and wrote to her. She arrived safely in Dunsmuir on Tuesday and is hopeful of soon being well again. She now weighs only 109 lbs. having lost some 30 lbs. (T.S.R. 52. 2 P.M. 85. S.S. 65.)

July 16. Satur. Received letters from Theresa and Ada and Will Cooke and wrote to the children in the East. Theresa thinks she is not improving and these for does not feel greatly encouraged. Just before noon, George came in to say, "my little boy has just