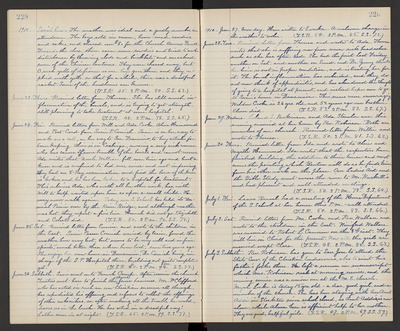 1910. Social here. The weather was ideal and a goodly number in attendance. The boys sold ice cream, home-made candies and cakes, and cleared over $8. for the Church Annex Fund. Towards the close, there came some rowdies and tried to make disturbance by throwing clods and brickbats, and smashed some of the Chinese Lanterns. They were chased away, but O such yells of defiance as our boys gave them and they replied with yells so that for a while, there was a dreadful racket. Some of the hoodlums are known. (T.S.R. 45. 2 P.M. 80. S.S. 63.)

June 23. Thurs. Received letters from Theresa. She has still much inflammation of the bowels, and is trying to get strength, still planning to take treatment at some hospital. (T.S.R. 48. 2 P.M. 78. S.S. 65.)

June 24. Fri. Received letters from Will and Ada Cooke, Alice Hammond and Post Card from Susie P. Cornish. Susie is on her way to make us a call, on her way to San Francisco, to buy articles for house keeping. Alice is in Coalinga, nursing a very sick woman who has cancer or same trouble of the bowels and cannot recover. Ada writes that Uncle William fell some time ago and hurt a knee and is confined to bed ever since and not improving they had an X-Ray examination and find the bone of the knee is broken and he has been taken to a hospital for treatment. This relieves Ada, who with all her other week, has, with Will to help, waited upon him as upon a small child. He may never walk again. Today our S. School has held its Annual Picnic over by the River Bridge, and although weather was hot, they report a fine time. Hannah did not go, Elizabeth and Celeste did. (T.S.R. 50. 2 P.M. 92. S.S. 78.)

June 25. Sat. Received letter from Eunice and wrote to the children in the East. Susie Pascoe Cornish arrived by train, found the weather here very hot, but seems to be very well and in fine spirits, much better than when here last, some two years ago. She enjoys her new home in Dunsmuir, Dr. Cornish being in charge of the S.P. Hospital there, building not quite completed yet. (T.S.R. 60. 2 P.M. 100. S.S. 83.)

June 26. Sabbath. Susie went on to French Camp. After service the church Trustees met here to finish the church fence business. Mr. Clifford who has acted in such an un-Christian manner all through, has repudiated his offering, and refuses to collect the offerings of other subscribers, so, after making all the trouble he could, leaves us in the lunch. He has acted in a dreadful way! Luther came in at night. (T.S.R. 65. 2 P.M. 99. S.S. 77.)

June 28. Tues. Received letter from Theresa and wrote to Ada. Theresa writes that she is suffering now from severe sick headaches such as she has often had. She had the first last Friday another on Sat. and another on Sund. and Dr. Young thinks her liver is not in proper condition, and is treating her for it. The bowel inflammation has subsided, and they do not now think of appendicitis, and has abandoned the thought of going to a hospital at present, and instead hopes soon to go to Susie's home in Dunsmuir. This seems more encouraging Weldon Cooke is 26 yrs. old, and 52 years ago our brother Elmer died. (T.S.R. 53. 2 P.M. 83. S.S. 67.)

June 30. Thurs. Received letter from Ida and wrote to Alice and Myrtle Hammond. Ida writes that the carpenters have finished building the addition to their house, and next comes the painting which Benton will do as he finds times from his other work on the place. Our Ladies Aid and the Bible Study went across the river to Mr. Burkett's and had pleasant and well-attended meetings. (T.S.R. 50. 2 P.M. 78. S.S. 64.)

July 2. Sat. Received letters from Mr. Cooke and Rev. Wallace and wrote to the children in the East. Winifred Wallace was married to Robert L. Cameron on the 8th inst. They will live in Chico for the present. Now all the girls are married except Clara. (T.S.R. 48. 2 P.M. 82. S.S. 63.)

July 3. Sabbath. Rev. Robinson has gone to San Jose to attend the State Conv. of the Christian Endeavourers, also to visit his father's folks there. He left a sermon in manuscript which Mrs. Robinson read at morning service, and the evening service was a union one at the M.E. church. Myrtle Locke is today 15 yrs. old - a dear, good girl, and a number of the church. She has been staying with her Aunt Addie in Stockton since school closed, as Aunt Addie is now alone, which Alma here is efficient help to her mother. They are good, helpful girls. (T.S.R. 47. 2 P.M. 69. S.S. 59.)