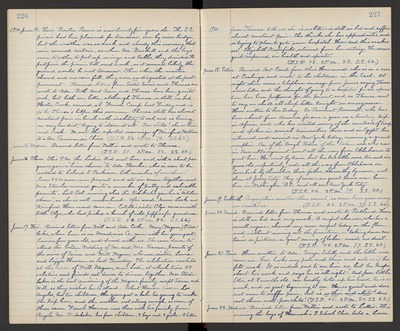 1910. June 14. Tues. Benton Pascoe is now twentyfive years old. The S.S. picnic had been planned for tomorrow, over by river bridge, but the weather was so dark and cloudy this morning that rain seemed certain, so when Mr. Burkett and the boys came together to put up swings and tables, they decided to postpone the picnic till next week, as it seemed likely the ground would be wet tomorrow. Then when the weather cleared and no rain fell, they were so disgusted at the postponement. Received letters from Sister Susie and Theresa and wrote to Ada. Both Aunt Susie and Theresa have been quite sick, but both are better, although Theresa is still in bed. Hester Cooke arrived at French Camp last Friday and is to be Theresa's helper this summer. Theresa still has almost constant pain in bowels with inability to eat, and is living on very low diet, trying to "starve it out." Poor child! she is thin and weak. We note the reported marriage of Winifred Wallace to a Mr. Cameron in Chico. (T.S.F. 52. 2 P.M. 76. S.S. 62.)

June 16. Thurs. This P.M. the Ladies Aid met here and, with a short program, gave a "linen shower" to Ada Stemler, who is soon to be wedded to Leland S. Parkison, both members of our church. Some 25 or more were present and ate ice cream together, and Miss Stemler received quite a member of pretty and valuable presents. Last Sat. evening also the Rebekahs gave her a "kitchen shower", so she is well remembered. Afterwards, Marie Locke and Winifred Hammond came in. Estelle's sister Olga came in with little Olga, who had picked a bunch of wild poppies for grandma. (T.S.R. 50. 2 P.M. 82. S.S. 66.)

June 17. Fri. Received letters from Will and Ada Cooke. Mary (Wagner) Studebaker, whose home is in Mendocins Co., came with her youngest, Eunice, four years old, and dined with us. She came down to attend the Golden Wedding of Mr. and Mrs. Hansen, parents of the wives of Simon and Will Wagner, who were sisters, Laura and Lizzie Hansen, on last Tuesday. The Celebration was held at the house of Will Wagner, near Lodi, at which time 43 relatives and friends sat down to dinner together. Mrs. Studebaker is the last remaining of the Wagner family, except Simon and Will, so they wished her to attend. Robert Hansen lives in Los Angeles, has ten children, the youngest a babe too young to make the trip here, and the mother not strong enough, so none of them came. Frank Hansen was there with his family from Angels. Mrs. Studebaker has four children, 2 boys and 2 girls. A letter

1910. from Theresa tells us she is no better & is still in bed and suffers almost constant pain. She thinks she has appendicitis, and is trying to plan to go to some hospital. How sad this makes us! Elizabeth Westerfield returned from her outing. She seems quite improved in health and spirits. (T.S.R. 48. 2 P.M. 83. S.S. 64.)

June 18. Satur. Received Post-Card from Alice Hammond who is on a case at Coalinga and wrote to the children in the East. At night there came a telephone message from James saying Theresa seems better and the thought of going to a hospital for an operation has been postponed for the present, and as Theresa sent to say, we shall all sleep better tonight in consequence. Have written to her today. Ex. President Roosevelt, who has been absent from America for over a year on a hunting trip in Africa, and who has visited many of the countries of Europe and spoken in several Universities there and in Egypt, has returned, and arrived in New York today, receiving a grand reception. One of the "Rough Riders" of the Cuban war, who was in Roosevelt's regiment, went all the way from Oklahoma to greet him. He went by train, but his two little sons, ten and six years old respectively, rode all the way from Oklahoma on horseback by themselves, their father, Abernathy by name, met them at Jersey City. They, of course, are great heroes now, have been in Washington, D.C. and all over New York City. (T.S.R. 46. 2 P.M. 79. S.S. 64.)

June 20. Mond. Received letter from Theresa and wrote to Portland. Theresa is still in bed and very weak. A carpet-cleaner, who has a small engine, cleaned my room carpet today on the floor and without moving out the furniture, or taking down curtains or pictures - a great saving of labor - made no dust. (T.S.R. 46. 2 P.M. 77. S.S. 64.)

June 22. Wednes. Received letter from Willie and wrote to Lottie. This evening, the boys of Hannah's S. School Class, held a Lawn