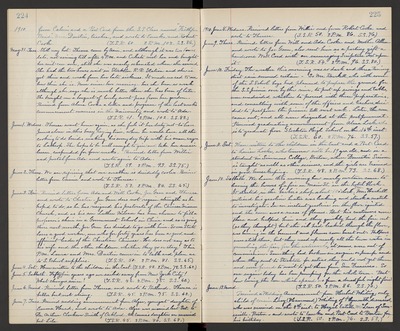 May 31. Tues. Still very hot. Theresa came by train, and although it was two hours late, not arriving till after 4 P.M. and Celeste met her and brought her suit-case over, still she was nearly enchanted when she arrived. She had the two hours wait in Stockton R.R. Station and she is yet thin and weak from her late sickness. It made us sad to see how thin she is. Never since her marriage has she been so weak although she says she is much better than she has been of late. She brought me a bouquet of lovely sweet peas from her garden. Received from Alma Cooke a letter and program of the last week's Commencement exercises in the University and wrote to Ada. (T.S.R. 61. 2 P.M. 102. S.S. 83.)

June 1. Wednes. Theresa went home again, as she feels it her duty not to leave James alone in this busy having time, when he would have all the cooking to do, besides making his every day trip with his cream wagon to Lathrop. She hopes to be well enough to give and take her music lesson, suspended for four weeks. Received letter from Willie and postal from Ada and wrote again to Ada. (T.S.R. 59. 2 P.M. 93. S.S. 75.)

June 3. Fri. Received letters from Ada and Will Cooke, Jee Gam and Theresa and wrote to Chester. Jee Gam does not regain strength as he hoped to do, so he has resigned his pastorate of the Chinese Mission Church, and as his son Luther McLean has been chosen to fill a professor's choir in a Government School in China and so is going there next month, Jee Gam has decided to go with him. So our State loses a good worker, one who for forty years has been a good and efficient leader of the Christian Chinese. He does not say as to his wife and the other children, whether they go or stay. This P.M. Laura and Mrs. Dustin came in to talk and plan as to S. School supplies. (T.S.R. 50. 2 P.M. 81. S.S. 65.)

June 9. Thurs. Received letters from Will and Ada Cooke and Mother Allen and wrote to Jee Gam, also sent him as a parting gift a handsome Wall Card with an encouraging Scripture Text upon it. (T.S.R. 54. 2 P.M. 96. S.S. 80.)

June 10. Friday. The weather this morning was so dark and threatening that rain seemed certain. So Mr. Burkett, who with some of the S. School boys had planned to prepare the ground for the S.S. picnic over by the river, to put up swings and tables, were undecided whether to proceed with these preparations, and consulting with some of the officers and teachers, decided to postpone the picnic till next week. Later, the sun came out, and all were disgusted at the postponement. Received graduating announcement from Alma Locke who is to graduate from Stockton High School on the 16th inst. (T.S.R. 60. 2 P.M. 76. S.S. 57.)

June 11. Sat. Have written to the children in the East and a Post-Card to Louise Locke, who tomorrow will be 19 yrs. old, and is a student in Simmons College, Boston, where Domestic Science is taught as well as other sciences, and the girls are trained in good housekeeping. (T.S.R. 48. 2 P.M. 73. S.S. 68.)

June 12. Sabbath. We learn this morning how nearly our town came to having the hours of a fire on Main St. in the Hotel block. It started in the barber's shop about 10 o'clock P.M. Mr. Haskell noticed his gasoline heater was leaking and struck a match to investigate. In an instant gasoline on the floor ignited and the room was a mass of flames. But his customers were there and helped him and they quickly had the fire out (as they thought) but the oil has leaked through the floor, was burning in the basement and flames soon burst out. Helpers were still there, but they used up nearly all the town water in quenching the fire, for the waterworks, it seems were out of commission. Something had broken in engine or pump and when they sent to Stockton for extras they could not get them and were forced to wait to get them from San Francisco. So our engine today has been pumping for the whole town. But how loving the case which spared us from a dreadful night fire! (T.S.R. 50. 2 P.M. 86. S.S. 70.)

June 13. Mond. Received a Wedding Announcement from Herbert Whiting, only child of cousin Lucy (Hammond) Whiting of Plymouth, deceased, who was married on the 8th inst. to Hazel Estelle McLean of Somerville - Boston - and wrote to Eureka and Post-Card to Benton for his birthday. (T.S.R. 50. 2 P.M. 76. S.S. 58.)