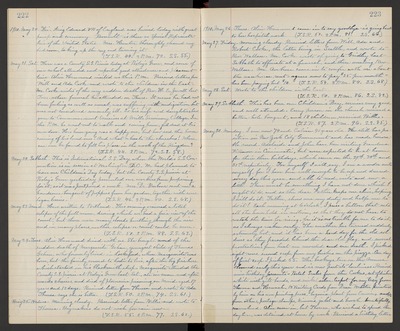 1910. May 20. Fri. King Edward VII of England was buried today with great pomp and ceremony. Roosevelt is there as Special Representative of the United States. Mrs. Hunter thoroughly cleaned my bedroom, taking up the rug and turning it. (T.S.R. 44. 2 P.M. 72. S.S. 55.)

May 21. Sat. There was a County S.S. Picnic today at Pixley's Grove, and some of our school attended and reported good attendance and pleasant time. Alice Hammond visited us this P.M. Received letters from Will and Ada Cooke and wrote to the children in the East. Mr. Cooke writes of the very sudden death of Rev. H.E. Jewett last Tues. whose funeral he attended on Thurs. It seems he had not been feeling as well as usual, was suffering with indigestion but was not considered seriously ill. So his wife and daughters had gone to Commencement Exercises at Mills Seminary College. In the P.M. he went out to walk and coming home, fell dead at his own door. His home going was a happy one, but how sad the home coming of his loved ones! And what a loss to the churches! Where can one be found to fill his place in the work of the Kingdom? (T.S.R. 44. 2 P.M. 72. S.S. 58.)

May 22. Sabbath. This is International S.S. Day, when the World's S.S. Convention is in session at Washington, D.C. We had planned to have our Children's Day today, but the County S.S. picnic at Pixley's Grove yesterday prevented our workers from preparing for it, so it was postponed a week. Mrs. Dr. Barbour sent me a handsome bouquet of poppies from her garden, together with some logan berries. (T.S.R. 45. 2 P.M. 80. S.S. 68.)

May 23. Mond. Have written to Portland. This evening occurred a total eclipse of the full moon, during which we had a fine view of the comet, but there were many clouds hustling through the air and in many places, neither eclipse or comet could be seen. (T.S.R. 50. 2 P.M. 88. S.S. 63.)

May 24. Tues. Alice Hammond dined with us. She brought word of the sudden death of Marguerite Gehan, youngest child of Thomas Gehan, who formerly lived in Lockeford, where Marguerite was born, but the family moved to Lodi to live, after the big fire here which started in his blacksmith shop. Marguerite attended the County S.S. picnic at Pixley's Grove last Sat., ate ice cream and after wards cherries, and died of ptomaine poisoning on Mond. aged 17 years and 12 days. Received letter from Theresa and wrote to Ada. Theresa says she is better. (T.S.R. 50. 2 P.M. 74. S.S. 61.)

May 27. Friday. Morning cloudy. Received letters from Will, Ada and Robert Cooke, the latter being in Seattle, and wrote to Rev. Wallace. Mr. Cooke wrote of going to Gridley last Sabbath to officiate at a funeral, and these meeting Rev. Wallace. Mr. Ambrose came in to confer with me about the warehouse rent - agrees now to pay $25. per months - has been paying but $10. (T.S.R. 54. 2 P.M. 84. S.S. 68.)

May 30. Monday. I am now 74 and Calvin 41 years old. He still has position in New York City Government and has made honorable record. Adelaide and John have been visiting Grandma Fillmore in Cincinnati, but were expected to be at home for their three birthdays, which occur on the 29th, 30th and 31st respectively. For myself I will say, I am a wonder unto myself, for I have been well enough to be up and dressed every day this year, and able to read, write and sew a little. There must be something I have not done which I ought to do, and so the dear Father keeps me alive, hoping I will do it. Father, show me my duty and help me to do it! Each morning at 6 o'clock, I press a button that sets all the household in motion, so that they do not have to watch the time for rising, for it is no trouble for me to do it, as I always waken early. The weather has turned suddenly extremely hot, and it has been a hard day for the old soldiers as they paraded behind the dear old flag, and several prostrations from heat are recorded and one death. I picked eight roses, second crop, from my bushes on the piazza. One day of first crop I picked 55. The buckeye tree on the Avenue bloomed early this year and is now past its loveliness. Received nine birthday presents - Postal Scales from the Cookes, set of dishes white with gilt bands, and nickel silver teapot for any tray from Theresa and Hannah, 12 Visiting Cards from Dean Webster printed by him on his own printing press, begonia plant from Eunice, and from others, postage stamps, Kimono, jabot and brooch - beautifully remembered. Alice came in, but Theresa, who wished to spend the day here, was detained at home by work. Received a birthday letter