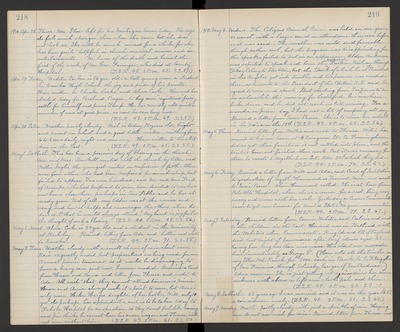 1910. Apr. 28. Thurs. Mrs. Shaw left for her Michigan house today. She says she feels much stronger than when she came but she does not look so. She will be much missed for a while, for she has been quite helpful in church musical services and in entertainments. We learn of the death and burial the first of the week, of Mr. Geo. Faringer, who died at County Hospital. (T.S.R. 45. 2 P.M. 65. S.S. 57.)

Apr. 29. Friday. Webster Parker is 16 yrs. old. - a tall young man, a student in Eureka High School the joy and pride of his parents. Have written to Chester Locke and Alma Cooke. Howard has started today for Portland, Oregon, to buy more "registered" Jersey cattle for himself and James Thorp. He has recently sold quite a number of cows at good prices, so now he can buy more. (T.S.R. 43. 2 P.M. 69. S.S. 57.)

May 1. Sabbath. This has been a precious day of blessing in the Church. Mr. and Mrs. Burkett united with the church by letter and Nellie Inglis, the youngest united on confession of faith. There were four others who had been proposed for membership, but failed to appear. Two were hindered, and Mr. and Mrs. Ford of Acampo, who had proposed to join, have decided to make a new home elsewhere, perhaps in Paso Robles, and he has already gone. Best of all, my Eddie was at the service and sang, and how it helps and encourages the others, when he does so. O that he would always attend! My heart is joyful at the thought of such a blessing. (T.S.R. 40. 2 P.M. 68. S.S. 56.)

May 3. Tues. Weather cloudy with a small shower of rain about noon. Rain is greatly needed, but preparations are being made for our Annual picnic tomorrow, so it would be discouraging to have a heavy rain just now, however needed. Received a Card from Horace and Anna and letter from Theresa and wrote to Ada. All write that they cannot attend tomorrow's picnic. Horace and Anna always make it a point to come, but Anna's only niece, Helen Harjes, daughter of her brother Will, only 10 yrs. old perhaps, has appendicitis, and is to be taken today to Fabiola Hospital for an operation, so they do not feel like leaving and Jim thinks he cannot leave his cream wagon, and Theresa will not come without him. (T.S.R. 47. 2 P.M. 61. S.S. 50.)

1910. May 4. Wednes. The Citizens Annual Picnic was held in our grove as usual, with a larger crowd in attendance than ever before so it was said. The weather was mild and favorable though rather cool, but the program was disappointing, for the speaker failed to put in an appearance. Alden Anderson was expected to speak and boom the proposed Traction Railway through Tokay Colony to Stockton, but the Bank of which he is President in Los Angeles got into trouble, and his presence as needed there, so he wrote to the President of the Electric R.R. and he agreed to come and speak. But starting from Sacramento in an automobile this morning for Lockeford, his machine broke down, and he did not reach us till evening. For a wonder on picnic day. I had not a bit of company all day. Received a letter from Susie Pascoe. She is to close her school in La Moine on the 13th. (T.S.R. 43. 2 P.M. 65. S.S. 56.)

May 5. Thurs. Received letter from Willie and wrote to Theresa. Willie has moved to his new house at 4 Evergreen St. So. Framingham, but as yet their furniture is not settled into place, and the painters have not finished their work. But it was necessary for them to vacate 5 Myrtle S. on Sat. Apr. 30th which they did. (T.S.R. 40. 2 P.M. 70. S.S. 63.)

May 6. Friday. Received a letter from Will and Ada, and Card of Invitation to graduation of Myrtle Hammond as Trained Nurse, and wrote to Susie Pascoe. Alice Hammond called. She is at home from Palo Alto Hospital, where she is a nurse, for a rest, being very weary and worn with her work. Yesterday a Census Enumerator came to get our Census for United States ten year enumeration. (T.S.R. 46. 2 P.M. 79. S.S. 67.)

May 7. Saturday. Received letters from Eunice Webster and Calvin and wrote to the children in the East. Howard was in Portland with the Webster when Eunice wrote. King Edward VII of England died last night of pneumonia after brief illness aged 68 yrs. having been King less than nine years. His eldest son succeeds him immediately as George V. (Have sold all the timber on my Blue Mt. Ranch for $3000. cash in Bank, to C.F. Ruggles of San Francisco, through Solinsky, lawyer if San Andreas.) Edna came in. She is just getting out again since her severe sickness with abscess on left arm - looks pale and thin. (T.S.R. 48. 2 P.M. 82. S.S. 70.)

May 9. Monday. Weather partly cloudy with just a sprinkle of rain. Haying men do not now wish for rain. Received letter from Theresa and