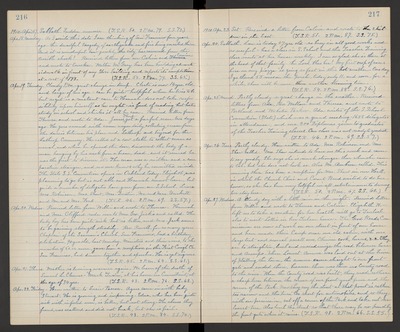 Apr. 18. Monday. As I write this date I am thinking of San Francisco four years ago - the dreadful tragedy of earthquake and fire being enacted there. And it is wonderful how quickly the city has recovered from the terrible shock! Received letters from our Calvin and Eunice and wrote to Eureka. Walter McGary has been building a cement side walk in front of my Store building and reports its completion at a cost of $173. (T.S.R. 52. 2 P.M. 79. S.S. 65.)

Apr. 19. Tuesday. Cloudy. P.M. - great change in temp. Cleste in now 14 yrs. old and large of his age - can be quite helpful when he tries to be but as yet a constant care to Hannah - does not take reponsibility upon himself as he ought - is fond of reading but hates study in school and shirks it all he can. Received letter from Theresa and wrote to Ada. James Thorp got a fearful scare two days ago. He goes around with cream wagon daily collecting cream from the dairies between his place and Lathrop and beyond for the Lathrop Creamery. He called at a cow stable to collect cream as usual, and when he opened the door, discovered the body of a man hanging by his neck from a beam, dead, and it seemed he was the first to discover it. The man was a milker and a comparative stranger, and no one knows why committed suicide. The State S.S. Convention opens in Oakland today. Elizabeth was planning to go but is not able and Hannah cannot leave, but quite a number of delegates have gone from our S. School, Laura Mrs. Robinson, Mrs. Shaw, Mrs. Dustin, Mr. and Mrs. Burkett and Mr. and Mrs. Ford. (T.S.R. 46. 2 P.M. 69. S.S. 57.)

Apr. 20. Wednes. Received letter from Willie and wrote to Theresa. Hannah and Mrs. Clifford rode over to Mrs. Geo. Jack's and called. The baby boy has been quite sick but is better, and Mrs. Jack seems to be gaining strength steadily. Rev. Rowell for so many years Chaplain of the Seaman's Church, San Francisco, had a birthday celebration, 90 yrs, last Monday. Ministers and their wives, to the number of 50 or more, gave him a reception in the First Cong'l Ch. San Francisco, had dinner together and speeches. He is yet vigorous. (T.S.R. 45. 2 P.M. 64. S.S. 61.)

Apr. 22. Friday. Have written to Susie Pascoe. Agnes came in with baby Stewart. He is growing and improving. Edna, who has been quite sick with infected arm, is better, but not strong. The abscess they feared, was scattered and did not break, but she is frail. (T.S.R. 48. 2 P.M. 84. S.S. 74.)

Apr. 25. Mond. Partly cloudy - a great change in the weather. Received letters from Ada, Rev. Wallace and Theresa and wrote to Portland and Webster Parker. Ada writes of the S. School Convention (State) which was a grand meeting - 1688 delegates in attendance, and over 200 Diplomas given to graduates of the Teacher Training classes. Our class was not ready to graduate. (T.S.R. 46. 2 P.M. 69. S.S. 57.)

Apr. 26. Tues. Partly cloudy. Have written to Ada. Mrs. Robinson and Mrs. Shaw called. Mrs. Shaw intends to leave us this week and came to say goodbye. She says she is much stronger than when she came to cal. but she does not look so. Also Mr. Ambrose called. This evening there has been a reception for Mrs. Shaw in our Hall, in which the Church Choir and Cornet Band united to do her honor, as she has been very helpful in all entertainment to during her stay here. (T.S.R. 50. 2 P.M. 67. S.S. 60.)

Apr. 27. Wednes. A Cloudy day with a little rain in the night. Received letter from Willie and wrote to Theresa and Calvin. Elizabeth W. left us to take a vacation for her health will go to Turlock also to visit Lottie in her Tulare home. The Good Roads Commission are now at work on our street in front of our house and have made their Camp near our old cabin, with one large tent and several small ones, Chinese cook, horses, &.c. They are to straighten, level and macadamize the road between here and Acampo. When Locust Avenue was laid out at the time of platting the town, the avenue came straight to our front gate and ended there, because there was then no County road to the river. When the County road was built, they made rather a sharp turn between the corner of our front yard fence and the corner of the Park. Now they say the street at that point is rather too narrow and the turn too short for automobiles, and so they, with our permission, cut off a corner of the Park and take out one locust tree. Also level the street so that there may be no pond by the front gate where it rains. (T.S.R. 48. 2 P.M. 66. S.S. 55.)