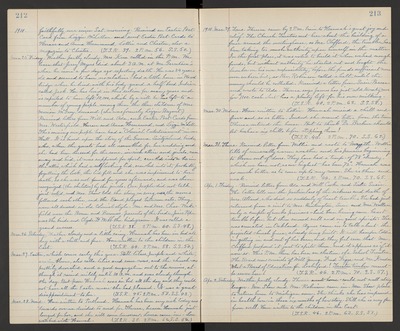 1910. faithfully ever since Sat. morning. Received an Easter Post-Cards from Lizzie McLellan and sent Easter Post-Cards to Horace and Anna Hammond, Lottie and Chester, also a Magazine to Chester. (T.S.R. 39. 2 P.M. 56. S.S. 50.)

Mar. 25. Friday. Weather partly cloudy. Mrs. Kerr called in the P.M. We learn that Jerry Myers died about 3 A.M. at Mr. Garretson's where he came a few days ago expecting death. He was 84 years old and seemed to have no relatives - had a little home in Woodbridge where he lived with his body-guard, a half-breed Indian called Jack. He has lived in this section for many years and is reputed to have left $10,000, which by a will he has left to a number of young people, among them the three children of Mrs. Marion McGary, deceased (she was formerly Lizzie Bryant.) Received letters from Will and Ada, and Easter Post-Cards from Mrs. Westerfield, Horace and Anna Hammond, and Lizzie McLellan. This evening our people have had a "Colonial Entertainment" in our Hall. It is based upon the story of the Geneva, Switzerland bride, who, when the guests had all assembled for her wedding and she had been dressed for the same, in rich attire and jewels, ran away and hid, it was supposed for sport, crawled into a box in the attic, which had a self locking lid, crawled into it, probably forgetting the lock, the lid fell and she was imprisoned to her death, as she was not found for years afterward, and was then recognized (the skeleton) by the jewels. Our people did not talk, just acted, and Mrs. Shaw told the story in song, the scenes followed each other, and the Band played between acts. They were all dressed in old Colonial style. Mr. and Mrs. Chas. Wakefield were the Baron and Baroness, parents of the bride, Josie Pope was the bride and Clyde Webb the bridegroom. It was called a grand success. (T.S.R. 38. 2 P.M. 60. S.S. 48.)

Mar. 27. Easter, which comes early this year. Still lilacs, purple and white, are in bloom, also calla lilies and some roses, and the church was prettily decorated, and a good congregation out to the services, although it rained mildly until 10 A.M. and was cloudy through the day. But poor Hannah was in bed all the day and they could not have all the Easter music she had planned. It was a great disappointment to her. (T.S.R. 45. 2 P.M. 53. S.S. 48.)

Mar. 28. Mond. Have written to Portland. Hannah has been very sick today and towards eve we decided to send for Theresa, because Hannah just longed for her, and she will come tomorrow. Laura came in. Lou watched with Hannah. (T.S.R. 38. 2 P.M. 62. S.S. 56.)

1910. Mar. 29. Tues. Theresa came by 2 P.M. train to Hannah's great joy and relief. The Church Trustees met here about the building of a fence around the meetinghouse, as Mr. Clifford, the troubler, has been taking too much authority upon himself in the matter. In the first place, it was voted to build it when we had enough funds, but without authority he started out and bought the lumber on his on his own responsibility, before the funds sufficient were even subscribed, so Rev. Robinson called a halt, until the money should be collected. Received a letter from Susie Pascoe and wrote to Ada. Theresa says James has just sold twenty cows for $1100. cash, but has a plenty left for his own milking. (T.S.R. 40. 2 P.M. 62. S.S. 58.)

Mar. 30. Wednes. Have written to Lottie. Hannah missed a chill and fever and so is better. Indeed she seemed better from the time Theresa entered the house. But to think Dr. Barbour should let her have six shills before stopping them! (T.S.R. 40. 2 P.M. 70. S.S. 62.)

Apr. 1. Friday. Received letter from Ada and Will Cooke and Sister Susie. The latter tells me the particulars of the sickness and death of Mrs. Allard, who died so suddenly of heart trouble. She had just returned from a visit to Mrs. Huntington, Susie and Mrs. Wallace only a couple of weeks previous - had been having some heart trouble before, but then seemed well and in good spirits. She was cremated in Oakland. Agnes came in to talk about the projected church fence, already being built. it will hamper Eddie in getting in and out of his barn, and they feel sure that Mr. Clifford proposed it just to spite them, and it appears as if it were so. This P.M. there has been an election of a School Trustee. The Board now consists of Will Young, Fred Figge and Mr. Knudsen. What a Board of Education for Lockeford! Trustee timber must be scarce here! (T.S.R. 46. 2 P.M. 70. S.S. 57.)

Apr. 2. Saturday. Weather partly cloudy. Theresa went home - could not well stay longer. Mrs. Shaw and Mrs. Robinson came in. Mrs. Shaw plans to return home to Michigan soon. She thinks she has improved in health here in these six months of her stay. Still she is very far from well. Have written to the children in the East. (T.S.R. 46. 2 P.M. 63. S.S. 53.)