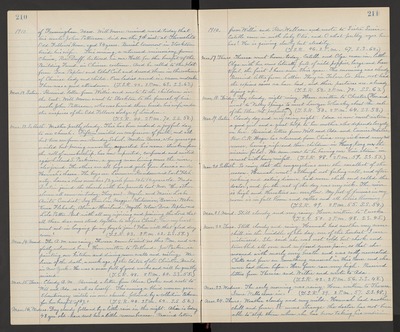 1910. of Framingham, Mass. Will Moore received word today that his uncle John Patterson died on the 9th inst. at Thermalito Odd Fellows' Home, aged 84 years. Burial tomorrow in Stockton beside his wife. This evening, a returned missionary from China, Rev. Duff, lectured in our Hall for the benefit of the Building Fund, in Chinese costume. And he called to the platform Dora Paplow and Ethel Coil and dressed them in the costume of Chinese lady and child. Our ladies served ice cream and cake. There was a good attendance. (T.S.R. 42. 2 P.M. 68. S.S. 63.)

Mar. 12. Satur. Received letter from Willie and wrote to the children in the East. Will Moore went to Stockton to the funeral of his uncle John Patterson, who was buried there beside his wife, under the auspices of the Odd Fellows Lodge of Linden. (T.S.R. 44. 2 P.M. 70. S.S. 58.)

Mar. 13. Sabbath. Weather partly cloudy. This has been indeed a joyful day to our church. Fifteen united on confession of faith, and all but two are from our Sunday School. Martin Burns, who years ago united but proving unworthy, requested his name stricken from the roll of membership, has now repented, confessed and united again. Leland S. Parkison, a young man living across the river, also joined. The others are all boys and girls from Laura's and Hannah's classes. The boys are Lawrence Knudsen and Earl Fleharty. Laura's class numbers 12 girls from 14 to 16 years old. Freda Dustin joined the church with her parents last Nov. The other eleven all came in today. They are! - Myrle and Marie Locke, Anita Condict, Ivy Stemler, Maggie Whitmeier, Bernice Weber, Verna Fleharty, Alvina Haviland, Myrtle Votaw, Dora Paplow and Lila Patter. But with all my rejoicing and praising the Lord that all these dear ones stood together to confess Christ, how my heart went out in longing for my boys to join! When will that glad day come? (T.S.R. 43. 2 P.M. 62. S.S. 58.)

Mar. 14. Mond. The A.M. was rainy. Theresa came to visit us this P.M. and we gladly welcomed her. Have written to Portland. Joe Parker is painting our kitchen and dining room walls and ceiling. We learn of the death, a week ago, of the Editor of the Christian Herald in New York. He was a man full of good works and will be greatly missed. (T.S.R. 48. 2 P.M. 60. S.S. 55.)

Mar. 16. Wednes. Day cloudy followed by a little rain in the night. Alice is today 48 yrs. old - have sent her a little remembrance. Received letters

Mar. 17. Thurs. Theresa went home today. Estelle and Olga came in, little Olga with her arms literally full of wild poppies, large and beautiful, the first I have seen this year. The morning was cloudy. Received letter from Lottie. They in Tulare Co. have not had the copious rains we have had, and their pastures are already drying up. (T.S.R. 52. 2 P.M. 72. S.S. 63.)

Mar. 19. Satur. Cloudy day and very rainy night. Edna is now "sweet sixteen," a good girl and a great help to her mother who depends largely on her. Received letters from Will and Ada and Eunice Webster. Rev. C.R. Hager has returned from China very sick and may not recover, leaving wife and three children in Hong Kong on the mission field. We seem now to be having our "line storm" in earnest with heavy rainfall. (T.S.R. 48. 2 P.M. 59. S.S. 53.)

Mar. 20. Sabbath. So rainy that the congregations were the smallest of the season. Hannah went, although not feeling well, and after cooking and eating dinner, had severe chill and called the doctor, and for the rest of the day was very sick. The river is high and threatens an overflow. My pot of frucias in my room is in full bloom and callas and all lilies blooming. (T.S.R. 49. 2 P.M. 55. S.S. 54.)

Mar. 22. Tues. Still cloudy and rainy. Hannah had another very severe chill in the middle of the day, one of the hardest I ever witnessed. She said she was not cold but shook and trembled all over and suffered severe pain, so that she moaned with nearly every breath and was sadly nauseated. Chills and fever are something unusual in this house and she never had them before. Her fever ran very high. Received letters from Theresa and Willie and wrote to Ada. (T.S.R. 42. 2 P.M. 56. S.S. 48.)

Mar. 24. Thurs. Weather cloudy and very mild. Hannah had another chill and fever. It seems strange the doctor has not been able to stop them when she has been taking his medicine