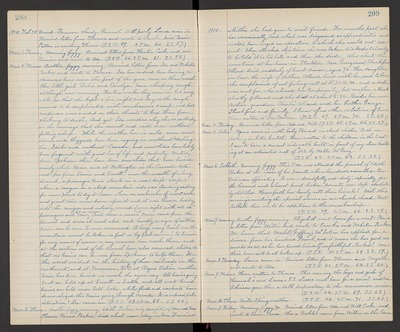 Mar. 2. Wednes. Another foggy morning. Received letters from Ida and Webster Parker and wrote to Theresa. Ida has indeed been having a strenuous time since the first of the year, more so than usual. Her little girls, Delia and Carolyn, have whooping cough, although now recovering. For two weeks they were in bed very sick, so that she kept a fire night and day, as the cough seemed to be complicated with membranous croup, and hot compresses were needed on their throats to keep them from chocking to death. And yet Ida wonders why she is so sleepy in the evenings that she cannot read, write or sew without falling asleep. While the weather here is wild, severe snow storms and blizzards have been raging in northeast Washington, Idaho and southwest Canada, and snow slides have lately been frequent, with great loss of life and property. Westerly from Spokane there have been snowslides that have buried nearly whole towns, and at Willington in the Cascade Mts. not far from Scenic and Everett, near the mouth of a long tunnel, a passenger train stuck in a snow drift 200 feet above a canyon on a steep mountain side was standing waiting for snow plows to dig it loose, when an avalanche of snow, rocks and giant trees came down upon it and it was thrown bodily into the canyon and entirely covered from sight with all its passengers and crew 60 or more. And soon a mail train came from the tunnel and down it went also, and hardly a sign of either train can be seen be seen uncovered. A long, weary trail over the mountain must be taken on foot or by pack animals to Scenic for any means of rescue or any rescuers can reach them, and at the eastern end of the tunnel have also occurred slides, so that no trains can be run from Spokane to help them. It is the worst accident in the history of those railroads in the northwest, and at Vancouver, B.C. at Rogers Station another train has been buried in much the same way. All trains going East are held up at Everett or Seattle, and all west bound trains are held near Salt Lake, while floods and washouts have demoralized the trains going through Nevada. It is a dreadful situation! Lou came in. (T.S.R. 43. 2 P.M. 68. S.S. 64.)

1910. whither she had gone to visit friends. For months past she has occasionally had what was diagnosed as appendicitis and doctors have urged an operation to which she would not consent. When attacked this time she was taken to a Hospital only to be told "it is too late" and there she died. Also about the same time, at her home in Stockton, Mrs. Georgiana (Shackford) Allard died suddenly of heart disease, aged 72. Her daughter-in-law, the wife of Arthur Allard, live with her, and to her she complained of not feeling well at 11:30 A.M. and a doctor was sent for, who relieved her temporarily, but another attack shortly followed and she died at about 2:30. Beside her son Arthur, grandson Charlie Allard, and her brother George Shackford and family, I know of no other relatives of hers. Have written to Rev. Wallace. (T.S.R. 47. 2 P.M. 70. S.S. 64.)

Mar. 6. Sabbath. Morning foggy. This P.M. was attended the funeral of Edith Parker at the house of her parents, where hundreds assembled, Rev. Robinson officiating. It was a dreadfully sad duty, especially for the bereaved and almost heart-broken parents, now left absolutely childless. Henceforth how lonely will their lives be! With this evenings meeting the special services in our church closed. Next Sabbath there are to be additions to the membership. (T.S.R. 39. 2 P.M. 66. S.S. 59.)

Mar. 7. Monday. another foggy morning. Elizabeth went home for a visit. Rec'd a letter from Willie and wrote to Eureka and Webster Parker. We learn that Mabel (Geffroy) McIntire has applied for a divorce from her husband Frank, and it seems she has good reasons to do so, as he has proved himself unfaithful - too bad! Now their home will be all broken up. (T.S.R. 41. 2 P.M. 64. S.S. 59.)

Mar. 11. Friday. Morning foggy. Received letters from Ada and Will Cooke and wrote to Susie Pascoe. Also a Booklet came from Willie on the town