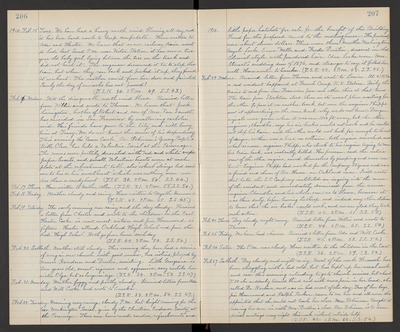 1910. Feb. 15. Tues. We have had a heavy north wind blowing all day, and it has been heard work to keep comfortable. Have written to Ada and Hester. We learn that as our railway train went to Lodi last Sund. P.M. near Victor Station it ran over a two year-old baby girl, lying between the ties on the track and did not hurt it. The engineer discovered it too to stop the train, but when they ran back and picked it up, they found it unhurt. The mother saw it from her door and fainted. Surely the day of miracles has not passed! (T.S.R. 30. 2 P.M. 49. S.S. 43.)

Feb. 16. Wednes. Still the disagreeable north wind blows. Received letter from Willie and wrote to Theresa. We learn that Jack Livingston, brother of Robert and son of Mrs. Van Sandt, has suicided in San Francisco by swallowing carbolic acid. His friends have gone to the City and will bury him at Tracy. We do not know the cause of his despondency. This evening the "Crown Circle," Rev. Robinson's Young People's Bible Class, has held a Valentine Social at the Parsonage. The rooms were prettily decorated with red and white crepe paper hearts, and small Valentine hearts were at each plate at the refreshment table, also "cobweb" strings led each one to his or her "sweetheart" which was nothing more nor less than a candy heart. (T.S.R. 30. 2 P.M. 50. S.S. 46.)

Feb. 19. Saturday. The early morning was rainy and the day cloudy. Received a letter from Chester and wrote to the children in the East. Hester Cooke is now sweet sixteen and Jim Hammond is fifteen. Hester attends Oakland High School and Jim the Lodi High school. Both go from home each day. (T.S.R. 44. 2 P.M. 54. S.S. 50.)

Feb. 20. Sabbath. Weather still cloudy. This evening they have had a service of song in our church with good music, two violins, played by Messrs. Knudsen and Dustin, assisting. Little Georgiana is two years old, smart, vigorous and aggressive, very unlike her sister Olga, but as large in size. (T.S.R. 34. 2 P.M. 53. S.S. 47.)

Feb. 22. Tuesday. Morning very rainy, cloudy P.M. but bright evening for the Geo. Washington Social, given by the Christian Endeavor Society at the Parsonage. There were home-made candies, refreshments and

1910. little paper hatchets for sale for the benefit of the Building Fund for the proposed Annex to the meeting house. The proceeds were about eleven dollars. There were three "Martha Washingtons", Myrle Locke, Erma Wells, and Freda Dustin, dressed in old Colonial style, with powdered hair. Edna Locke wore Mrs. Stewart's wedding dress of 1876, and strange to say, it filled her well. Have written to Eureka. (T.S.R. 42. 2 P.M. 48. S.S. 48.)

Feb. 23. Wednes. Received letter from Theresa and wrote to Louise. At 4:15 P.M. a sad accident happened at French Camp R.R. Station. Daily the trains to and from San Francisco pass each other there at that time. The train from Stockton stood there in its usual place waiting for the other to pass it on another track, but soon the engineer Phipps saw it approaching on the same track - why, we do not know. Danger signals were given when it was over 1100 ft. away, but the other engineer, Chandler, says his air-brakes would not work and he could not stop his train, and the other could not back far enough to be out of danger, so there was a head-on collision, both engines smashed, and what is worse, engineer Phipps, who stuck to his engine trying to run his train back, was instantly killed. His fireman, and the entire crew of the other engine, saved themselves by jumping and were unhurt. Engineer Phipps had worked for the Company 35 years and was a friend and chum of Bro. Horace, an Oakland man. I will write that later the S.P. Company instituted an inquiry into the cause of the accident, and immediately dismissed from the service engineer Chandler and his whole crew, as to blame, because it was their duty, before leaving Lathrop, and indeed any other station to know that the air-brakes would work, and we are glad they took such action. (T.S.R. 42. 2 P.M. 61. S.S. 57.)

Feb. 27. Sabbath. Day cloudy and night rainy. Most of the week Hannah has been struggling with a bad cold, but has kept up her usual work and rose this morning intending to go to church services, but about 7:30 she suddenly turned blind and with severe pain in her head, she called Dr.Barbour, and was in bed most of the day. Two of her boys, Jim Hammond and Ralph Parker, came to see her and all were disappointed that she could not teach her class. Mrs. Robinson taught it turning her own in with Mrs. Dustin's class. Rev. Robinson is to have special meetings every night this week without outside help. (T.S.R. 42. 2 P.M. 62. S.S. 54.)