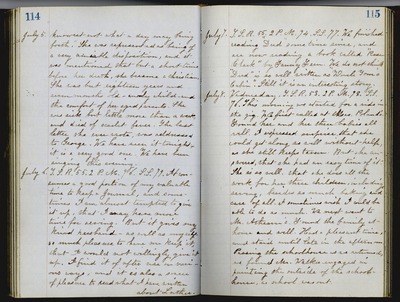 July 5. knowest not what a day may bringforth. "She was represented as being ofa very amiable disposition, and itwas mentioned that but a short timebefore her death, she became a christian.She was but eighteen years andseven month old - surely child andthe comfort of her aged parents. Shewas sick but little more than a week,and died of scarlet fever. The lastletter she ever wrote, was addressedto George. We have seen it tonightit is a very good one. We have beensinging this evening.July 6. T.S.R. 55. 2 P.M. 96. S.S. 79. It consumesa good portion of my valuabletime to keep a Journal, and sometimesI am almost tempted to giveit up, that I may have moretime for sewing. But it gives mykind husband as well as myselfso much pleasure to have me keep it,that I would not willingly, give itup. I fried it of after use in variousways, and it is also a sourceof pleasure to read what I have writtenabout Luther.July 7. T.S.R. 55. 2 P.M. 94. S.S. 77. We finishedreading "Dred" some time since, andare now reading a book called "RoseClark" by Fanny Fern. We do not think"Dred" is so well written as "Uncle Tom'sCabin." Still it is an interesting story.July 8. Wednesday. T.S.R. 53. 2 P.M. 93. S.S.76. This morning we started for a ride inthe gig. We first called at Mrs. Poland's.Found her and her three babies allwell. I expressed surprise that shecould get along as well without help,as she still keeps tavern. But she answered,that she had an easy time of it.She is so well, that she does all thework for her three children, includingsewing, besides so much baking andcare of all. I sometimes wish I could beable to do as much. We next went toMr. Athearn's. Found the family athome and well. Had a pleasant time,and staid until late in the afternoon.Passing the schoolhouse as we returned,we found Mr. Walker engaged inpainting the outside of the schoolhouse,as school was out.