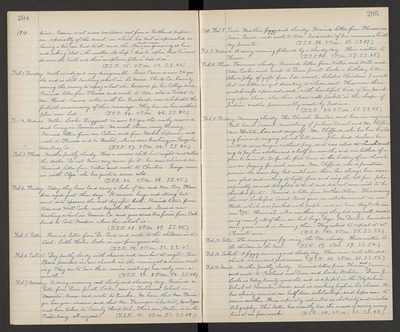 1910. time. Eunice sent some cartoons cut from a Portland paper - one especially of the comet, in which his tail is represented as having a tin can tied to it, and the stars and moon, are grinning at him and asking "What is the matter, old chap?" And he replies that he "went too near the Earth and those" aeroplane fellows "tied it on." (T.S.R. 35. 2 P.M. 54. S.S. 46.)

Feb. 1. Tuesday. North windy and very disagreeable. Susie Pascoe is now 26 yrs. old and is still teaching school in La Moine, Shasta Co., bravely earning the money to repay what she borrowed for her College course. Received letter from Theresa and wrote to Ada, also a postal to Mrs. Hurd - Emma - who, with her husband, now celebrates the fortieth anniversary of their marriage. They live on her mother's place near Lodi. (T.S.R. 34. 2 P.M. 46. S.S. 40.)

Feb. 2. Wednes. Nellie Locke Bergquest is now 25 yrs. old, newly married and living in Sacramento. We wish them every blessing. Received letters from our Calvin, and from Mabel Lopeman and wrote to Theresa and to Mabel, who is now teaching in Gonzales, Monterey Co. (T.S.R. 27. 2 P.M. 44. S.S. 40.)

Feb. 3. Thurs. Weather partly cloudy. Had a nervous chill last night and called the doctor. Do not know any cause for it - he soon relieved me. Received letter from Willie and wrote to Chester. George came in with Olga - she has quite a severe cold. (T.S.R. 26. 2 P.M. 48. S.S. 45.)

Feb. 4. Friday. Today they have laid away a babe of Mr. and Mrs. Roy Flanders, aged just three days. It seemed large and strong but went into spasms the next day after birth. Received letters from Ada and Will Cooke and Myrtle Hammond. Irene is now teaching school in Marin Co. and goes across two ferries from Oakland to Corte Madero, where her school is. (T.S.R. 28. 2 P.M. 49. S.S. 45.)

Feb. 7. Monday. A rainy morning and cloudy and showery day. Received a letter from Dean Jewett Locke, now in Technical School in Worcester, Mass. and wrote to Eureka. We learn that Mrs. Faringer has gone insane, and that Mr. Faringer is partially paralyzed and been taken to County Hospital. Their son, Archie, is in the Penitentiary - all very sad! (T.S.R. 41. 2 P.M. 51. S.S. 48.)

Feb. 10. Thurs. Forenoon cloudy. Received letters from Willie and Will and Ada Cooke and wrote to Dean Jewett Locke a birthday letter. Also a pkg. of gifts from Ida arrived, belated Christmas presents but no letter as yet directing to whom sent. There were three match-safes upon redwood, with beautiful birds of her painting upon them, also three straw wall-pockets in the shape of Indian cradles, presumably made by Indians. (T.S.R. 40. 2 P.M. 51. S.S. 49.)

Feb. 11. Friday. Morning cloudy. The Church Trustees met here in my room. Full board present, consisting of Julius Bruml and Mr. Clifford Mrs. Hatch, Lou and myself. Mr. Clifford, who has been building fires and ringing church bell since John died, declares he will do so no longer without pay, so it was voted at church meeting to pay him a dollar and a half per month, and we talked of a plan to raise it. So for the first time in the history of our church we are paying for such services. Mrs. Clifford, who is Janitress receives the same pay, but until now there has always been some one glad and willing to light fires and ring the bell free. John, especially, seemed delighted to do it, and did not even wish to be thanked for it. Received a letter from Mother Allen. This evening the new Lockeford Cornet Band gave an entertainment in our Hall, which was packed with people, and we hear they took in over $175. Hannah, who was there, says they did very well, considering nearly all of them are but large boys. Mr. Dustin has indeed done good work in training them. They intend to repeat it at Clements soon. (T.S.R. 40. 2 P.M. 55. S.S. 51.)

Feb. 14. Mond. Weather partly cloudy. Received letters from Theresa and Eunice, and wrote to Portland and Dean and Locke Webster. Dean J. Locke is today twenty years old, and is pupil in the Polytechnic School at Worcester, Mass. and is ranking high in his classes. He has already received one half-term scholarship, and hopes now to receive another. He is especially interested in electricity and wireless telegraphy. This latter has recently been the means of saving many lives at sea from wrecks. (T.S.R. 44. 2 P.M. 52. S.S. 48.)