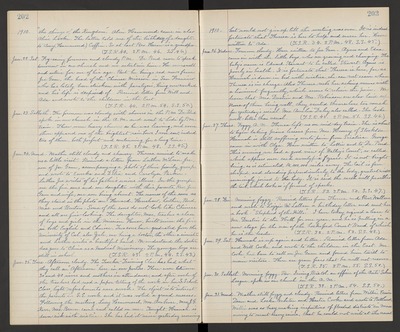 Jan. 22. Sat. Fog-rainy forenoon and cloudy P.M. Dr. Pond came to speak tomorrow in our church and we entertain him. He seems well and active for one of his age. But he brings sad news from Jee Gam, the head of the Chinese Mission in San Francisco who has lately been stricken with paralysis, being over worked and his life is despaired of. Received letters from Will and Ada and wrote to the children in the East. (T.S.R. 44. 2 P.M. 54. S.S. 50.)

Jan. 23. Sabbath. The forenoon was cloudy with showers in the P.M. Dr. Pond spoke in our church in the A.M. and went to Lodi by P.M. train. There were heavy showers as he was leaving, and soon there appeared one of the brightest rainbows I ever saw, indeed two of them, both perfect and continuing for a long time. (T.S.R. 45. 2 P.M. 48. S.S. 45.)

Jan. 24. Mond. Weather still cloudy and showery. Theresa arrived to make us a little visit. Received a letter from Luther McLean Jee, son of Jee Gam, accompanying a photo of their family group, and wrote to Eureka and Delia and Carolyn Parker. Luther Jee writes of his father's serious illness. In the group are the five sons and one daughter with their parents, Rev. Jee Gam and wife, one son being absent. The names of the sons as they stand in the photo are Howard, Henshaw, Luther, Pond, Mae and Benton. Some of the sons do not look like Chinese and all are fine-looking. The daughter, Mae, teaches a class of boys and girls in the Mission House, built since the fire in both English and Chinese. Two sons have graduated from the University of Cal. also Yale, one being a doctor, the other a minister and Luther writes a beautiful hand. We understand the doctor has gone to China as a Medical Missionary. The younger boys are still in school. (T.S.R. 43. 2 P.M. 44. S.S. 43.)

Jan. 25. Tues. Afternoon cloudy. The Teacher - Training Class has had what they call an "Afternoon" here in our parlors. There were between 30 and 40 wives and mothers in attendance, and after each of the teachers had read a paper telling of the work in her S. School Class, light refreshments were served. The object is to interest the parents in S.S. work and it was voted a grand success. Following the meeting, Lucy Hammond, Mrs. Ambrose, Mrs. J.G. Kerr, Mrs. Brown came and called on me. Tonight, Hannah is down sick with sciatica. She has had it since yesterday morning

Jan. 26. Wednes. Forenoon cloudy. have written to Jee Gam. Agnes and Edna came in with the little boys, who are growing and changing. The baby's name is Edward Stewart to be called Stewart. Agnes is poorly in health. It is fortunate that Theresa is here, for as Hannah is down in bed with sciatica, she can rest easier when Theresa is in charge. Also Theresa rubs her aching nerves with a liniment frequently, which seems to relieve the pain. We learn that Mrs. Dustin and Mrs. Robinson are also laid up. None of them being well, they exerted themselves too much for yesterday's social. Mrs. Amelia Daley also called. She looks well-better than usual. (T.S.R. 42. 2 P.M. 51. S.S. 46.)

Jan. 27. Thurs. Foggy A.M. Theresa left us on mid-day train. She is about to begin taking piano lessons from Mrs. Henerey of Stockton. Hannah is still suffering acute pain from Sciatica. George came in with Olga. Have written to Lottie and to Dr. Pond. This evening we had a good view of "Halley's Comet," so called which appears once each seventy five years. It is not bright being, as is estimated, 14,000,000 miles away. The tail is fanshaped, and standing perpendicularly to the body, greatest width seemingly joined to the body. It is said the earth will passthro' the tail, which looks as if formed of sparks. (T.S.R. 33. 2 P.M. 50. S.S. 47.)

Jan. 28. Fri. Morning foggy. Received letters from Theresa and Rev. Wallace and wrote to Lizzie McLellan a birthday letter and sent her a book - "Shepherd of the Hills." I have today signed a lease to Mr. Dustin to the Hall for one year, and he is putting in a new stage for the use of the Lockeford Cornet Band, of which he is the leader. (T.S.R. 32. 2 P.M. 52. S.S. 48.)

Jan. 29. Sat. Hannah is up again and better. Received letter from Ada and Will Cooke and wrote to the children in the East. Mr. Cooke had been to call on Jee Gam and found him too ill to receive visitors. There are grave fears that he will not recover. (T.S.R. 35. 2 P.M. 55. S.S. 50.)

Jan. 31. Mond. Weather still foggy and cloudy. Received letters from Willie, Eunice Dean and Locke Webster and Hester Cooke and wrote to Portland. Willie was so busy making inspections of flooded districts in Mass. owing to recent heavy rains, that he could not write at the usual