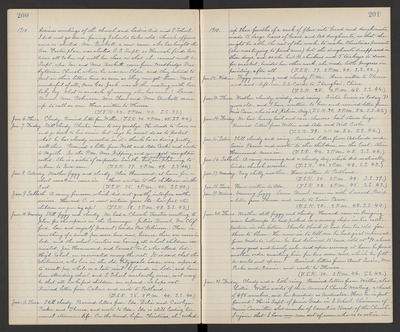 1910. business meetings of the church and Ladies Aid and S. School. I did not go down, fearing I should take cold. Church officers were re-elected. Mr. Burkett, a new comer, who has bought the Geo. Foster place, was elected S.S. Supt., as Hannah finds her time all taken up with her class, so that she cannot well be Supt. also, Mr. and Mrs. Burkett come from Woodbridge Presbyterian Church, where he was an Elder, and they intend to put in their letters here as soon as they can get them. Most wonderful of all, Mrs. Geo Jack was at the meeting with her baby boy. What a miracle of recovery she has made! Laura Bruml, Mrs. Robinson, Mrs. Shaw and Mrs. Burkett came up to call on me. Have written to Theresa. (T.S.R. 24. 2 P.M. 40. S.S. 37.)

Jan. 7. Friday. Still cloudy. Chester came to say goodbye. He dreads to leave us and go back to his mine but says he must do so to protect what he has already invested in it - thinks he is doing pretty well there. Received a letter from Will and Ada Cooke and wrote to Myrtle. In the P.M. Mrs. Kipping and youngest daughter called. She is a sister of carpenter Smith, but she and family are planning to return to Iowa soon. (T.S.R. 37. 2 P.M. 49. S.S. 44.)

Jan. 10. Monday. Still foggy and cloudy. We had a Church Trustee meeting to plan for the repairs on the Parsonage - Julius Bruml, Mr. Clifford, Lou and myself present, besides Rev. Robinson. There is something of a small-pox scare here now, because there are cases in Lodi, and the school directors are having all school children vaccinated, Jim Hammond and Earnest Coil, who attend Lodi High School, are vaccinated among the rest. It is said that the Whitmeiers, who live in the old Fitzgerald house, were exposed to small-pox, while on a late visit to friends in Lodi, and have been attending school and S. School constantly since, so it may be that all Lockeford children are exposed - we hope not. Received letter from Calvin and wrote to Portland. (T.S.R. 35. 2 P.M. 40. S.S. 40.)

Jan. 11. Tues. Still cloudy. Received letters from Ida, Delia and Carolyn Parker and Theresa, and wrote to Ada. Ida is still leading her usual strenuous life. On the Mond. before Christmas, she cooked

1910. up three-fourths of a sack of flour into bread and doughnuts, made 15 large loaves of bread and 144 doughnuts, so that she might be able, the rest of the week, to make Christmas presents (she was trying to paint some) but the doughnuts disappeared in three days, and as she had 16 chickens and 5 turkeys to dress for market, besides her other work, she made little progress in painting, after all. (T.S.R. 37. 2 P.M. 44. S.S. 42.)

Jan 20. Thurs. Weather still foggy and cloudy. Howard came in bringing some buttercups he had picked on a sunny slope in his cattle pasture in the bottom. Should think it had been too cold for them to bloom. He came in to tell me he had just returned from Modesto, where he had delivered 15 cows, sold at $90. ahead a very good and timely sale, and upon arriving at home he found another order awaiting him for two more cows, which he felt he could not spare. Received letters from Aunt Susie, Mrs. Perks and Eunice, and wrote to Theresa. (T.S.R. 30. 2 P.M. 46. S.S. 42.)

Jan. 21. Friday. Cloudy and a little rainy. Received letters from Willie, also Lottie. Willie writes of their Annual Church Meeting, a church of 498 members, and he presided as Moderator. How he is put forward! He is Supt. of Junior Grade in S. School, Chairman of Music Committee also member of Executive Board of the Church. I rejoice that I have one son out of seven who is so active in