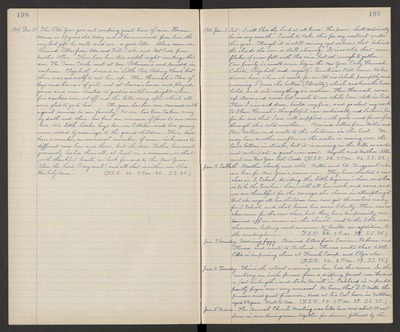 1909. Dec. 31. The Old Year goes out weeping great tears of rain. Horace Mann is 49 years old today and I have received from him the very best gift he could send me - a good letter. Alma came in. Received letters from Ada and Will Cooke and Post Card from Mother Allen. There have been two watch night meetings this eve. The "Crown Circle" met at Mr. Robinson's and paraded in costume. Elizabeth dressed as "Little Red Riding Hood" but there was no wolf to eat her up. Then Hannah's Class of boys and Laura's of girls met at Laura's house and played games and were treated to goodies until midnight, when fire crackers were set off and the bells rung, after which all were glad to go to bed. The year has been one crowned with signal merries to our family. No one has been taken away by death and there has been an increase of four to our numbers - two little Locke boys born in October - and two young men added by marriage to the grand-children. There have been a number, an unusual number, of severe sicknesses to different ones here and there, but the dear Father has most graciously healed them all, at least in a measure, so that with thankful hearts, we look forward to the New Year. "Bless the Lord, O my soul!" and all that is within me bless His holy Name." (T.S.R. 46. 2 P.M. 46. S.S. 44.)

1910. Jan. 1. Sat. I will bless the Lord at all times! His praise shall continually be in my mouth." I wish to take this for any constant motto this year. Though it is still raining yet we know that "behind the clouds the sun is still shining." It is so cold that some flakes of snow fall with the rain, but not enough to gather. Our family is small as we begin the New Year. Only Hannah, Celeste, Elizabeth and myself. Sometimes Will Moore takes dinner here, when at work for us. At six o'clock promptly each morning I "press the button" (literally) which awakens the house hold, and sets everything in motion. Then Hannah comes upstairs and serves hot mush to me while I am still in bed. Then I rise and dress, build my fire, and go about any work. So I have Hannah's thoughtful care continually and Luther's, too for he sees that I am well supplied with good wood for our fire through this cold weather. Received letters from Willie and Rev. Wallace and wrote to the children in the East. We may have another overflow, as the water is coming over the lower bottom in streaks, but it is snowing in the hills so we do not anticipate a great rise now. Myrtle and Mother Allen sent me New Year Post-Card. (T.S.R. 34. 2 P.M. 42. S.S. 38.)

Jan. 2. Sabbath. Weather cloudy and cold. Nellie and Ed. Bergquest, who are here for New Year's, came in. They have started a new class in S. School, dividing the little beginner's class, and Lou is to be the teacher - Lou, with all her work and cares, and we are thankful for the courage she shows in attempting it. But she says all her children can now get themselves ready for S. School, and that leaves her more liberty. There was no class room for the new class, but they have temporarily curtained off one corner in the church, next to the little ones' class room, hoping next summer to build an addition to the meeting house. (T.S.R. 30. 2 P.M. 37. S.S. 35.)

Jan. 4. Tuesday. This is the coldest morning we have had this season. In the courtway, an icicle formed from a dripping faucet over the sink a foot in length, and Lake Merritt in Oakland is reported partly frozen over-very unusual. We learn that D.O. Mills, the pioneer and great financier, died at his Cal. home in Millbrae aged 84 years. Wrote to Ada. (T.S.R. 24. 2 P.M. 39. S.S. 35.)

Jan. 5. Wednes. The Annual Church Meeting was held here and about 30 sat down in our dining room together for dinner, followed by the