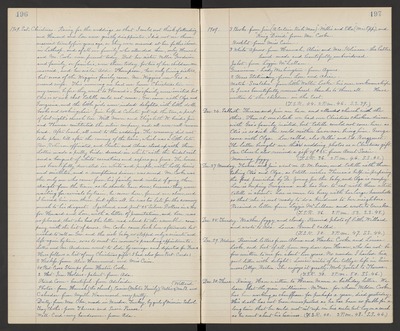 1909. Sat. Christmas. Rainy for the weddings, so that I could not think of attending and Howard and Lou were greatly disappointed. I did not see them married twentyfive years ago, as they were married at her father's home in Lathrop, and of all our family who attended then, only Hannah and Mr. Cooke were present today. But her sister Nellie Goodwin and family, or families, were there today, for two of her children are married, and her sister Addie Thompson, her only living sisters, but none of the Wiggins family came. Mr. Wiggins now has a second wife. This morning we had our home Christmas tree in my room, before they went to Howard's. Geo's family were invited but Otis is so sick that Estelle could not come. Geo. came with Olga and Georgiana, and the little girls were indeed delighted with little dolls, books and rocking chair. Jim helped Celeste get up the tree, a part of last night-s church tree. Will Moore and Elizabeth W. besides Jim and Theresa constituted the entire company, and all were well remembered. After lunch, all went to the weddings. The ceremony did not take place till after the coming of the train, which was a little late. Rev. Robinson officiated, and Chester and Alma stood up with them. Lottie made a pretty bride, dressed in white with the bridal veil and a bouquet of white carnations and asparagus ferns. The house was beautifully decorated in white and purple, with holly berries and mistletoe, and a sumptuous dinner was served. Mr. Cooke was the only one who came from his family, and instead of going there straight from the train, as he should have done, because they were waiting for arrivals by train, he came here, found me alone, and I hurried him over there, but after all, he was too late for the ceremony much to his disgust. I gathered and put 25 Silver Dollars in a box for Howard and Lou, with a letter of presentation, and Lou was so pleased, that she had the letter read aloud to the assembled company, with the list of donors. Mr. Cooke came back here afterwards but wished to call on Geo. and the sick baby, so stopped only a minute and left again by train, so as to meet his morrow's preaching appointments. Lottie and Mr. Anderson went to Lodi by carriage and departed for Fresno. Here follows a list of my Christmas gifts - I had also four Post-Cards: 2 Hdkfs. from Alice Hammond and Miss Cain. 40 Red-Cross Stamps from Hester Cooke. 2 Hot Iron Holders - patent - from Ada. Stand Cover - beautiful - from Adelaide. Photos - from Hannah (the church), Eunice (Webster Family), Nellie & Mr. B. and Willard Calendar - from Myrtle Hammond, very pretty. Doilly - from Mrs. Ober, made in Marden, Turkey, by girls of Mission School. Tray cloths - from Theresa and Susie Pascoe. Wall Card - very handsome - from Ada.

Dec. 26. Sabbath. Theresa and Jim are here and attended church with the others. Then at one o'clock we had our Christmas chicken dinner with Geo's family invited, but Estelle could not come here as Otis is so sick she could neither leave nor bring him. George came with Olga. Lou called, also Nellie and Ed. Bergquest. The latter brought me their wedding photos as a Christmas gift. Our Church also received a gift of $25. from Aunt Susie. Morning foggy. (T.S.R. 36. 2 P.M. 46. S.S. 42.)

Dec. 27. Monday. Theresa and Jim went on A.M. train, and Estelle with them taking Otis and Olga, as Estelle wishes Theresa's help in preparing the food prescribed by Dr. Young for the baby, and Olga is croupy. Lou is keeping Georgiana and has Geo. to eat with them while Estelle is absent. Lou is never too busy with her large household so that she is not ready to do a kindness to her neighbors. Received a letter from Lizzie McLellan and wrote to Eureka. (T.S.R. 36. 2 P.M. 53. S.S. 48.)

Dec. 29. Wednes. Received letters from Alma and Hester Cooke and Louise Locke, and best of all, from my dear son Horace, who has not before written to me for about ten years. No wonder I hailed his good letter with delight. Louise writes of her College life in Simmons College, Boston. She enjoys it greatly. Wrote postal to Theresa. (T.S.R. 30. 2 P.M. 50. S.S. 46.)

Dec. 30. Thurs. Rainy. Have written to Horace Mann a birthday letter. We learn that the grain millionaire - McNear - for whom Weldon Cooke has been working as chauffeur for perhaps a year, died yesterday. His death has not been unexpected as he has been so feeble for a long time that he could not sit up in his auto, but lay on a couch as he went about his business. (T.S.R. 40. 2 P.M. 48. S.S. 46.)