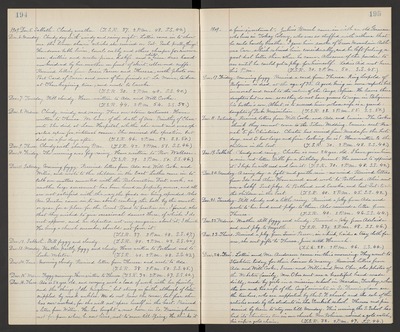 Dec. 6. Monday. Cloudy day with windy and rainy night. Lottie came in to show me the "linen shower" articles she received on Sat. Such pretty things! Handsome table linen, towels costly and others cheaper for common use, doillies and center-pieces, hdkfs. and a white linen dress hand-embroidered by her mother on front of skirt, collar and cuffs. Received letters from Susie Pascoe and Theresa, with photo on Post Card of Susie and some of her friends at La Moine, taken at Thanksgiving time, and wrote to Eureka. (T.S.R. 30. 2 P.M. 40. S.S. 40.)

Dec. 8. Wednes. Cloudy, windy and rainy. Thus our storm continues. Have written to Theresa. We learn of the death of Mrs. Priestley of Clements. She died at Lane Hospital, whether she went and was operated upon for internal cancer. She survived the operation but died in a few days after. (T.S.R. 46. 2 P.M. 52. S.S. 50.)

Dec. 11. Saturday. Morning foggy. Received letters from Ada and Will Cooke and Willie, and wrote to the children in the East Luther came in to talk over matters connected with the Reclamation Dist. work, as another large assessment has been levied on property owners, and all are not satisfied with the way the funds are being expended. Also Mr. Dustin came in to see about renting the hall by the month or year, for a place for the Cornet Band to practise in. I found also that they wished to give occasional dances there, of which I do not approve, and he departed not very sanguine about it, I think. He being a church member, should not favor it. (T.S.R. 37. 2 P.M. 48. S.S. 47.)

Dec. 16. Thurs. Ada is 52 yrs. old, and carrying such a load of work with her family and the "things of the kingdom", but strong in faith, although of late crippled by weak ankles. We do not know the cause, but fear she has over-worked, for she will not spare herself in the least. Received a letter from Willie. He has bought a new home in So. Framingham not far from where he now lives, not to move till Spring. He thinks it

1909. a fine investment. Julius Bruml came in with an old German who lives in Tokay Colony, who was so stuffed with asthma that he could hardly breathe. I gave him smoke of Green Mountain Asthma Cure, which relieved him considerably, and he left feeling a great deal better than when he came. Also some of the powder to use until he could get a pkg. for himself. Ladies Aid met here this P.M. (T.S.R. 30. 2 P.M. 50. S.S. 45.)

Dec. 17. Friday. Morning foggy. Received a card from Theresa. King Leopold of Belgium is dead, at the age of 75. A good king in some respects but immoral and cruel to the natives of the Congo, Africa. He leaves three daughters but no son, so as they do not have queens to reign in Belgium his brother's son, Albert, is to succeed him whose wife is a grand-daughter of Duke Maximilian. (T.S.R. 28. 2 P.M. 55. S.S. 50.)

Dec. 18. Saturday. Received letters from Will Cooke and Ada and Eunice. The Cookes think they cannot come to the Silver Wedding. Eunice sent Hannah $5. for Christmas. Chester has arrived from Nevada for the holidays, and O how large and fine looking he is! Have written to the children in the East. (T.S.R. 30. 2 P.M. 48. S.S. 44.)

Dec. 24. Fri. Lottie and Mr. Anderson came in this morning. They went to Stockton today for their license to marry. Received letters from Ada and Will Cooke, Irene and Willie and Mrs. Ober, also photos of the Webster family. Mrs. Ober sent me a beautiful hand-made doilly, made by girls in a mission school in Marden, Turkey, where the son and his wife of the Cong'l minister in So. Framingham are the teachers, who are supported by the S.F. church and the sale of the articles made by the students in the Turkish school. Theresa and Jim arrived by train to stay over till Monday. This evening, the S. School has had its Christmas tree in our church. Rev. Robinson received a gold watch, his wife a gold chain. (T.S.R. 32. 2 P.M. 47. S.S. 44.)