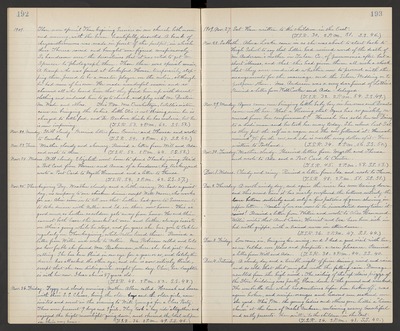 1909. There were special Thanksgiving Services in our church both morn and evening, with the house beautifully decorated. A bank of chrysanthemums was made in front of the pulpit, in which those Theresa raised and brought me figured conspicuously. So handsome were the decorations that it was voted to get Mr. Spencer to photograph them. Then there was special music. A tramp who was found at Lockeford House temporarily stopping there, proved to be a master player on the violin, although he had none of his own. He made wonderful music and so charmed all who heard him that they fixed him up with decent clothing and induced him to go to church, and play with Mr. Dustin Mr. Wade and others. This P.M. Mrs. Overholtzer, Estelle's sister came in bringing the babies. Little Otis is not thriving since he is changed to bottle feed, and Dr. Barbour thinks he has malaria, but he is now improving. (T.S.R. 53. 2 P.M. 62. S.S. 58.)

Nov. 25. Thanksgiving Day. Weather cloudy and a little rainy. We had a quiet day, no company to our chicken dinner except Will Moore, who works for us. Alice came in to tell me that Luther had gone to Sacramento to take dinner with Nellie and Ed. in their new home. This is good news, as Luther so seldom gets away from home. He and Alice cannot both leave the market at once and Luther always insists on Alice's going while he stays, and for years she has gone to Oakland regularly on Thanksgiving, while Nellie lived there. Received a letter from Willie and wrote to Nellie. Mrs. Robinson called and told us how feeble she found Mrs. Brakeman, where she had just been calling. She has been blind in one eye for a year or so, and lately the disease has attacked the other eye, and she is now entirely blind, except that she can distinguish night from day. Olive, her daughter is with her now. I hear she is 87 years old. (T.S.R. 48. 2 P.M. 52. S.S. 48.)

Nov. 26. Friday. Foggy and cloudy morning. Mother Allen called. Hannah and Laura with their S.S. Classes, being the older boys and the older girls, were invited and went in the evening to Will Young's for a Class Party. There were present 9 boys and 9 girls. They took a "hay ride" altogether and enjoyed the bright moonlight going down, and observed the total eclipse on their way home. (T.S.R. 36. 2 P.M. 49. S.S. 46.)

Nov. 28. Sabbath. Alma Locke came in as she was about to start back to High School to say that Lottie had received word of the death of Mr. Anderson's mother in Tulare Co., of pneumonia after but a short illness, and that this had given them all such a shock that they were undecided whether now to proceed with the arrangements for the marriage and the Silver Wedding or to postpone them. Mrs. Anderson was a very dear friend of Lottie's. Received a letter from Will Cooke and Ada - delayed. (T.S.R. 32. 2 P.M. 54. S.S. 49.)

Nov. 29. Monday. Agnes came over bringing little baby boy in her arms and Donald came with her. What a blessing that Agnes has so quickly recovered from her confinement! Hannah has sold her cow Daisy to a Lodi man and he took her away today. She calved last Sat. so they put the calf in a wagon and the cow followed it. Hannah received $75. for the cow, and she is worth every dollar of it. Have written to Portland. (T.S R. 34. 2 P.M. 56. S.S. 50.)

Dec. 2. Thursday. A north windy day, and again the river has come tearing down and this second time it has nearly overflowed the bottoms entirely - the lower bottom entirely and only a few patches of green showing in upper bottom. Wonder if we are now to be inundated every time it rains! Received a letter from Willie and wrote to Alice Hammond. Willie writes that Aunt Carrie, Harriet and Eva have been sick in bed with grippe, with a trained nurse in attendance. (T.S.R. 36. 2 P.M. 47. S.S. 44.)

Dec. 4. Saturday. A cloudy day and a terrible night of fierce driving wind and rain and so cold that sleet mingled with the falling rain. Damage resulted from the high wind. The sailing of the up-stairs piazza of the Store building was partly blown down to the ground and wrecked. The umbrella tree which has sometimes before been broken off, was again broken, and unripe oranges and lemons were scattered over the yard. This P.M. the young ladies and others gave Lottie a "linen shower" at the home of Mabel Ambrose, containing many beautiful and costly presents. Have written to the children in the East. (T.S.R. 26. 2 P.M. 41. S.S. 40.)