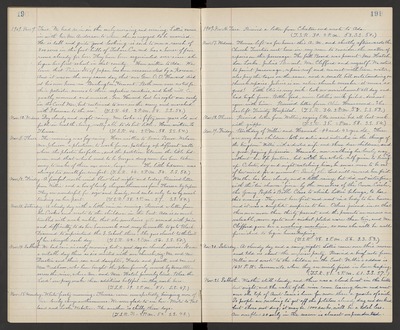 1909. Nov. 9. Tues. We had rain in the early morning and evening. Lottie came in with her Mr. Anderson to whom she is engaged to be married. He is tall and quite good-looking - is said to own an ranch of 800 acres in the foot-hills of Tulare Co. and has a house of five rooms already for her. They have been acquainted ever since she began her first school in that county. Have written to Ada. We learn that Prince Ito of Japan has been assassinated by a Korean. And it was on the very same day that our Gen. O.O. Howard died at his own home in Burlington, Vermont. Both men were noted for their patriotic services for their respective countries, and both will be greatly mourned and missed. Gen. Howard lost his right arm early in the Civil War, but continued to serve in the army and marched with "Sherman to the sea". (T.S.R. 48. 2 P.M. 58. S.S. 52.)

Nov. 11. Thurs. The morning was fog rainy. Have written to Susie Pascoe. We have Mr. Johnson, a plasterer, to work for us, patching up different walls where the plaster has fallen, and the partition between the little bedroom and that which used to be George's drug room has been taken away, to make of the one nice, large room. The little bedroom was always too small for comfort. (T.S.R. 44. 2 P.M. 54. S.S. 50.)

Nov. 12. Friday. A fearful north wind blew last night and today. Received letter from Willie and a box of lovely chrysanthemums from Theresa by Express They are wonderful for size and beauty, and could only be so by much tending on her part. (T.S.R. 38. 2 P.M. 57. S.S. 54.)

Nov. 13. Saturday. A cloudy day with a little rain in evening. Received a letter from the Cookes and wrote to the children in the East. Ada is so much troubled with weak ankles that she sometimes gets around with pain and difficulty to do her housework and may be unable to go to Black Diamond to superintend the S. School there. She goes almost to the limit of her strength each day. (T.S.R. 42. 2 P.M. 56. S.S. 50.)

Nov. 14. Sabbath. We had rain in early morning but a good day in church services. It was a notable day there as six united with our church, viz: Mr. and Mrs. Dustin and their son and daughter, Freda and Jewett, and Mr. and Mrs. Needham, who have bought the place formerly owned by Hosea Allen across the river, where Mr. and Mrs. Hatch formerly lived. Bless the Lord! we pray make these additions helpful in thy work here. (T.S.R. 39. 2 P.M. 51. S.S. 47.)

Nov. 15. Monday. White frosty morning. Theresa came unexpectedly bringing more of her lovely chrysanthemums. We were glad to see her - Wrote to Portland and Locke Webster. The weather is chilly these days. (T.S.R. 31. 2 P.M. 52. S.S. 48.)

Nov. 17. Wednes. Theresa left us for home this A.M. and shortly afterwards the Church Trustees met here in my room to consider the matter of repairs on the parsonage. The full Board was present - Mrs. Hatch, Lou Locke, Julius Bruml, Mr. Clifford and myself. We voted to paint parsonage, repair roof and connect with town water, also pay the taxes on the same and a small bill outstanding on church repairs. Julius is an active church member - it seems so good! Little Otis is very sick - took no nourishment all day and had high fever. Bottle food, since Estelle's milk failed, does not agree with him. Received letter from Alice Hammond. She has left Trinity Hospital. (T.S.R. 34. 2 P.M. 58. S.S. 53.)

Nov. 19. Friday. Birthday of Willie and Hannah - 44 and 42 yrs. old. These are very dear children - both so active and interested in the "things of the kingdom". Willie with devoted wife and three dear children, and a good, paying profession. Hannah, now walking her lonely way without her life partner, but with her whole self given to bringing up Celeste, day and night watching him, he seems [?] to be out of her mind for a moment. Surely the Lord will reward her for it. Weather has been cloudy and a little rainy, but did not interfere with the "tin shower" given by the members of the "Crown Circle", the Young People's Bible Class to which Lottie belongs, to her this evening. They met here first and went in a body to her house and it was a complete surprise to her. Others joined in so that there were more than thirty present, and the presents numerous and valuable, more agate and nickel-plated ware than tin, and Mr. Clifford gave her a washing machine, so now she be well furnished to begin housekeeping. (T.S.R. 48. 2 P.M. 56. S.S. 53.)

Nov. 20. Saturday. A cloudy day and a rainy night. Lottie came over this morn and told us about the surprise party. Received a brief note from Nellie and wrote to the children in the East. Nellie's address is 1631 P. St. Sacramento, where they are nicely fixed in housekeeping. (T.S.R. 51. 2 P.M. 61. S.S. 57.)

Nov. 21. Sabbath. Weather still cloudy, and there was a cloud burst in the hills last night, and the water of the river came tearing down and went over the top of Aunt Susie's levee for more than a quarter of mile. So people are rushing to get off the potatoes already dag and sacked but those not dug, it may be 1000 sacks, will be a total loss. An overflow so early in the season is almost unprecedented.