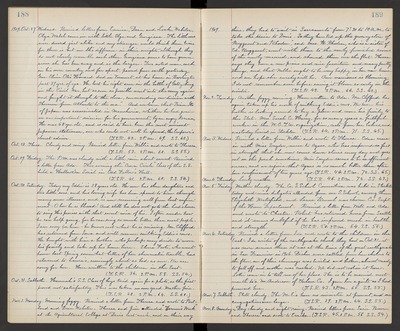 1909. Oct. 27. Wednes. Received letters from Eunice, Dean and Locke Webster. Olga Walsh came in with little Olga and Georgiana. The little ones were dressed just alike and any stranger would think them twins for there is but one lb.'s difference in their weights, although they do not closely resemble each other. Georgiana seems to have grown since she has been away and is the larger. Two noted men, each in his own country and far apart, passed from earth yesterday. Gen. Oliver Otis Howard died in Vermont, at his home in Burlington past 89 yrs. of age. He lost his right arm in the battle of Gettysburg in the Civil War, but as soon as possible went into the army again and fought it through to the close, commanding one division with Sherman "from Atlanta to the sea". And we learn that Prince Ito of Japan was assassinated in Manchuria, whither he had gone on an important mission for his government, by an angry Korean. He was 68 yrs. old, and is said to have been the most eminent Japanese statesman, one who could not well be spared, the Emperor's closest adviser. (T.S.R. 42. 2 P.M. 69. S.S. 60.)

Oct. 30. Saturday. Today my Eddie is 38 years old. He now has three daughters and two little ones, and his loving wife has been spaced to him through many severe illness, and is now recovering well from last confinement. O how he is blessed! And still he does not go to the Lord's house to sing His praises with that sweet voice of his. I often wonder how he can help going, for he can sing so much better than most people. I am sorry for him - he knows not what he is missing. Mr. Clifford has returned from Iowa and will resume milking Eddie's cows. He brought with him a brother who perhaps may decide to move his family and take up his home here. Elvera Foote, who went home last Spring somewhat better of her rheumatic trouble, has returned to Laura's, seemingly about as bad as ever. We are sorry for her. Have written to the children in the East. (T.S.R. 36. 2 P.M. 58. S.S. 54.)

Nov. 1. Monday. Morning foggy. Received a letter from Theresa and wrote to Portland and Dean Webster. Theresa and Jim attended "Farmer's Week" at the Agricultural College at Davis last week, and on their way

1909. there, they had to wait in Sacramento from 7:30 to 10 A.M. to take the train to Davis. So they hunted up the grocery store of "Bergquest and Rhoden", and Mrs. Rhoden, who is a sister of Ed. Bergquest, went with them to the newly-furnished rooms of the newly-married, and showed them over the flat. Theresa says they have a new piano and nice furniture and many pretty things, and that Nellie ought to be very happy in her new home and we hope she surely will be. Our narcissus is blooming. I do not remember ever before seeing it bloom so early in the winter. (T.S.R. 43. 2 P.M. 66. S.S. 62.)

Nov. 2. Tuesday. Another foggy morning. Have written to Ada. Mr. Clifford has again taken up his work of milking Eddie's cows. We hear his brother is looking around to buy a place and move his family to this State. Mrs. Sarah C. Harry, for so many years a faithful worker in the W.C.T.U. organization, rests from her labors, and was today buried in Stockton. (T.S.R. 44. 2 P.M. 71. S.S. 65.)

Nov. 3. Wednes. Received a letter from Willie and wrote to Theresa. Edna came in with Miss Snyder, nurse to Agnes, who has improved so fast in strength that she now comes down stairs every day and goes out on the porch sometimes. Miss Snyder seems to be an efficient nurse, and we rejoice that Agnes is so much better than after her confinement of two years ago. (T.S.R. 46. 2 P.M. 72. S.S. 65.)

Nov. 5. Friday. Weather cloudy. The Co. S. School Convention was held in Stockton today and nine delegates attended from our S. School, among them Elizabeth Westerfield, and Laura Bruml was chosen Co. Supt. of the Home Department. Received a letter from Will and Ada and wrote to Chester. Robert has returned home from Seattle and it seems doubtful if he has improved much in health and strength. (T.S.R. 50. 2 P.M. 64. S.S. 56.)

Nov. 6. Saturday. Received a letter from Ida and wrote to the children in the East. Ida writes of the earthquake shock they had on Oct. 21 - it was more serious than it was the time of the great earthquake in San Francisco in 1906. Dishes were rattled from her shelves to the floor, one of their chimneys was twisted and broken, almost ready to fall off, and another was cracked. We did not notice it here. Lottie came in to tell me of her plans. She is to be married next month to a Mr. Anderson of Tulare Co. I gave her a quilt as I had promised her. (T.S.R. 43. 2 P.M. 60. S.S. 55.)