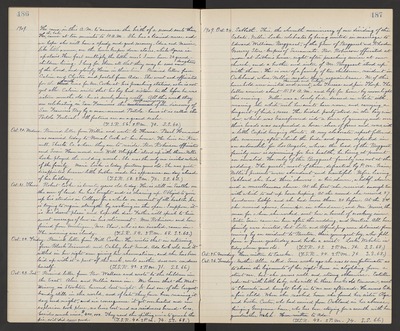 1909. He came in this A.M. to announce the birth of a second son to them. He the babe came at ten minutes to 10 A.M. She has a trained nurse and we hope she will have a speedy and good recovery. Edna and Marie, like little women, are the housekeepers down stairs, while Agnes is up-stairs. How fast multiply the little ones! I now have 34 grandchildren living. I long for them all that they may be sons and daughters of the Lord, and glorify Him in their lives. Received letters from Calvin and Chester and postal from Ada. She went and officiated for the fourth time for Mr. Cooke at his preaching stations, as he is not yet able. Calvin writes that his boy had sixteen teeth before he was sixteen months-old he is surely doing well. All this week they are celebrating in San Francisco the 140th anniversary of the discovery of San Francisco Bay by a man named Portola - hence it is called the Portola Festival. All features are on a grand scale. (T.S.R. 56. 2 P.M. 70. S.S. 60.)

Oct. 20. Wednes. Received letter from Willie and wrote to Theresa. Pearl Hammond was married today to Nowal Cook at her home. He lives in Kennett, Shasta Co. where they are to reside. Rev. Robinson officiated and Susie Hammond and Will Whipple "stood up" with them, Nellie Locke played the wedding march. She was the only one invited outside of the family. Marie Locke is today fourteen years old. She was quite disappointed because little brother made his appearance one day ahead of her birthday. (T.S.R. 50. 2 P.M. 72. S.S. 63.)

Oct. 21. Thurs. Robert Cooke is twenty years old today. He is still in Seattle on the acre of land he has bought and is clearing up. Obliged to give up his studies in College for a while on account of ill health he is trying to regain strength by working in the open. I suppose it is his "desert place" and hope the dear Father will speak to him sweet messages of love in his retirement. Mrs. Robinson and her friend from Michigan, Mrs. Shaw, who is an invalid, came in. The morning was cloudy. (T.S.R. 54. 2 P.M. 68. S.S. 62.)

Oct. 22. Friday. Received letter from Will Cooke. He writes that in returning from Black Diamond and Oakley last Mond. Ada took cold and it settled in her right arm giving her rheumatism, and she has been laid up with it a part of the week, could neither dress nor undress herself. (T.S.R. 42. 2 P.M. 71. S.S. 66.)

Oct. 23. Sat. Received letter from Rev. Wallace and wrote to the children in the East. Alice and Nellie came in. We learn that the West Winery in Stockton burned last night. It had one of the largest brandy stills in the world. and of late they have been running it day and night, and in consequence it got over heated and an explosion took place, no lives lost and no residences burned-loss, besides much wine, $400,000. They used the spilling wine to quench the fire, so it did some good. (T.S.R. 40. 2 P.M. 74. S.S. 68.)

1909. Oct. 24. Sabbath. This, the eleventh anniversary of our dividing of the Estate, Nellie Locke celebrates by being united in marriage to Edward William Bergquest, of the firm of Bergquest and Rhoden Grocery Store-keepers of Sacramento - Rev. Robinson officiated at noon at Luther's house, right after preaching service at our church, and a brother and sister of Mr. Bergquest "stood up" with them. He is one of a family of the children, resident in Oakland, where Nellie made their acquaintance. We, of this household were invited and went Hannah and Celeste, also Theresa and Jim Thorp. The latter arrived about 11:30 A.M. and left for home by moonlight this evening. Nellie was a lovely bride, dressed in white silk, wearing the white veil her aunts have worn, and carrying a bouquet of bride's roses. The bridal party stood in the bay window, which was transformed into a bower of greenery, and over their heads was suspended a horse-shoe of ferns and roses, with a little Cupid hanging thereto. A very elaborate repast followed the ceremony, after which the bride and groom departed in an automobile for Los Angeles, where the head of the Bergquest family now is sojourning for his health, he being at present an invalid. He only of the Bergquest family was not at the wedding. The guests, most of them, departed by P.M. train. Nellie's presents were abundant and beautiful. Before leaving Oakland she had three "showers" - a tin shower, a hdkf, shower and a miscellaneous shower. At the first she received enough tin with which to set up housekeeping. At the second she received 27 handsome hdkfs, and she had more than 20 before. At the 3rd she received aprons, linen &.c. in abundance, and Mr. Morris, the man for whom she worked, sent her a barrel of crockery since. Sister Susie came in here after the wedding, and Mertice. All her family were invited, but Lilla and Alfred Jory were detained from coming by an accident to Burton, their youngest boy, who fell from a fence yesterday and broke a wrist. Locke Webster is today eleven years old. (T.S.R. 43. 2 P.M. 76. S.S. 68.)

Oct. 26. Tuesday. Mother Allen called. Some weeks ago she was so unfortunate as to strain the ligaments of her right knee in alighting from a street car. but she seems well and strong otherwise. Estelle rode out with little baby, who will be three weeks old tomorrow, went to Clements, and brought baby in to see me afterwards. He seems like a fine child. When she reached home she found her sister Olga and brother Carter, who had arrived from Oakland in her absence, bringing Georgiana home, who has been staying for a month with her grandmother Walsh. Have written to Ada. (T.S.R. 42. 2 P.M. 74. S.S. 66.)