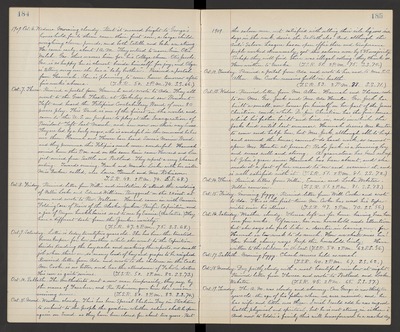 1909. Oct. 6. Wednes. Morning cloudy. But it seemed bright to George's household, for to them came their first son, a large child weighing eleven pounds, and both Estelle and babe are strong. He came early, about 1 A.M. They intend to name him Otis Walsh. Geo. thus names him for his College chum - Otis Jacobs. Geo. is so happy he is almost beside himself for joy, and Olga is telling every one she has a "baby brother". Received a postal from Hannah. She is planning to come home tomorrow after five weeks absence. (T.S.R. 50. 2 P.M. 74. S.S. 66.)

Oct. 7. Thurs. Received a postal from Hannah and wrote to Ada. They all went to the Greek Theater at Berkeley and saw President Taft and heard the Filipino Constabulary band of over 80 pieces play. This Band is one of the finest in the world and came to the U.S. on purpose to play at the Inauguration of President Taft last March, and are now on their way home. They are led by a burly negro, who is wonderful in the command he has over them. Hannah and Theresa have heard Sousa's Marine Band and they pronounce this Filipino much more wonderful. Hannah arrived home this P.M. and on the same train came Howard and Lou just arrived from Seattle and Portland. They report a very pleasant outing. Towards evening, Frank and Maude Locke with her sister Miss Decker called, also Laura Bruml and Mrs. Robinson. (T.S.R. 48. 2 P.M. 74. S.S. 68.)

Oct. 8. Friday. Received letter from Willie and invitation to attend the wedding of Nellie Locke and Edward Burgquest on the 24 inst. at noon, and wrote to Rev. Wallace. Howard came in with Souvenir Folding Case of Views of the Alaska-Yukon-Pacific Exposition and a jar of Oregon huckleberries sent to me by Eunice (the latter). They have different taste from the Yankee variety. (T.S.R. 47. 2 P.M. 75. S.S. 68.)

Oct. 9. Saturday. Lottie is today twentytwo years old. She has been the trusted housekeeper for her mother while she went to the Exposition besides tending the hay scales and making the reports, no small job when there are so many loads of hay and grapes to be weighed. Received letter from Ada and wrote to the children in the East. Mr. Cooke is no better, and has the attendance of Fabiola doctors. His case is quite serious. (T.S.R. 50. 2 P.M. 82. S.S. 73.)

Oct. 11. Mond. Weather cloudy. This has been Special Election Day in Stockton to submit to the people the question whether saloons shall be open again on Sund. as they have been closed for about two years. But

1909. the saloon men, not satisfied with selling their vile liquor six days in the week, desire the Sabbath also. And although the Anti-Saloon League has an open office there and temperance people worked strenuously, yet the saloons won by 585 majority. Perhaps they will find, there was illegal voting - they think so. Have written to Eureka. (T.S.R. 51. 2 P.M. 75. S.S. 70.)

Oct. 13. Wednes. Received letter from Mrs. Allen. Hannah and Theresa rode to see Mrs. Geo. Jack and Mrs. Ada Hunter. Geo. Jack has built a small, new house for himself on her part of the James Christian ranch, while Dr. Jim Christian has the fine house which his father built and live in, and in which the Jacks lived until last summer. Hannah desires Mrs. Hunter to come and help her, but Mrs. Jack, although able be up and around the house, cannot do hard work, so cannot spare Mrs. Hunter at present. Baby Jack is a bouncing boy and seems well and strong. A gravestone has been set up at John's grave since Hannah has been absent, and she made it a part of her errand to see and examine it, and is well satisfied with it. (T.S.R. 51. 2 P.M. 81. S.S. 72.)

Oct. 16. Saturday. Weather cloudy. Theresa left us for home having been here over five weeks. Of course, her own household needs attention but she says she feels like a deserter in leaving now, for Hannah is too week to do much. How we shall miss her! Her brisk, cherry ways keep the household lively. Have written to the children in the East. (T.S.R. 50. 2 P.M. 63. S.S. 56.)

Oct. 19. Tues. The A.M. was cloudy and showery. Our George is now thirtytwo years old - the age of his father when we were married, and he has wife and little ones three. I wish I could add he was in good health, physical and spiritual, but he is not strong in either. And now to Eddie's family this will hence forward be a marked day.