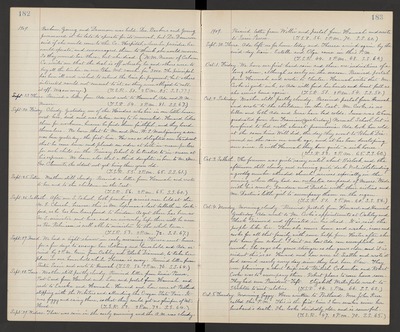 1909. Barbour, Young and Dameron was held. Dr. Barbour and Young pronounced it too late to operate for its removal, but Dr. Dameron said if she would come to Co. Hospital, where he presides, he would operate, and encouraged them to think she would recover. So they moved her there, but she died. (W.M. Nuner of Calaveras Co. writes one that the deal is off whereby he and others were to buy all the timber on our Blue Mt. ranch for $3000. The principal has been ill and wished to extend the time for payment, but others interested would not consent to it, so they were obliged to call it off. We are sorry.) (T.S.R. 50. 2 P.M. 85. S.S. 77.)

Sept. 24. Friday. Cloudy. Yesterday one of the Hinders who live in our little house next here, died and was taken away to be cremated. Howard likes them for workmen, because he finds them faithful, and they board themselves. We learn that to Mr. and Mrs. W.S. Montgomery a son was born yesterday - the first heir. He was so delighted over its advent that he came down and placed an order at both ice-cream parlors for each child in the Primary School to be treated to ice-cream at his expense. We learn also that a third daughter is born to Mr. & Mrs. Geo. Clements, the eldest not yet being three years old. (T.S.R. 55. 2 P.M. 65. S.S. 61.)

Sept. 26. Sabbath. After our S. School, both preaching services were held at the M.E. Church, because this is Mr. Lopeman's last Sabbath in Lockeford, as he has been transferred to Linden. As yet there has been no M.E. minister sent here, and we sincerely hope there will be none as Rev. Robinson is well able to minister to the whole town. (T.S.R. 53. 2 P.M. 72. S.S. 67.)

Sept. 27. Mond. We had a light shower in early morning. Theresa went home for a few days to arrange her clothing and household and Ada arrived by 2 P.M. train from Oakley and Black Diamond, to take her place in our household while Theresa is away - Received letter from Sister Susie and wrote to Hannah. (T.S.R. 56. 2 P.M. 76. S.S. 64.)

Sept. 28. Tues. Weather still partly cloudy. Received letter from Susie Pascoe, Post-Card from Howard and Lou and postal from Hannah and wrote to Eureka and Hannah. Howard and Lou were at Portland stopping with the Websters and attending the Oregon State Fair. It was foggy and rainy there, so that they could get no glimpse of Mt. Hood. (T.S.R. 52. 2 P.M. 72. S.S. 64.)

Sept. 29. Wednes. There was rain in the early morning and the A.M. was cloudy.

Oct. 1. Friday. We have our first hard rain and there are indications of a long storm, although so early in the season. Received postal from Hannah and wrote to Chester. Hannah writes that Mr. Cooke is quite sick, so Ada will find her hands and heart full as she arrives home again. (T.S.R. 51. 2 P.M. 54. S.S. 50.)

Oct. 2. Saturday. Weather still partly cloudy. Received postal from Hannah and wrote to the children in the East. Mr. Cooke is no better and both Ada and Irene have bad colds. Irene was to have graduated from San Francisco (yesterday) Normal School, but is confined to bed with almost pneumonia. Ada took her cold at the same time Will did, the day they went to Black Diamond in the rain one week ago, and it has been developing ever since. So with Hannah they have quite a sick house. (T.S.R. 52. 2 P.M. 65. S.S. 60.)

Oct. 3. Sabbath. The forenoon was quite rainy until about 11 o'clock, and the afternoon still cloudy and evening quite dark. Notwithstanding a goodly number attended church services especially in the evening when they had an orchestra composed of Messrs. Wade with his cornet, Knudsen and Dustin with their violins and Mr. Dustin's little girl to accompany them on the organ. (T.S.R. 51. 2 P.M. 60. S.S. 56.)

Oct. 4. Monday. Morning cloudy. Received postals from Howard and Hannah. Yesterday Ada went to Mr. Cooke's appointments at Oakley and Black Diamond and officiated in his stead. It is said the people like her. Then she comes home and washes, irons and cooks for all that family, with some help from Hester after she gets home from school. I don't see how Ada can accomplish so much. She says she grows stronger as she grows older, and it is evident this is so. Howard and Lou were at Seattle and wrote it had rained nearly every day since they had been there. They were planning a short trip into British Columbia and Robert Cooke was to accompany them. Robert plans to come home soon. They had seen President Taft. Elizabeth Westerfield went to Stockton to visit relatives. (T.S.R. 46. 2 P.M. 66. S.S. 62.)