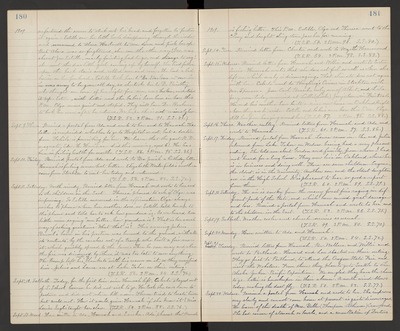 1909. unfastened the screen to stick out his head and forgotten to fasten it again - Estelle saw her little heels disappearing through the window and screamed to Alma Hartwell to run down and pick her up - But Alma was so frightened, she ran the other way (Geo. was absent) so Estelle, nearly fainting had to go, and strange to say! she met the dear little girl coming up by herself. She had fallen upon the back stairs and rolled over and over. She had a bad bruise on her forehead. Estelle took her to Dr. Barbour at once but he was away to be gone all day, so she took her to Dr. Priestly who thought one bone of her right fore arm was broken, and tied it up. Estelle, with Lottie and the babies have been in here this P.M. Olga seems quiet and stupid. They will have Dr. Barbour to look her over after he returns. We hope she is not seriously hurt. (T.S.R. 52. 2 P.M. 91. S.S. 81.)

Sept. 9. Thurs. Received a postal from Ada and wrote to her and to Hannah. The latter is undecided whether to go to Hospital or not, but a doctor from Fabiola is prescribing for her. We learn that the great R.R. magnate, Edw. H. Harriman died this morning, aged 61. He has been in failing health for months. (T.S.R. 56. 2 P.M. 95. S.S. 81.)

Sept. 11. Saturday. North windy - Received letter from Hannah and wrote to her and to the children in the East. Theresa phoned to ask of Olga was improving. So Estelle answered in the affirmation. Olga always wishes to phone when her mother does, so Estelle hold her up to the phone and told her to ask how grandma is. So we heard her little voice saying "me better, how grandma is?" "That is her usual way of asking questions - "What that is?" This evening Julius Bruml's barn in his pasture was burned to the ground, with all its contents, by the careless act of a tramp who built a fire near it, which quickly spread to the barn. Then he ran away and when the fire was discovered by others, it was too late to save anything. The tramp left his roll of blankets with his name on it, so they may find him. Julius and Laura are at Lake Tahoe on their outing. (T.S.R. 56. 2 P.M. 84. S.S. 76.)

Sept. 12. Sabbath. Today, for the first time since Hannah left, Celeste stayed out of S. School because he did not wish to go. He took the cows down to pasture and did not return till noon. Theresa tried to locate him but could not. How it would grieve Hannah if she knew it! Miss Louise Inglis taught her class. (T.S.R. 50. 2 P.M. 88. S.S. 76.)

Sept. 13. Mond. Have written to Ada, Hannah and Eureka. Ada phoned that Hannah

Sept. 15. Wednes. Received letters from Hannah and Willie and wrote to Sister Susie. Hannah writes that she does not feel so well as when she left us, which surely is discouraging. That climate does not agree with her. Celeste went to Ringling's Cirens in Stockton with Mr. Spencer. Jesse Earl Bruml, only son of Albert, and Lila Jory were today married at Lilla (Locke) Jory's home in Fruitvale. He and his mother have built a nice, new home on Oakland Heights where they are to reside. Estelle and babies were this P.M. Olga still has fever hanging around her. (T.S.R. 57. 2 P.M. 95. S.S. 88.)

Sept. 17. Friday. Received postal from Hannah. Laura came in. She and Julius returned from Lake Tahoe on Wednes. Having had a very pleasant outing. She told me about Gordon and family, from whom I had not heard for a long time. They now live in Oakland, where he is in business and doing well. There are seven children. Eugene, the oldest, is in the University. Another son and the oldest daughter are in the High School. It is pleasant to hear so good a report from them. (T.S.R. 60. 2 P.M. 89. S.S. 79.)

Sept. 18. Saturday. The air is smoky from the many forest fires raging in different parts of the State, and which have caused great damage and loss. Received a postal from Hanna and wrote to her and to the children in the East. (T.S.R. 52. 2 P.M. 88. S.S. 75.)

Sept. 21 Tuesday. Received letters from Hannah, Rev. and Willie and wrote to Portland - Howard and Lou started on their outing. They go first to Portland, to attend to the Oregon State Fair and visit the Webster. From there they plan to go to Seattle to the Alaska-Yukon-Pacific Exposition. We are glad they have the chance to go. Lottie is housekeeper in their absence. A north wind blows today, making the dust fly. (T.S.R. 50. 2 P.M. 82. S.S. 77.)

Sept. 22. Wednes. Received a postal from Hannah and wrote to her. She improves very slowly and cannot come home at present is quite discouraged. We learn of the death of Mrs.Belle (Thompson-Athearn) Crawford. She had cancer of stomach of bowels, and consultation of Doctors