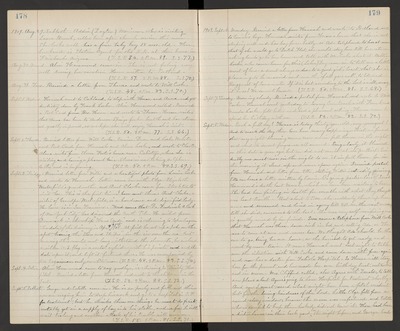 Sept. 1. Wednes. Hannah went to Oakland, to stop with Horace and Anna, and get dentistry done by Frank Locke. Alice Hammond called - Received a Post Card from Bro. Horace and wrote to Theresa. Horace writes that Anna has been to Anderson Springs for her health and has returned greatly improved, so we hope she will enjoy Hannah's visit. (T.S.R. 50. 2 P.M. 77. S.S. 66.)

Sept. 2. Thurs. Received letters from Will Cooke, Eunice, Dean and Locke Webster, and Post Cards from Hannah and Alma Locke, and wrote to Chester. Alma, writes from Elvera Foote's home near Calistoga, where she is visiting and having a pleasant time. Elvera is now taking sulphur baths and is improving. (T.S.R. 50. 2 P.M. 80. S.S. 69.)

Sept. 3. Friday. Received letter from Willie and a beautiful photo from Louise Locke and wrote to Hannah. Lottie came in with Olga. Elizabeth Westerfield's grandmother and Aunt Clarke came from Stockton to visit her. This is the first time I have met them. Aunt Clarke, a sister of Grandpa Westerfield, is a handsome and dignified lady. Her home is in San Francisco. Word comes that Dr. Frederick A. Cook of New York City, has discovered the North Pole. He sailed from Denmark in the ship "Hans Egede" and is returning to Copinhagen. The date of the discovery is Apr. 21st 1908. At first he set up pole on the spot, bearing the "Stars and Stripes", in the ice over the sea, but knowing this would not long withstand the elements, he enclosed a silken U.S. flag in a metal cylinder with his private card and the date upon it, and left it fastened there. He was accompanied by two Esquimaux only, no white man. (T.S.R. 48. 2 P.M. 83. S.S. 74.)

Sept. 5. Sabbath. George and Estelle came in. He is so poorly and feeble and thin we are urging him to drop his work and go to a hospital in S.F. for treatment, but he thinks there are things he must do first notably get in a supply of hay into his stable, and we fear he will wait too long and another attack of his trouble will come on. (T.S.R. 55. 2 P.M. 81. S.S. 71.)

1909. Sept. 6. Monday. Received a letter from Hannah and wrote to Portland and to Eunice's boys. Hannah writes from Horace's house that she is not sleeping well and has hay fever badly, so Ada telephoned to her at once that if she would go to Dutch Flat, she would stay here till her return asking her to go her home and talk with Mr. Cooke about it Nellie. Locke, who came home for this (Labor) Day came in to tell me a little secret of hers - a secret always so dear to a good girl's heart, that she is planning to be married next month, if all goes well, to Edward Bergquest of Sacramento. If it is best according to the Lord's will, may it be so! We cannot know. (T.S.R. 50. 2 P.M. 81. S.S. 68.)

Sept. 7. Tuesday. Morning cloudy. Received a postal from Hannah and wrote to Will Cooke. Hannah went yesterday to Sunny Cove Beach with Frank and Maude Locke, felt better and had a pleasant outing. Theresa come to spend her birthday with us. (T.S.R. 52. 2 P.M. 82. S.S. 72.)

Sept. 8. Wednes. Such a full day! Theresa is today thirty years old, my youngest! And to mark the day there have been many happenings. First, we found that my night-blooming ceresis came out in full blossom in the night and shed its sweet fragrance all around. Singularly, it bloomed on this date a year ago, but we did not see it at its prettiest. Evidently one must rise in the night to see it in full bloom, for in the morning it closes up and never opens again. Received postal from Hannah and letter from Etta, stating Willie is steadily gaining. Etta encloses a letter written by Eunice C. giving particulars of Sarah Hammond's death last March, which we have been waiting to hear. She had been failing in health for months with what they thought was heart trouble. But about 5 P.M. she suddenly threw up her arms and screamed and lived in agony till 2 A.M. the next morn till she died, conscious to the last. She was very self sacrificing and is greatly missed by her friends. Soon came a telephone from Will Cooke that Hannah was there, down sick in bed, and calling Ada or Theresa to come at once and nurse her. We thought Ada should be the one to go, being her own home, so she hurried to get ready and went by noon train. It seems Hannah went last night to talk over the situation with Will Cooke and came down with fever again and now has a doctor from Fabiola Hospital. So Theresa will stay here for the present, and has made her own birthday treat, nut cookies and ice cream. Mrs. Clifford called, also Agnes with Donald, to talk over plans about Agnes going to Lane Hospital for treatment shortly. And now I must record what might have been a fatal accident but for the loving-kindness of the Lord, Little Olga fell from a second story window, because the seven was unfastened, and Estelle who is careful to keep them locked, did not know it. There had been a disturbance in their back yard in the night before, and George had