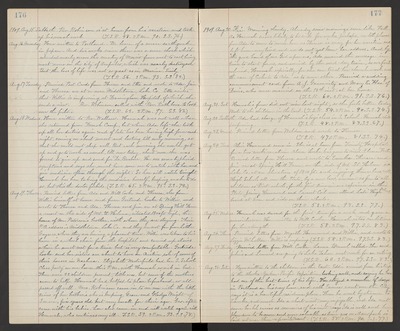 Aug. 16. Monday. Have written to Portland - We learn of a severe earthquake in Japan. And two weeks since there was a severe shock which extended nearly across the country of Mexico from west to east, being most severe in the city if Acapulco, which was nearly destroyed. But the loss of life was not so great as in Messina, Sicily. (T.S.R. 56. 2 P.M. 93. S.S. 82.)

Aug. 17. Tuesday. Received Post-Cards from Theresa and Etta and wrote to Ada - Jim and Theresa are at or near Middletown, Lake Co. Etta writes that Willie is improving at Framingham Hospital, of which she sends a view. Rev. Robinson called with Rev. Rathbone to look over the field. (T.S.R. 62. 2 P.M. 97. S.S. 83.)

Aug. 18. Wednes. Have written to Rev, Wallace. Hannah was not well when she returned from French Camp, but when Ada left she took up all her duties again and of late been having high fever each night, coming on about sunset and lasting till early morning, so that she could not sleep well. But each morning she would get up and go to work as usual, till now today, about noon she was forced to give up and send for Dr. Barbour. He sees some typhoid symptoms and says she must have some one to watch with her and give medicine often through the night. So Lou will watch tonight. Hannah has been taking the medicine herself, keeping awake to do so, but this the doctor forbids. (T.S.R. 65. 2 P.M. 95. S.S. 78.)

Aug. 19. Thurs. Received letters from Ada and Will Cooke and Theresa, also from Willie himself at home and from Gertrude Locke to Willie, and wrote to Theresa and Ada. Theresa and Jim are at Spring Hill Farm a resort on the side of Mt. St. Helena, situated 1800ft high, the home of Mr. Peterson's brother, with whom they are staying. Their P.O. address is Middletown, Lake Co. and they are not far from Little Geysers, where they are having a pleasant time. Willie was taken to his home in a wheel chair from the Hospital and carried up stairs where he must rest for a time but is very comfortable. Gertrude Locke and her sisters are about to have an Auction sale of some of their houses in Nashua. Elizabeth Westerfield had her S. School Class party on our lawn this P.M. with Hannah so sick in bed. There were 22 children present, little ones, but some of the mothers came to help, Hannah had helped to plan beforehand, so all passed off well. Mrs. Robinson came in to see me with the little twins of her brother's she is keeping, Grace and Gladys Wright of Sonora, five years old but very small for their age. Geo. after came with his babies. Lou also came in and will watch again with Hannah, who continues very ill. (T.S.R. 59. 2 P.M. 93. S.S. 78.)

1909. Aug. 20. Fri. Morning cloudy. Already some mornings seem like Fall. As Hannah seems likely to be sick for weeks, perhaps, we telephoned for Ada to come to nurse her as Theresa is away for her vacation and left home very tired and we do not yet know her address. And by "the good hand of our God upon us", Ada received the message in time to start for us, and arrived by the mid-day train, so we feel relieved, Hannah especially, for she can trust her church work and the care of Celeste to Ada as to none other. Received a wedding announcement card from A.J. Gaumnitz and Mary E. Flaa of Davis, who were married on the 18th inst. at her home. (T.S.R. 60. 2 P.M. 91. S.S. 76.)

Aug. 24. Tues. Alice Hammond came in. She is at home from Trinity Hospital for a two weeks vacation - Alma Locke has gone to visit Elvera Foote. Received letter from Theresa and wrote to Eureka. Theresa and Jim are at Spring Hill Farm, on the side of Mt. St. Helena in Lake Co. at an elevation of 1800 ft. and enjoying themselves well, High Schools all over the State, by a new law, are now as free to all children as Dist. schools, for the first time in our experience in this State. Jimmy Hammond and Earnest Coil now attend Lodi High School board at home and ride on their wheels. (T.S.R. 53. 2 P.M. 93. S.S. 77.)

Aug. 28. Satur. Have written to the children in the East - Eddie arrived from his trip to the Alaska-Yukon-Pacific Exposition, looking well, and saying he has had one of the best times of his life. he stayed a number of days in Portland on his way home, and with Eunice went over the City - says it is a beautiful residence place. Then he went by steamer to Eureka, and made Ida a short visit, very enjoyable, and Ida sent some burhl curios as souvenirs of his visit - says Ida is well and her place sure to be more valuable as times goes on. A new park is laid out near them - a favorite resort. (T.S.R. 58. 2 P.M. 90. S.S. 77.)