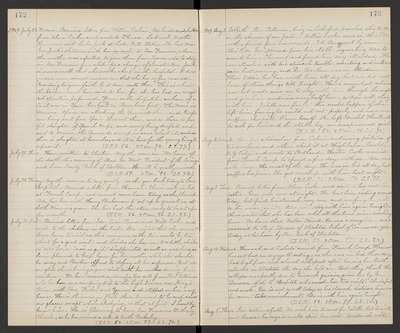 1909. July 28. Wednes. Received letters from Willie, Calvin, Adelaide and postal from Alma Cooke, and wrote to Theresa. Last week, Myrtle Hammond met Leslie Jack at Lodi R.R. Station. She had Mrs. Geo. Jack's children with her in route to San Francisco, where the mother was expected to join them from Sacramento, to stay in San Francisco for a while for a change of climate. Mrs. Jack is now so well that she walks about in the hospital. It does indeed seem almost miraculous that she has so far recovered. "According to your faith be it done unto thee." This is what the Saviour must have said to her, for she has had no surgical operation performed. From cable dispatches we learn of a Civil war in Spain, breaking out in Barcelona first. The Moors in Morocco, Africa, are attacking the Spaniards there, and troops are being sent from Spain to resist them, and as there is fearful slaughter of Spanish troops, and many being drafted and sent to Morocco, the Spaniards are up in arms about it, and so there is slaughter at home also, and it is hard for the young king to repress it. (T.S.R. 56. 2 P.M. 94. S.S. 77.)

July 30. Friday. Myrtle came in to say goodbye as she goes back today to Lane Hospital. Received a letter from Hannah. She is sick in bed at French Camp, and cannot come home today as she planned. Ada has been with Henry Brakeman to set up a gravestone at little Winnie's grave. She has had the stone ready to be set up for months. (T.S.R. 56. 2 P.M. 90. S.S. 73.)

July 31. Saturday. Received letters from Ida, Susie Pascoe and Will Cooke and wrote to the children in the East. Ida writes that she cannot leave home to visit us this summer, as the time would be too short for a good visit, and besides she has over 300 little chicks to care for, so Susie is quite disappointed as well as ourselves, as Susie planned to keep house for her mother while she should be away and Benton offered to defray all her expenses. But we are glad she is having a good visit with her mother during her vacation. We have received an unexpected call from Rev. Patterson who has been on a camping trip to the high Sierras near King's River, with Revs. Fisher and Yarrow, and stopped on his way home. He is thinner in flesh than he used to be and wears no glasses except while studying, so that at first I hardly knew him. He is planning to leave San Francisco Bethany Church, as he has received a call to North Berkeley. (T.S.R. 52. 2 P.M. 87. S.S. 72.)

1909. Aug. 1. Sabbath. Rev. Patterson, being in Lockeford, preached this A.M. in the absence of our pastor. Nellie Locke came in this P.M. with a friend from Sacramento - Ed Burgquest by name - This P.M. Geo. phoned from his stable requesting Ada to come to him. She went and found him very ill indeed. He was attacked with his stomach trouble, vomiting and intense pain last evening, and Dr. Barbour was in attendance - Then Eddie has been with him all day, but we did not hear of these things till tonight. He is somewhat relieved now but needs some one to stay with him through the night and give him medicine every half hour, so Ada will stay with him. Estelle was fearful this would happen if she left him, fearing he would not eat properly, and now we suppose she will blame herself. She left Mabel Hartwell to cook for him and the stable boy - an inexperienced girl. (T.S.R. 52. 2 P.M. 86. S.S. 72.)

Aug. 2. Mond. Received a Circular from Calvin, containing pictures of his new house and others about it at High lawn, Brooklyn N.Y. City, and wrote to Portland. Hester Cooke arrived from French Camp to spend a few days with us. Ada was with George the most of the day. He was in bed all day but suffers less pain. She got no sleep with him last night. (T.S.R. 52. 2 P.M. 94. S.S. 78.)

Aug. 3. Tues. Received letter from Alma Cooke and wrote to her and her father. Geo. rode over at night. He has been riding around today, but finds his stomach very sore and we fear he will be the worse for it. Ada will stay with him again tonight. Alma writes that she has been cold all the time since reaching home. We learn that Nellie Hurd, Emma's daughter, was married to Prof. Bessae of Stockton School of Commerce yesterday at her home by Rev. Sink of Stockton. (T.S.R. 56. 2 P.M. 97. S.S. 82.)

Aug. 4. Wednes. Hannah and Celeste arrived from French Camp. Hannah has not had an enjoyable outing, as she was in bed three days had high fever and almost collapsed after leaving her teeth extracted in Stockton the day she left us. But they think the collapse was partly due to too much quinine, given her by Dr. Dameron of the Co. Hospital who made her two visits. She is pale and weak. Geo. is not so well today, as his stomach distresses him and he cannot take nourishment, Ada is with him again tonight. (T.S.R. 58. 2 P.M. 99. S.S. 80.)

Aug. 5. Thurs. Geo. continues feeble. We wish him to send for Estelle but he will and because he says it would spoil her visit. Besides she writes